The Bruno Manser Fund (BMF), a Basel-based rainforest advocacy group, has filed a criminal complaint against UBS with Zurich’s public prosecutor over the bank’s ties with a Malaysian politician who controls logging in Sabah, North Borneo.

BMF accuses UBS of having breached its due diligence duties and calls on the Swiss authorities to take criminal action against the bank and those responsible for its relationship with the chief minister of Sabah, Musa Aman.

UBS has declined to comment on the accusations. UBS spokesman Yves Kaufmann said the bank complied with the legal requirements in the markets where it operated.

Aman has been chief minister of Sabah since 2003 and is the brother of Malaysia's foreign minister, Anifah Aman. He is accused of having laundered over $90 million (SFr86 million) in corruption proceeds through a number of bank accounts with UBS in Hong Kong and Zurich.

In April 2012, the Swiss Federal Justice Office confirmed that Switzerland had given legal assistance to Hong Kong authorities over Musa's ties with UBS.

According to BMF, documents handed in as evidence to the prosecutor's office prove that Michael Chia, a close associate of Aman, organised large cash payments from timber companies with logging interests in Sabah to UBS bank accounts in Hong Kong.

From the same accounts, payments were made to Musa Aman's sons in Australia and a senior forestry official from Sabah.

BMF is asking the prosecutor to take action in Switzerland under Swiss law against UBS and against UBS employees who have allegedly disregarded their due diligence duties in the Musa Aman case.

"How UBS ought to handle banking relationships with politically exposed persons (PEPs) is stated in the law and the Swiss Financial Market Supervisory Authority's (Finma) regulations. These rules were blatantly disregarded in that no suitable measures were taken for enforcing them,” the complaint states.

Corruption is one of the main drivers of deforestation in Sabah and Sarawak, the two Malaysian states on the island of Borneo, BMF claims.

The complaint was filed on behalf of BMF by Swiss lawyer and compliance expert Monika Roth.

The Basel-based Bruno Manser Fund campaigns for threatened tropical rainforests and the rights of their inhabitants.

It focuses its activities on the Penan people of Sarawak in particular and has projects in Malaysia and projects and campaigns in Europe.

It is financed by donations from private individuals, foundations and selected businesses. Individual projects also receive support from communal and cantonal funds.

After two decades of environmental campaigning for Malaysia’s Penan tribe, the Bruno Manser Fund (BMF) is stepping up its fight against local ... 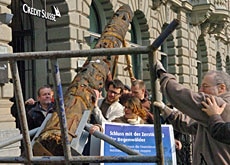 Switzerland's second-biggest bank, Credit Suisse (CS), is facing demands for the financial compensation of indigenous people over the destruction ... 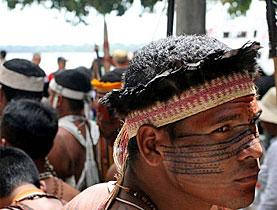 Indigenous peoples have been holding a mass and colourful protest at the World Social Forum in the Brazilian city of Belém against the destruction ...