When Switzerland won the under-17 World Cup exactly ten years ago, fans and the media feted the multicultural team and had dreams of them later lifting the “main” trophy. But while a couple of players have gone on to international success, many are playing in lower leagues – if at all.

It was an extraordinary and unexpected victoryexternal link. On November 15, 2009, Switzerland’s U17 team beat hosts Nigeria 1-0, having already knocked out teams including Brazil, Germany, Italy and Colombia. It remains the only time any Swiss team has won a football World Cup.

It was all the more remarkable given that it also remains the only time the Swiss U17 side has ever qualified for the tournament.

The story also had a social angle since most of the team, including the captain Frédéric Veseli, had an immigrant background. Indeed, Veseli now plays for Albania and Sead Hajrovic, who came on as a substitute, switched to Bosnia and Herzegovina.

Yet of the 21 players in the squadexternal link, only three have established a regular place in the national side: Haris Seferovic, who scored the winning goal in the final, Ricardo Rodriguez and Granit Xhaka. A noticeable omission is Xherdan Shaqiri, currently at European Champions Liverpool, who at 18 was just too old to play.

While fans who hoped for more international trophies remain disappointed – Switzerland’s main national team hasn’t made it past the last 16 in a World Cup since 1954 – its position in FIFA’s rankingexternal link improved from 83rd in 1998 to 8th in 2013. It is currently 13th.

Here’s a look at the various career paths of the history-making starting 11:

Frédéric Veseli (captain): Headed to England and in 2008 was signed by Manchester City and then Manchester United, but, like many young Swiss players tempted by offers from big foreign clubs, he struggled to get a first-team game. In fact Veseli didn’t make a single appearance for either club. He now plays for Empoli in the Italian second division. His last match for Switzerland was for the U21 team in 2012. He turned down call-ups from Kosovo but since 2015 has played for Albania.

Ricardo Rodriguez: Played for FC Zurich, Wolfsburg in Germany and, since 2017, AC Milan, who reportedly signed him for €17 million (CHF18.5 million). Has played for the national team 69 times.

Bruno Martignoni: Played for various Swiss clubs and is currently at Chiasso in the Swiss Challenge League (second division). No games for the national team.

Pajtim Kasami: Played in Italy, England and Greece before returning to Switzerland and FC Sion in the Super League (top division). Although he has played for the national team 15 times, the most recent appearance was several years ago.

Nassim Ben Khalifa: Was awarded the “Silver Ball” for being the second-best player at the U17 World Cup. FIFA highlightedexternal link his “blistering pace, exquisite technique and composure in the box”. He then joined Wolfsburg for a few years, followed by stints in Switzerland and Turkey before signing a one-year contract in July 2019 with Super League club Grasshoppers Zurich, where he had started his career. Played four times for the national team but not since 2012.

Haris Seferovic: Started at Grasshoppers and then played in Italy, Spain and Germany before settling at current Portuguese champions Benfica in 2017. Has played 61 times for the national team.

Benjamin Siegrist: Was awarded the “Golden Glove” for best goalkeeper at the World Cup – “one of the pillars of his team’s success”, according to FIFA. Played for several English clubs and Vaduz in Liechtenstein (which plays in the Swiss league) before joining Dundee United in the Scottish second division last year. No games for the national team.

Janick Kamber: Captained the U17 team in their semi-final against Colombia. Has always played in Switzerland and is currently at Super League side Neuchâtel Xamax. No games for the national team.

Charyl Chappuis: Started his career at Grasshoppers before moving in 2013 to Thailand, home of his mother. Currently at Muangthong United. He has played for Thailand, where he has a large following on social media, since 2014.

Granit Xhaka: Played for FC Basel and German club Borussia Mönchengladbach before signing to London club Arsenal for around £30 million (CHF38 million) in 2016. Born in Basel to Albanian parents (his brother plays for Albania), Xhaka was at the centre of the “double-eagle” controversy against Serbia at the 2018 World Cup. He currently captains Switzerland but was recently stripped of the Arsenal captaincy after clashing with fansexternal link. According to rumoursexternal link, he’s considering a move to AC Milan.

Of the remaining ten players in the 2009 squad, four no longer play football and the rest earn their living at Swiss clubs.

The Euro 2016 football championships have kicked off in Paris and Switzerland are once again the most multicultural of the 24 teams taking part.

By Thomas Stephens and Kai Reusser 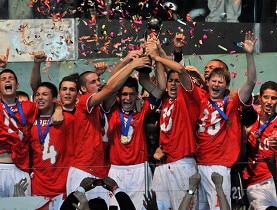 Switzerland's Under 17 squad has beaten Nigeria 1-0 in the final of the World Cup in the Nigerian capital Abuja. A day after the Swiss national ...

Xherdan Shaqiri, Granit Xhaka and Stephan Lichtsteiner will not be banned for their Albanian “double eagle” hand gesture.

2014 World Cup Swiss show off skills (and roots) in Brazil

Sport is not only a means of integrating foreigners into Swiss society – the country’s teams also benefit from immigration, according to Sports ...

The integration of teenagers with immigration background into Swiss society also depends on the country of origin of their parents, a poll finds.

Swiss coach Vladimir Petkovic has opted for continuity in his 23-man squad for the 2018 World Cup. But who's the only one to play for a Swiss team?

In November 2009, Switzerland’s Under-17 footballers were sensationally crowned world champions, attracting the attention of the big European clubs.