How do you help a country from which nearly a million people have fled, where the government is divided between civilians and soldiers, and where top people are accused of genocide? This is the task facing Christine Schraner Burgener of Switzerland.

She was appointed UN special envoy on Myanmar in April this year, and recently discussed her new role over coffee in Bern. She agreed to meet in the Einstein Café in the capital city’s picturesque old town. It is cold outside, and she says yes, she is feeling the changes in temperature, especially after all her recent travelling.

Schraner Burgener, 55, looks elegant in white, topped with a leather jacket. She is Swiss but grew up in Japan. She previously served as Swiss ambassador to Germany and Thailand, where she pioneered a diplomatic job-share with her husband, enabling them to both look after their two children. So she is Swiss and a little bit Asian, a champion of “female diplomacy”. She plays the violin and saxophone, she says. So maybe she is classic, with a little bit of jazz…

Now that the two children - a daughter of 22 and son of 19 - have grown up, she says she was ready to take this post. But it is an enormous challenge. Is this the biggest challenge she has faced so far? Each challenge is different, she explains:

Christine Schraner Burgener "This time it’s different because I’m in the spotlight..."

The new UN special envoy was appointed in the wake of an army crackdown in August 2017 against the Muslim Rohingya in Myanmar’s Rakhine state, after Rohingya militants attacked police posts. UN reports say the army, sometimes helped by local Buddhist militias, torched villages, committed mass killings, rape and sexual violence. Some 700,000 Rohingya people fled to neighbouring Bangladesh, where they now live in overcrowded refugee camps. A recent UN report external linksaid the country’s army chief and five other named top military officials should be prosecuted for genocide, crimes against humanity and war crimes.

Schraner Burgener’s mandate is wide, she tells us. It includes Rakhine, the return of the refugees, promoting democracy and human rights, and the wider peace process.  Myanmar also has longstanding ethnic conflicts in other states as well as Rakhine. But her priority, she says, is the nearly one million Rohingya in the refugee camps, who need “an immediate solution”. She says they must be allowed to return voluntarily with security and respect for their human rights, but she recognises that changing racist attitudes towards them in Myanmar could take generations.

In the meantime, she is trying to “build bridges”.  As a facilitator, she has to talk to everyone including the army, she says. She doesn’t believe in “megaphone diplomacy” or in closing doors.  She has already met with army officials and armed groups, and with State Councillor Aung San Suu Kyi, the Nobel peace prize winner whom many now see as a fallen idol for not having spoken out on the Rohingya crisis. But Schraner Burgener believes Suu Kyi still has a role to play. “She was 15 years under house arrest. I don’t believe that such a person would not continue to fight for democracy,” she says. “But her situation is really difficult, she is squeezed between the army and also the expectations of the international community. My personal attitude is we have to support her. It’s clear many were disappointed that she was not loud enough to say what happened is unacceptable. But we must also see that she has to work with the army, because they also have a veto right for each amendment of the constitution.”

UN special envoy to Myanmar "This country was 60 years isolated and under the army..."

Schraner Burgener has been to Rakhine and to the Rohingya refugee camps in Bangladesh. She describes what happened in Rakhine as “really, really terrible”, saying what is needed is “accountability and inclusive dialogue”. Asked what form accountability should take, she says that “fact finding is the first step and then the courts have to decide. What is important is that there is credible and transparent fact finding”.

"The government of Myanmar were against the mandate,  but when they met me the first time, the first thing they said was we accepted you because you are Swiss"

Myanmar has barred the UN’s special rapporteur on Myanmar, Yangee Lee external linkof South Korea, from visiting the country. But Schraner Burgener says all her travel requests within the country have so far been met. As a facilitator, does it help her to be Swiss? Here’s her answer:

Christine Schraner Burgener "We accepted you because you are Swiss"

Schraner Burgener believes that to be a successful facilitator, you also need to know the “mentality and culture”. For example, she says, people in Asia feel that being direct is a sign of arrogance.

“Honestly, behind closed doors I’m very critical of the Myanmar government, but I will never do megaphone diplomacy -- in my position that will not bring results. On the contrary, they will just close the doors.”

In order to continue to make progress, she says, she needs to convince the international community of her strategy of neutrality.

But she says she sometimes feels like a “punching bag”, including with member states in the UN. She has been travelling constantly, and only sees her family in Bern about four days per month. She has also been seeing and hearing some terrible things. This is how she copes:

Christine Schraner Burgener "I find energy from the interior"

Ultimately, Schraner Burgener says she wants to see results. “Even though I have a lot of patience, I also need to see actions,” she tells us. “If I don’t see enough actions in a certain period of time, then I will [reconsider] my mandate, that’s clear. Sometimes people think that I am too optimistic or too patient, but I also have my principles.”

The Swiss government has tightened sanctions against Myanmar because of human rights concerns.

The plight of Myanmar’s Rohingya community was the centre of attention in Geneva with allegations of “acts of genocide” against the Muslim minority.

The Swiss branch of Amnesty International has criticised a visit to Switzerland by a high-ranking delegation of Myanmar army officials to discuss ... 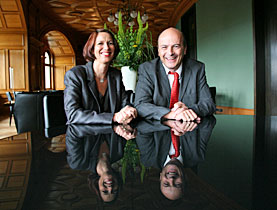 As a married couple, the new Mr and Mrs Ambassador to Thailand, Laos and Cambodia are breaking through a glass ceiling in Swiss diplomacy. ...

Prisons and migrants UN torture rapporteur on the millions at risk

What’s it like to be the UN ‘Special Rapporteur’ on torture?

Ending discrimination Gender equality: We may never fully succeed, but we still have to fight

We talk to expert Patricia Schulz about what has changed for women's rights and what still needs to change.

What’s it like to be a top trade negotiator in the age of Donald Trump and Brexit? We talk to Henri Gétaz, new head of EFTA.