Germany has a lot to learn from the Swiss about how to identify potential nuclear waste storage sites, Environment Minister Sigmar Gabriel admitted on Wednesday.

He was speaking to journalists after his Swiss counterpart, Moritz Leuenberger, addressed members of the German parliament's environment commission about Switzerland's attempts to find an acceptable depot for its nuclear waste.

"Switzerland is not trying to rush into this", Gabriel said, "The focus has been first and foremost the safety and security of a possible storage site for nuclear waste, and this has been followed with an open and transparent approach."

Leuenberger explained why he thought his German counterpart found the Swiss model so attractive.

"We have a model of full participation," he told swissinfo.ch, explaining that the Swiss system allows for maximum transparency.

Leuenberger described the search process for a storage site as "an exemplary model of evaluation in a basic, democratic way".

Leuenberger's meeting with the German parliamentarians came at a time when Europe is experiencing a nuclear renaissance, after several decades when nuclear power was the target of fierce criticism, largely from environmental campaigners.

A number of new factors have emerged which make emissions-free nuclear power appear more attractive. Oil prices have risen, more problems have arisen over the security of energy supplies, and climate change has climbed higher up the international agenda.

But how best to dispose of the waste remains a key issue.

This is where Switzerland has done so well, according to Gabriel. He particularly praised the fact that the Swiss have had the foresight to initially identify six possible deep-storage sites for their radioactive waste, instead of just focusing on one as Germany did.

Leuenberger agreed that progress could only be made by keeping all options open and with all parties on board.

He admitted that mistakes had been made in the past in Switzerland too when people's questions about alternatives and criteria used for reaching a decision had been ignored. As a result, local voters had rejected the original plan to create a waste storage site at Wellenberg, in the centre of the country.

Switzerland is now considering six possible sites, and any decision will be taken in careful consultation with local people in a clearly defined process which will stretch over some ten years.

Since at least two of the sites are close to the German border, the Germans will have "exactly the same rights as the Swiss" when it comes to participating in the decision-making process, Leuenberger said.

For its part, Germany has been trying for years to find a suitable solution for the permanent storage of nuclear waste and spent-fuel elements. Last September it was reported that a temporary storage site in the Asse mountain range in Lower Saxony was leaking, causing its security to deteriorate rapidly.

That facility has subsequently been shut down, but the public outrage that gripped the country at the time brought the issue of nuclear waste back to the forefront

Another site in Gorleben, also in Lower Saxony, has for decades been regarded as a potential permanent site for highly radioactive waste, but progress here has been stalled because of political differences and protests surrounding nuclear waste dumping.

Leuenberger drew a clear contrast between Germany and Switzerland.

"Here in Germany they are fixed on one point and the opposition is very strong and they have no strong arguments for this one site.

"That's why our model where we look over all Switzerland and evaluate several different locations and then over a long process decide which of all these locations is the best is the only way forward in a true democracy."

He pointed out that in the Swiss system of direct democracy the people will be asked to vote on the issue, and the vote can only be won through strong arguments.

In Germany's system of representative democracy, it will be up to parliament to take the relevant decision. Gabriel said he hoped that the next parliament would manage to find a transparent, country-wide procedure to clarify the search for a storage site.

Although the country still has a long way to go, Leuenberger said he was sure it was on the right path.

They account for around 39% of the country's electricity production.

Switzerland sent spent fuel rods to reprocessing plants in Britain and France until July 2006, when a ten-year moratorium came into force.

Under Swiss law, radioactive waste must in principle be stored within the country at the expense of the producers.

Since 2001 high-level radioactive waste has been stored in an interim facility in northern Switzerland, known as Zwilag.

In 2002 voters in canton Nidwalden threw out a plan to build a permanent underground nuclear waste repository in their region.

Six potential storage sites in northern and central Switzerland are currently under consideration, including the one in Nidwalden.

Storage will be 400-900 metres below the surface, in suitable rock formations.

The aim is to ensure the safe storage of radioactive material for up to one million years.

The consultation process is scheduled to take ten years from 2008.

The cabinet expects to make an initial selection in 2011 and take a final decision in 2016-19. This will have to be approved by parliament, and may be the subject of a referendum.

The selected sites should come into operation in 2030-40.

During his visit to Berlin, Environment Minister Moritz Leuenberger signed Switzerland up as a member of the International Renewable Energy Agency (IRENA).

IRENA was set up in January 2009 to promote renewable energy worldwide.

It now has 83 members from both industrialised and developing countries.

Switzerland hopes membership will enable its enterprises to benefit from technology and know-how transfer, and to take an active role in the international market for renewable energies.

Parliament has to ratify the agreement. 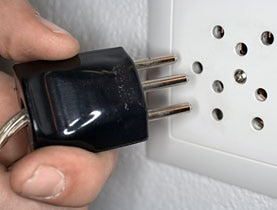 The Swiss are a nation of energy guzzlers – figures show that electricity consumption grew to its highest level ever in 2008. The government is ... 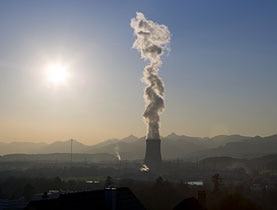 Atomic energy unpopular despite widespread use

Nuclear energy provides Switzerland with 40 per cent of its power but more than half of the public oppose the technology to some degree, a survey ...

The Federal Energy Office has presented a first list of possible underground repositories for nuclear waste - mainly in northern Switzerland. The ...

Three-hundred metres below ground, researchers from Switzerland, other European countries and Japan are studying the properties of Opalinus Clay, ...