A soldier has confessed to the killing of a 16-year-old girl last Friday in Zurich in what appeared to be a random shooting.

The incident comes amid a heated debate over Switzerland's gun laws. Army issue weapons are involved in the death of more than 300 people a year in the country.

The Zurich prosecutor's office said on Tuesday that the 21-year-old soldier, who was arrested two days after the shooting, admitted to committing the crime.

The authorities have not yet released any details about a possible motive. They did say that there was no reason to believe the gunman knew the victim.

The 16-year-old was waiting at a bus stop along with her boyfriend when she was shot. The soldier had completed his recruitment training only hours before the incident.

The shooting gives additional ammunition to groups who want to see tighter gun laws. In September, parliament banned the long-standing tradition of allowing all enlisted men to keep their ammunition at home.

Also hotly debated is a people's initiative launched the same month by the centre-left Social Democratic Party and pacifist organisations to go a step further and ban the estimated one-and-a-half million guns and rifles kept at home.

The initiative includes a call for army weapons to remain in the barracks and a national gun register. The anti-gun proponents argue that the practice is no longer necessary from a military point of view.

But speakers from the rightwing Swiss People's Party and the centre-right Radical Party say the decommissioning weakens Swiss security and is a vote of no confidence in soldiers.

Defence Minister Samuel Schmid – a member of the People's Party – said he was shocked by the latest killing and offered his condolences to the family and friends of the victim.

However a defence ministry spokesman said that Schmid refused to comment on whether the latest incident would have an impact on the gun law debate.

For her part, Foreign Minister Micheline Calmy-Rey of the Social Democrats said the shooting was inacceptable and called into question the current practice.

Only two weeks ago, a lone gunman used his military assault rifle to fire on a dozen fellow worshippers at an Islamic centre near Lausanne, seriously injuring one.

All able-bodied Swiss men aged 20-30 are conscripted for about three months and issued with a rifle.

After initial training, they are required to do three or four weeks of army service a year until they have served a total of 260 days or reached the age of 34. Throughout this time they keep their rifles and 50 rounds of ammunition at home.

Five years ago Switzerland was stunned when a gunman shot and killed 14 people in Zug's cantonal parliament with a rifle, before turning the gun on himself.

Debate on the use of firearms was further fuelled in April last year when the husband of former women's ski champion Corinne Rey-Bellet killed his wife and her brother with his army pistol.

Debate on the use of firearms was fuelled in April 2006 when the husband of a former women's ski champion, Corinne Rey-Bellet, killed his wife and her brother with his army pistol.

In June 2006 the Senate came out in favour of slightly stricter rules for purchasing and keeping firearms but a significant tightening of the law was not on the table.

The reform of the gun law aims to bring regulations in line with the EU's open border policy, which Switzerland will be joining in the near future.

The head psychiatrist with the Swiss army has previously called for psychological tests for militia army members to reduce the risk of gun attacks.

Estimations of the number of firearms in circulation in Switzerland range upwards from 1.2 million.
Army-issue weapons are said to be involved in the deaths of more than 300 people in Switzerland every year.
According to Ipsilon Suicide Prevention, 34% of suicides among men are due to firearms, compared with only 3.7% of female suicides.
In April 2007 a survey found that 65.6% of citizens would vote to ban army weapons from the home, 69% were in favour of a national gun register and 37% said a ban on storing army weapons would prevent family tragedies. 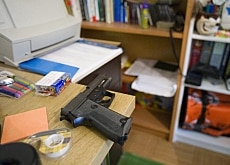 More than 300 people are killed every year by army guns, according to a study led by the Swiss criminologist Martin Killias. These weapons play a ...

A women's magazine has collected 17,400 signatures in a bid to rid Swiss households of hundreds of thousands of weapons. The petition comes amid ...