A day before he finishes up his mandate at the United Nations, veteran Swiss diplomat Jean Ziegler has expressed harsh criticism of the policies of Foreign Minister Ignazio Cassis.

To mark the end of his mandate on the UN’s Human Rights Council advisory committee, the 85-year-old gave an interview to journalists in Geneva during which he criticized both Swiss and European policy on various rights issues.

On the former, the decision to follow US sanctions placed on Caracas has meant that Venezuelan diplomats in Switzerland have been effectively blocked from accessing bank accounts, he said. This violates Swiss obligations as a host nation to UN missions, thereby weakening the position of International Geneva, Ziegler said.

On the matter of Palestine, the former sociology professor disapproved of Cassis’ position towards the UN Palestinian Relief and Works Agency (UNRWA).

In May this year, Cassis said that UNRWA had become part of the problem by maintaining refugee camps, rather than trying to integrate refugees into other countries; Switzerland also suspended its funding to the agency amid claims of misconduct by top management.

For Ziegler, this was a “catastrophic” reaction. He defended the embattled Swiss head of the UNRWA, Pierre Krähenbühl, and said that the investigation launched was “unfounded”.

In general, Ziegler said, foreign policy under Cassis was “mercantilist” and based more on supporting development to areas that could provide economic benefit to Switzerland rather than on foundational values.

The Bern-born social democrat is no stranger to controversial statements or positions, and his re-appointment to the UN in 2013 was disputed by critics – including by erstwhile US Ambassador Samantha Power – who accused him of close ties to former Libyan dictator Muammar Gaddafi.

Ziegler said the criticisms amounted to a campaign of defamation against him and an attempt to discredit the UN Human Rights Council.

His next move will be to publish a book based on his recent trips to migrant camps in Greece, where he witnessed “horrible” conditions reminiscent of “concentration camps”. The book will be titled “Europe’s Shame” and will be released in the coming months. 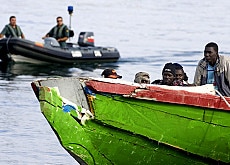 The United Nations Special Rapporteur on the Right to Food has urged industrialised countries to grant so-called "refugees from hunger" a ...