The completion of a new rail link through the Swiss Alps will not significantly reduce the amount of freight transported by road, an environmental group has warned.

That was the key finding of a study into the likely impact of the 57-kilometre-long Gotthard Base Tunnel, carried out for the organisation Alpine Initiative.

The tunnel, which will be the longest in the world when it opens in 2017, will only increase rail's share of freight haulage from its current 62 per cent to 64.5 per cent, the group said.

The Gotthard is the major conduit for people and goods travelling Switzerland's north-south axis.

The new tunnel is set to increase freight capacity and offer better connections to trains but according to the Alpine Initiative's own calculations, it will do little to decrease the cost-per-kilometre of shipping by rail. The longer the journey, the more negligible the savings become.

The lobby group says extra financial disincentives must be introduced to keep cargo off trucks.

It used the findings to push again for the introduction of a so-called Alpine Crossing Exchange. This would include a quota on trans-alpine freight and a system allowing haulage companies to purchase credits for their journeys.

"We do not need to negotiate with the transport industry but with politicians to set out a framework," Arnold told swissinfo.ch after a news conference on Thursday.

The national road hauliers association, Astag, said the results of the study "contain no new insights". It argues that financial disincentives are the wrong way to reduce the number of trucks on the road.

"The demands for even more tariffs and coercive penalties against road transport are old illusions," Astag said in a written statement. The group wants a "reorientation" of transport policy to introduce competition into the rail cargo sector.

The Alpine Initiative says that the new Gotthard tunnel will increase freight capacity and offer better connections. Astag has called the project a utopian endeavour that will gobble millions of francs.

Switzerland already has the densest rail coverage in Europe, the group adds.

In 1994, Alpine Initiative's efforts to protect the mountain environment from increasing road traffic and to transfer trans-alpine freight from road to rail ended with a surprising win at the ballot box.

Up to the end of 2000, trucks exceeding 28 tons were banned from Swiss roads. That changed in January 2001, when the limit was increased to 34 tons.

The Alpine Initiative has led calls to reduce the number of trucks passing through the Swiss Alps from its current 1.3 million per year to 650,000 by 2018-2019. It's a goal that Astag calls unrealistic.

Amid the ongoing debate, Switzerland is the envy of its neighbours.

About two million trucks crossed Austria's Brenner Pass alone last year, which was an increase of more than five per cent from 2006.

The Alpine Initiative group was founded in 1987 and claims to have about 50,000 members and supporters.

It aims to protect the alpine environment from increasing road traffic.

The group forced a nationwide vote on the issue, which was approved by the Swiss voters in 1994.

As a result, parliament and the government decided to introduce fees for heavy-goods vehicles, increasing the maximum weight of trucks from 28-40 tons and subsidising tickets for trucks which use rail transport.

The group also helped defeat a proposal in 2004 to build a second road tunnel through the Gotthard in central Switzerland.

Swiss transport policy calls for most goods transport to be taken off the road and put on trains.

Presently about 1.3 million trucks per year pass through the Swiss Alps.

The Gotthard is on the main north-south artery through Switzerland. There are two other routes: through the Lötschberg-Simplon tunnels in the west of the country as well as the San Bernardino in eastern Switzerland. 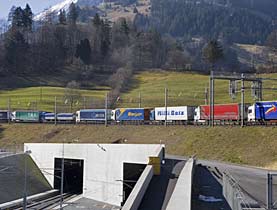 The government is being accused of dragging its feet on implementing a key environmental goal to reduce the amount of freight crossing the Swiss ... 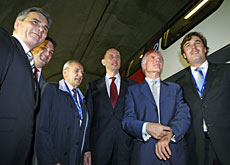 Europe lags in transfer of freight onto rail

The new Lötschberg rail tunnel under the Alps, which was officially opened on Friday, should have a huge impact on the transfer of freight from ... 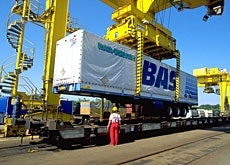 Getting cargo through the alpine bottleneck

For years, Switzerland has been trying to convince transport firms to move cargo off trucks onto the railways as alpine passages reach saturation.

The old Gotthard railway line offers a feast for the traveller's eyes.