A group of non-governmental organisations has called for tougher gun laws, pointing out that firearms are responsible for one suicide a day in Switzerland.

The NGOs, representing branches of psychiatry, violence prevention and human rights, said on Thursday that the introduction of a central arms database would avoid much pain and grief.


They pointed out that Switzerland's suicide rate at just under 1,500 a year was high compared with other countries.

The president of the Swiss Society of Psychiatry and Psychotherapy, Hans Kurt, noted that there were more suicides in the country than the combined number of deaths from car accidents, drug abuse and Aids.

Disappointed by the Senate's failure to significantly tighten existing gun laws when it debated the issue last month, the NGOs called on parliament's other chamber, the House of Representatives, to do more to combat the misuse of firearms.

Kurt said the easy availability of weapons increased the risk of suicide and murder since suicides resulted mainly from rash decisions taken in the heat of the moment.

Switzerland has an arms tradition, with soldiers of the country's militia army allowed to keep their weapons at home. And shooting is a popular sport, with more than 150,000 active members of rifle clubs.

Kurt said that army weapons played a role in so far as they were at hand in most Swiss households and accounted for almost a half of all suicides carried out with firearms.

An official of the Victims of Violence Forum, Liz Isler, felt one of the main prevention measures ought to be legal controls on accessibility to firearms and the authorisation to use them.

She said access had to be severely restricted and registration of weapon owners and weapons had to be made compulsory.

A member of the government of canton Zug, Hanspeter Uster, also spoke out in favour of a central database, arguing that police might have been able to prevent a massacre that took place in the cantonal parliament in 2001 when a lone gunman shot 14 people.

The Swiss branch of Amnesty International said it was concerned that none of its recommendations on tightening the law had been supported by the Senate.

The Senate was accused of approving only a minimum of alterations to bring Swiss law into line with the European Union, including widening the list of objects that can be considered "weapons" such as baseball bats, soft air guns and bicycle chains.

Amnesty called on the House to correct the "mistakes" of the Senate, arguing that it had a duty to protect human rights and ensure the safety of the population.

According to a people's initiative on the prevention of suicide, the current revision of the law on weapons was a step in the right direction but not enough if Switzerland wanted to make real progress in suicide prevention.

There are about two million firearms in circulation in Switzerland.

The number of suicides is close on 1,500 a year. Suicide accounts for more deaths than car accidents, drugs and Aids together.

Among those demanding tighter laws are Amnesty International, the Swiss Peace Council, the Victims of Violence Forum, the Stop Suicide Association, Ipsilon (the Initiative for the Prevention of Suicide in Switzerland) and the Swiss Society of Psychiatry and Psychotherapy.

Debate on the use of firearms was fuelled in April when the husband of a former women's ski champion, Corinne Rey Bellet, killed his wife and her brother with his army pistol.

Amnesty International believes that the availability of guns should be restricted, arguing that the fact they are kept in the home is a permanent risk and could be a contributing factor for suicides and murders. 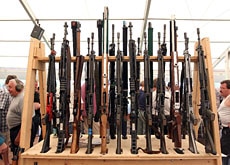 The Swiss Senate has come out in favour of slightly stricter rules for purchasing and keeping firearms, but a significant tightening of the law ...

Why is Switzerland prone to family killings?

The brutal murders of Swiss skier Corinne Rey-Bellet and her brother have once again cast the spotlight on family killings in Switzerland. ...

The Swiss government on Wednesday recommended to parliament that all gun owners must obtain a permit. Bowing to resistance from lobby groups, the ...