Internationally renowned Swiss cartoonist Patrick Chappatte says the only way to respond to the bloody attack on Charlie Hebdo is to continue working. However, he fears that projects in conflict zones – using drawings as dialogue – will now be more difficult.

In an interview with the Swiss News Agency, Chappatte, who lives in Los Angeles, says Wednesday’s attack on the Paris office of the satirical magazine, in which 12 people were killed including most of the magazine’s editorial staff, is not just an attack against the magazine but equally “an attack inside our heads”.

Swiss News Agency: Will you be able to continue working as you have been up to now, after the events in Paris?

Patrick Chappatte: To process this tragedy the only way to react is to continue to draw. Humour shouldn’t die because the bringers of humour are dead. A society that does not laugh is a society that does not breathe. A shadow had been hanging over Charlie Hebdo since the affair of the Mohammed cartoons [in 2006]. On Wednesday we saw this take the form of blood …

SNA: One of your drawings also caused problems for someone who displayed it at a recent demonstration in Turkey.

P.C.: Yes, he was questioned by policeexternal link. It’s the first time that I’ve heard that one of my drawings caused problems for someone.

SNA: There has been a powerful wave of solidarity with the editors of Charlie Hebdo, but here and there, more discreetly, the attack on the Paris publication has also been welcomed.

P.C.: You will always find that kind of reaction but I’m sure that the majority of people are shocked. This is because the attack was not only targeting the editorial department of Charlie Hebdo, cartoonists or journalists, it is also an attack in our heads, against the readers, against those who think, who criticise, who laugh, against all sensible people …

SNA: Is what is at stake the possibility to breathe in a society?

P.C.: Yes, and that is what is destablising about what has just happened. The people who were mown down by those bullets were at the cutting edge of what can be done in the comic press, at the cutting edge of freedom of expression. That is the point of satirical newspapers. Moderate people can express themselves in a society only because people like Wolinksi or Cabu [two of the murdered cartoonists] keep the perimeter wide enough.

SNA: What will happen now?

P.C.: It will first be necessary to stand firm against any attempts for political or religious gain from all sides. I do not want to be the hero of Marine Le Pen [leader of the far-right National Front]. Or that this issue is used as a pretext for a new debate again about re-introducing the death penalty [Le Pen floated the idea on Thursday].

SNA: Are you going to continue to explain your job to journalists in conflict countries?

P.C.: For the past ten years, after the affair of the Mohammed cartoons, I have been working on projects such as plumes-croisees.comexternal link [which uses drawings as a means of dialogue], which is supported by the Swiss foreign ministry. I have visited Ivory Coast and Guatemala with the idea of making cartoonists from rival camps work together. What’s at stake in this project is the defence of freedom of expression, but also the understanding of the world.

SNA: Has the world become smaller since Wednesday?

P.C.: Smaller, and also more cramped. In 2009 I went to Gaza to work on a cartoon reportage. It will be even more difficult to carry out this kind of project in the future.

Patrick Chappatte was born in 1967 in Pakistan to a Lebanese mother and a Swiss father.

He spent his first five years in Singapore before his family moved back to Geneva where he attended school.

He got his first job as a cartoonist aged 20 with La Suisse, a Geneva newspaper that has since folded. He later worked for L’Hebdo magazine and the Tribune de Genève daily.

In 1995, he started working as an illustrator for the NewYork Times and for a short time as a cartoonist for Newsweek International.

By 1997, he began drawing  for the German-language Weltwoche magazine, and in 1998 returned to Switzerland where he worked again for L’Hebdo before joining Geneva’s Le Temps newspaper.

Since 2001, his cartoons have appeared twice a week in the International New York Times, and since 2002 in the NZZ am Sonntag.

In 2012, he became the first non-American to be awarded the Thomas Nast Prize, considered the most prestigious after the Pulitzers, since its creation over 40 years ago by the Overseas Press Club of America.


(Translated from French by Clare O’Dea), swissinfo.ch and agencies

Controversial cartoons "No topic is unworthy of caricature"

For caricature there are no taboos and even sensitive topics are admissible, according to Anette Gehrig, director of the Basel Cartoon Museum. On ...

Swiss cartoonist Patrick Chappatte is the first non-American to be awarded the Thomas Nast Prize since its creation over 40 years ago by the ...

Illustrators Patrick Chappatte and Jeff Danziger talk to swissinfo about the death penalty and their own 9/11 – the 2005 Mohammed cartoon controversy. 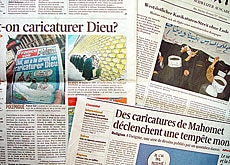 Swiss cartoonist Chappatte gives swissinfo his take on the controversy surrounding the publication of Mohammed cartoons in a Danish newspaper. ...