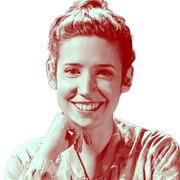 Gülsha Adilji is a Swiss television moderator and writer, born in 1985. She has worked with the youth channel Joiz TV and in 2012 was named Swiss journalist of the year. Today she concentrates full-time on telling stories, and is part of the writing group Atelieer.

As a woman today, society gives you three options: (a) hate your body, (b) hate your face, or (c) hate your personality. I honestly don’t know how I ever managed to develop any self-confidence, or even how I managed to go about my daily life, because for me the answer was usually (d) all of the above.

But at some point you grow up, you find yourself, you stop crying about cellulite, you decide that olive oil isn’t toxic anymore, rather that it’s the best way of stuffing carbs into yourself. Carbs become something you eat, as opposed to Public Enemy Number One or the only thing standing in the way of acquiring a perfect Instagram body. You’ve realised that this body belongs to some other woman, and that it’s not your only possibility of ever reaching happiness. Period.

But there’s still so much that has to be done so that it’s not only some women – and not only after the age of 30 – who reach this stage. We need to seriously work on our society so that the next generation doesn’t have to suck their stomachs in to walk through the world. They can use their energy to change the structures of power. The world today is still pretty crap for girls and young women.

Even within my circle of woke friends, things still need to change. My flatmate is a self-professed feminist. But when I ask him politely to close the window because I’m too cold, or to turn down the music because I’m not in the mood for loud electro, he sometimes rolls his eyes. Or he breathes out through his nostrils and mumbles into his sweater, “you always find something to moan about”.

This happens incredibly often: when I have an opinion about something, or when I’d like to change something, I’m understood as complaining – not as someone to be taken seriously. At times I’ve wondered if I’ve turned into an old fogey, someone who can’t hang out with young people anymore, who can’t handle how loud and crazy they are: I question myself. But then I say to myself “Nooo girl, you’ve learned to handle the bingo wings and stretch marks, and now nobody is going to make you believe you’re not a chilled-out person!”

If I’d said this out loud, I probably would have found myself launching into some energetic dance at the same time. When I say something, I’m not whinging – I’m just saying something. End of story. I’m not nagging when I ask my flatmate to wash up his stuff – I’m just saying it. My flatmate serves here as a metaphor for society, which loves to make women into a problem. By “having a moan”, I become the problem, not the dirty dishes. When women express an opinion, we are suddenly “bossy”. When we question something, we are “nagging”, and when we get upset about something, we are hysterical drama queens.

Gülsha Adilji is a Swiss television moderator and writer, born in 1985. She has worked with the youth channel Joiz TV and in 2012 was named Swiss journalist of the year. Today she concentrates full-time on telling stories, and is part of the writing group Atelieer.

The article above was written to accompany a SWI swissinfo.ch-organised online panel which took place on March 4 as part of the 13th Aarau Democracy Days festival. This year the theme focused on women in politics.

This is all so deeply ingrained that it’s a weird experience to actually pay attention to how often things are framed this way. If I drank a shot every time I heard the words “stop complaining”, I wouldn’t be alive much longer.

All my feminist friends love to laugh and complain about gender inclusive language: they come up with sentences to show how it gets in the way of the flow of reading, how we shouldn’t get so carried away by it. That’s the point. We should : women make up 50% of the population, and we don’t want to be simply “implied” to in speech.

Why do I even still need to explain this? In any case the human brain is is completely capable of assimilating these new forms and reading them fluently. In the previous sentence, for example, your brain automatically ignored the second “is”. A few inclusive linguistic forms aren’t going to disrupt things. 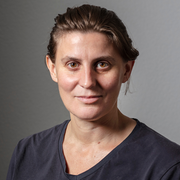 Do you think gender-neutral language can promote more gender diversity?

Gender-neutral language is a way to change patriarchal norms. School texts books, news stories and editors are now increasingly taking this into...

For all those who feel overwhelmed by the thought of using a more inclusive language, my life hack is this: women have enough on their plate, from domestic violence to sexual assault, rape, and people telling us to smile more. It’s not too much to just keep your mouth shut and start using the small symbols of a gender-equal language. Yes, women do now have positive examples to look up to: Alexandra Ocasio-Cortez, Greta Thunberg, Luisa Neubauer, Lisa Christ. But that’s the 0.0001%. The other 49% is missing. 51%, in fact.

Women in Swiss politics: still a long way to go

This content was published on Feb 3, 2021 Feb 3, 2021 Fifty years after getting the right to vote, women are better represented in the Swiss parliament than ever. But this is deceptive.

Trying to overturn the patriarchy is incredibly difficult: breaking up all those structures which others are trying desperately to preserve, as if they were loose batteries lying around that might someday be useful again. But they don’t work anymore; they’re bad for the environment, and they belong in the bin. And we shouldn’t make the mistake of handing this job off to the young “feisty” women – the rebels like AOC or Greta, fighting at the front. It’s not the job of the next generation. We can’t sit back and pass the challenge over to them – we all have to work at it together.

0.0001% can’t do the job for 100%. Together, we have to shovel away the rotten remainders of the patriarchy, so that ten years from now Generation Z isn’t burned out – they already have the climate to take care of, that’s enough. We can’t add more to their burden. All of us have to take responsibility, and this means starting small.

So here’s my suggestion; you’ll know if it’s aimed at you. Start using a more inclusive language, and in future when you want to use the words “moan” or “nag”, just wash your dishes instead, or turn down the music. This might even help you get over some of your own self-doubts.

*In the original German, this article refers several times to an emerging use of language that avoids generic masculine nouns when referring to groups which include both men and women. For example, while in German the word “doctors” is usually “Ärtzte”, the suggested form would be “Ärzt*innen”, a plural form that includes both genders.

This content was published on Jul 21, 2022 Jul 21, 2022 Switzerland helped negotiate an international treaty to eliminate nuclear weapons, so why hasn't it signed or ratified it?