India is one of the biggest emitters of carbon dioxide in the world. At the same time, rural and isolated communities in the country are hit hard by climate change. Swiss aid is being used to try to tackle these two interlinking issues.

In his inaugural speech as India’s environment minister, Prakash Javadekar laid out the new government’s strategy when it comes to the environment. “We believe that growth and environment protection is possible. After all, poverty is the biggest impediment for environment.”

The message is remarkably similar to the one given by former Indian Prime Minister Indira Gandhi at the United Nations’ first global conference on the human environment in Stockholm in 1972.

“We do not wish to impoverish the environment any further and yet we cannot for a moment forget the grim poverty of large numbers of people. Are not poverty and need the greatest polluters,” she asked.

However, a lot of things have changed since 1972. For starters, India is not among the poorest countries in the world anymore. According to World Bank figures, Gross National Income has increased almost tenfold, from $130 (CHF 120) in 1972 to $1290 (CHF 1185) in 2010. During the same period, India’s per capita carbon dioxide emissions have increased more than fourfold, from 0.4 tonnes in 1972 to 1.7 tonnes in 2010. It is now the third-largest emitter of carbon dioxide in the world.

India’s stance against taking responsibility for reducing its carbon footprint has also softened in recent years. At the Copenhagen Summit in 2009, India committed that by 2020 it would reduce its emissions per unit of GDP (energy intensity) by 20 to 25 per cent from 2005 levels. The current government has also made the symbolic move of renaming the Ministry of Environment and Forests as the Ministry of Environment, Forests and Climate Change.

This combination of vulnerability and increasing prosperity puts India in a unique position for the Swiss Agency for Development Cooperation (SDC) which provides taxpayer-funded development aid to the poorest countries.

India is not a priority country for the SDC as it is comparatively well off compared with the least developed countries. However, its increasing share of global greenhouse gas emissions along with its vulnerability to the impacts of climate change cannot be ignored either.

“One of the main principles when it comes to choosing a country to work with under the SDC’s Global Programme Climate Change is identifying where we can achieve the greatest impact. Emerging countries like India and China are one of the biggest greenhouse gas emitters and are also important players in climate change negotiations, ensuring a greater impact for us when compared to low income countries,” Janine Kuriger, head of the SDC Office in New Delhi, told swissinfo.ch at the SDC’s Annual Conference in Geneva, where climate change impact on India was the subject of a panel discussion.

Switzerland placed third in a global rankingexternal link on readiness to meet the threat of climate change while India only managed 120th place. However, India has potential to improve in this area with the transfer of Swiss know-how.

According to Kuriger, both the Alps and Himalayas face similar challenges due to climate change. In both regions temperatures are predicted to increase, rainfall patterns are expected to change and the frequency of natural hazards like glacial lake outburst and flooding are likely to increase.

Therefore, adapting to climate change in the Himalayas is one of the areas where Switzerland is helping India. The Indian Himalayas Climate Adaptation Programme (IHCAP) promotes collaboration between Swiss and Indian scientists on glaciology in order to better monitor glacier retreat.

“We have been directly approached by the Indian government to train researchers in glaciology because there are not enough specialists in the country to monitor glacial retreat,” said Kuriger.

Climate-related disaster preparedness is another vulnerable area for India. In June 2013, around 5,700 people lost their lives due to devastating floods in the Himalayan mountain state of Uttarakhand. The floods were caused by 400% increase in rainfall over two days along with a high amount of water released by glacial lake outbursts.

Lack of a clear disaster preparedness and management strategy was partly to blame for the huge loss of lives in the floods. Inadequate information, awareness and preparedness turned the hazard into a disaster according to a report by the National Institute of Disaster Management.

Risk management in mountain zones is one of Switzerland’s strengths that can be adapted to the Himalayan environment. “The three-pronged Swiss risk management approach of prevention, preparedness and response can be transferred to the Indian scenario and help communities respond to extreme events. If we look at the disaster that happened last year in Uttarakhand, better risk analysis and timely interventions can save a lot of lives,” said Kuriger.

Besides the Himalayas, the SDC is also helping India tackle the problem of too little water, particularly in semi-arid parts of the country that depend on rain-fed agriculture. Increasing temperatures and changes in the rainfall patterns will further exacerbate water scarcity problem in these regions. This involves encouraging local farmers to adopt an adaptive sustainable agriculture strategy that involves water budgeting, water harvesting and changing cropping patterns.

One of the biggest challenges for the SDC in India has been to convince rural communities to give up certain traditional practices and adopt new techniques that will help them adapt better to a changing climate. A proper understanding of the risks and a clear financial incentive can help change attitudes, the SDC says.

“It is important that people are well informed about the change and convinced that they will be better off economically if they adapt,” Kuriger argues.

Annette Etienne of NGO Freres de Nos Freres, which is working on an SDC-funded project in Orissa, is convinced that success breeds success. “When neighbouring villages see the progress made, they want the same for themselves,” she told swissinfo.ch.

“Women, especially young women are very eager to learn and adopt new technologies if it can provide them with revenue. They are good entrepreneurs,” says Josiane Tallon of Les Amis du Tibet that is working on two SDC funded projects in the Himalayas.

Another challenge is speeding up the implementation of India’s National Action Plan on Climate Change across the country.

“We want to assist the States in implementing the State Action Plans on Climate Change as it is important for us to go beyond planning and make a real difference on the ground,” said Kuriger.

Perhaps the SDC could benefit from the formula developed by one of its projects. Philippe de Rougemont of NGO Noé21, that is working on an SDC-funded project on green buildings in several Indian cities, claims to have found the recipe for success in India.

“We pursue a bottom-up approach by creating local success stories that will then hopefully inspire the government to replicate it on a larger scale and introduce relevant laws,” he told swissinfo.ch.

Financing climate change adaptation on a landscape and sectoral scale is a big challenge for India. According to country’s Climate Change Finance Unit, current government expenditure on adaptation to climate variability exceeds 2.6% of the GDP, with agriculture, water resources, health and sanitation, forests, coastal zone infrastructure and extreme events, being specific areas of concern.

While Janine Kuriger of SDC agrees that it is important that international finance mechanisms like the Green Climate Fund are established, she also states that these initiatives will never be enough to address the challenges ahead.

Perhaps the private sector can fill the gap. From April 1, India became the first country to mandate a minimum spending on corporate social responsibility (CSR). Indian and foreign companies based in India that meet a certain turnover threshold are obliged to contribute two percent of their average net profits towards social development measures.

A sub-committee of the company’s board of directors will be responsible for framing a CSR policy and recommending activities to be implemented under this policy.

“It is a very good move from the government but we must be very careful that the funds are not just used for philanthropic reasons but have a strategic direction behind them. This finance stream has a lot of potential in terms of providing access to renewable energy as well as improving capacity for climate change adaptation,” said Kuriger.

Thanks to new monitoring techniques that improve flood forecasting, Switzerland is now less prone to the catastrophic type of flooding that has ... 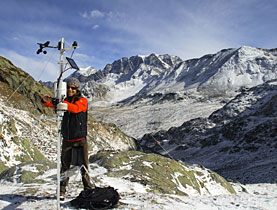 Swiss scientists are working on a new way to better predict floods, landslides and avalanches – among the most feared consequences of climate ...