Swiss tennis star, Martina Hingis, who once reigned as the youngest women’s No. 1 player, has called time on a successful, sometimes controversial, career at the age of 37.

Aged 16, Hingis rose to the top of the Women's Tennis Association (WTA) rankings in 1997 having won Wimbledon, the US Open and the Australian Open that year. She was the WTA’s No. 1-ranked player for 209 weeks. But her prolific success as a singles player was cut short by injury in 2003, following two more successes in the Australian Open.

Her return to the tennis circuit was marred by controversy when she tested positive for cocaine in 2007 at Wimbledon. She maintained her innocence but retired immediately from the game, only to return as a champion doubles player six years later.

Born in the former Czechoslovakia, Hingis moved to Switzerland aged eight and soon made waves in the junior tennis ranks, coached by her mother. This early success immediately translated into stardom when she joined the WTA circuit. Only nine other women players have enjoyed greater success on the Grand Slam stage, having been WTA No. 1.

Speaking to swissinfo.ch in 2003 in the midst of her injury problems, Hingis said she did not have a career highlight. “I don’t have a best or worst memory. The first tournaments, the Grand Slams, winning and losing, all these moments were learning experiences,” she said.

“At the top level, there’s a fine line between exhilaration and success, and bitterness and defeat. But it was never a question of life and death and there were always other opportunities.”

In 2013, Hingis was inducted into the International Tennis Hall of Fameexternal link. 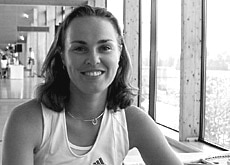 The Swiss tennis star, Martina Hingis, says it would take a “medical miracle” to get her back on the grand prix circuit. In February, a long-term ... 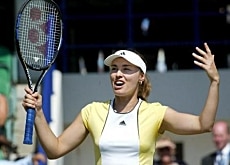 Hingis to return to professional tennis

The former world number one, Swiss tennis star Martina Hingis, has announced that she will return to the professional circuit in 2006. The ...

Elite list Tennis ace Hingis served up with another award

The exploits of Martina Hingis have been enshrined in stone as the Swiss former tennis star was inducted into the sport’s International Hall of ...

Patty Schnyder calls it a day