After the Indian Ocean tsunami on December 26, 2004, money was chasing reconstruction projects, says consultant Adriaan Ferf, who has been carrying out an evaluation of projects supported by Swiss Solidarity. His overall findings are still positive.

Ten years after the tsunami, Swiss Solidarity commissioned Channel Research, an independent consultancy in Belgium, to evaluate the long-term impact of 29 of its projects carried out in India, Indonesia and Sri Lanka.

Nearly 90% of the recipients of Swiss aid are now able to meet their own basic needs, the report says. All in all, 23,000 homes were built, which meant an improvement in the socio-economic conditions of the affected communities.

swissinfo.ch: The findings of your report are mainly positive and describe the benefits of projects supported by Swiss Solidarity for the populations affected by the tsunami. What can you tell us about what went wrong, and why?

Aid troubles Tsunami that changed an island and its people

Ten years ago this Christmas an earthquake devastated the coasts along the Indian Ocean. The islanders of Ko Phra Thong, in Thailand, were deluged with aid but the houses and schools built with Swiss money lie empty and in ruins.

Adriaan Ferf: I would like to emphasise that the problems encountered are really secondary, though they do exist. That said, the success or failure of a project is never determined by one factor or involved party, and depends a great deal on the situation.

Take the example of Meulaboh, a town in Indonesia that was hit hard by the tsunami. Swiss Solidarity funded reconstruction of a number of houses, near to those destroyed. Two years later, though, a flood swept away a large amount of shoreline, and today those homes are only 50 metres from the sea. So they are more exposed to the risk of flooding, high tides and salt erosion. Currently they are in a bad state, mostly vacant or else occupied by the very poorest people who cannot afford anything better. In this case the original location was preferred, but it turned out to be a problem.

swissinfo.ch: What factors determine the success or failure of a project?

A.F.: Among the many parties involved in humanitarian aid, local governments are assuming an increasingly important role in relation to international donors, and it is right that this should be so. The Swiss would not want the Netherlands to manage reconstruction of Switzerland after a natural disaster. So the idea is to help the central or regional governments assume this responsibility as best they can.

As I said, another crucial aspect is the location of the project. In Sri Lanka, for example, homes were built in a zone belonging to the government because people urgently needed somewhere to sleep. But these were remote and inaccessible, so no one wanted to go and live there. This was not a Swiss Solidarity project, but it illustrates the problem.

We also noted the importance of maintaining a social structure in the new settlements similar to what was there before. Mixing rich and poor, ethnic groups, locals and strangers can destroy the social cohesion of a community, putting its survival in danger.

swissinfo.ch: The international mobilisation following the tsunami was one of the largest in the history of humanitarian aid. How did people react when they were showered with this huge amount of money?

A.F.: Just after the tsunami, the situation got a bit absurd: there were more donors and money in circulation than needed, and that reduced the level of effectiveness. Also, if there are 50 organisations operating in the same area, coordination becomes so much more difficult. In this sense the tsunami was an exceptional event.

It must also be appreciated that people lost everything, or just about, in the tsunami. They had been very poor before, and all of a sudden things were within reach that they had never dreamed of – obviously, they started to want them. There was so much money around that everyone wanted a little piece of the pie.

But things have changed a lot. When I went back to those villages in Indonesia, India and Sri Lanka, no one was asking me for help or money.

swissinfo.ch: This extraordinary show of solidarity led to some problems: pressure to distribute the donations and demonstrate results quickly, competition among NGOs for the best projects in the best places, superfluous projects, corruption – how effective was the post-tsunami aid, really?

A.F.: The humanitarian aid sector is not organised as efficiently as it might be – that’s quite clear. There are 27 organisations under the aegis of the UN and an incredible number of bilateral donors and NGOs. It can be extremely difficult to manage a project together. But that is how the system works, and that is how people want it to work. The Swiss people want Swiss NGOs to be involved; the Dutch people want Dutch NGOs. When an NGO gets too big, people become leery of it.

We must also not forget that humanitarian aid is highly politicised. One of the five countries that have received the most aid for years now is Palestine. It is true that in Gaza people are living in difficult conditions, but the population there is a lot less than that of Somalia or the Democratic Republic of the Congo. In those two countries conditions are much worse.

swissinfo.ch: What lessons can be drawn about the appropriate response when natural disasters hit poor countries?

A.F.: The first lesson is that humanitarian aid is not a response to poverty. Humanitarian aid can’t lead to overall economic and social development of a country, and it can’t change the political system. If there is war or a repressive government before the tsunami, it’s still going to be there afterwards.

The second lesson is to remain modest. If you can do something in a poor country, go right ahead, but don’t expect too much. Remaining modest also means realising that something may be needed but you don’t have the means to do it.

Swiss Solidarity is a Geneva-based fundraising arm created by the Swiss Broadcasting Corporation – swissinfo.ch’s parent company – and other media.  The money collected by Swiss Solidarity is channelled to 25 partner organisations. These fund humanitarian aid and social projects in Switzerland and around the world.

Aid troubles Tsunami that changed an island and its people

Ten years ago this Christmas an earthquake devastated the coasts along the Indian Ocean. The islanders of Ko Phra Thong, in Thailand, were deluged ...

By Luigi Jorio, swissinfo.ch, with the collaboration of Natthaphol Wittayarungrote (editor of the English-language newspaper Phuket Gazette) 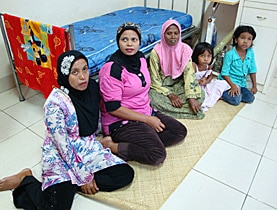 Nagan Raya is a brand-new 50-bed hospital in the Indonesian territory of Aceh, with state-of-the-art facilities and a noticeable shortage of patients.

The charity Swiss Solidarity has thanked the nation after it collected SFr227 million ($224 million) for its tsunami projects, which are now ... 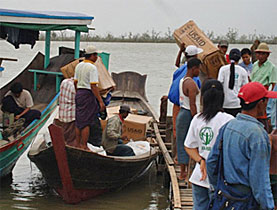 Competition among charities harms the cause

The trend for foreign aid organisations to target the Swiss donations market is putting pressure on local charities, a fundraising expert has warned.