Hoteliers in Zurich, famous for fastidious attention to detail, have been taking lessons in how to cater for Muslim guests during the holy month of Ramadan.

The numbers of Arab tourists to the city has doubled within four years and Ramadan falls in the peak month of August in 2009. Hotels are keen to please their fasting and free-spending guests.

Zurich Tourism got together with Muslim organisations in the city to arrange a series of workshops in May. High on the list of topics was catering for guests who do not eat or drink between sunrise and sunset and require specially prepared meals.

Hassan Abo Youssef, vice-president of the Zurich Association of Islamic Organisations, told swissinfo.ch that Zurich hotels have been on a steep learning curve.

"Hotel directors have to be informed about the times people are fasting, when people are eating and what they are eating," he said. "They learn that these guests take their breakfast at sunset and another meal before dawn."

Dietary requirements do not end at when Muslim visitors are allowed to eat. Islamic law also prescribes what food is permissible (Halal), which excludes the flesh of carnivorous or omnivorous animals and those that are not slaughtered in the correct way.

Zurich Tourism has drawn up a list of hotels that are prepared to meet these culinary requirements and offer other Ramadan-friendly services. These include: providing the addresses of city mosques, prayer mats and rooms in hotels, and Arabic newspapers.

Spokesman Maurus Lauber said the numbers of overnight stays by visitors from Arabic countries had risen from 30,000 to 62,000 in the past four years. Such tourists have been flocking to French-speaking Geneva for many years, but have now responded to Zurich's recent marketing campaign.

"They have discovered that Zurich, as a larger city, has a bigger offering of cultural entertainment, nightlife and shopping," Lauber told swissinfo.ch. "Many Arab visitors have discovered this and have told their friends and our hotels are very interested in fulfilling their needs," he added.

One of the main reasons for this is the spending power of holidaymakers from oil-rich and largely recession-proof countries. Arab tourists travel in large groups and spend an above average SFr500 ($460) per person per day, according to Lauber.

This makes it well worth the while of many hotels to put on extra night staff and different facilities to cater for them.

Such services are set to continue for a while as the Ramadan month will coincide with Switzerland's peak holiday period for the next six years. The Islamic lunar and Christian calendars do not match up, so Ramadan will start just over a week earlier each year as far as Swiss hotels are concerned.

The tourist industry in the German-speaking part of Switzerland is starting to wake up to Muslim guests, according to Abo Youssef, but it still has some catching up to do.

"In Geneva and French-speaking Switzerland they are very accustomed to Ramadan guests, as they are in mountain resorts. But large cities in German-speaking Switzerland, such as Zurich, Basel and Lucerne, are not yet fully equipped for these clients," he told swissinfo.ch.

Lauber conceded that hotels were not very forward looking six or seven years ago, but he insisted that recent inflows of Arabic visitors had made many change their ways. "They do not want to disappoint their new friends," he said.

Ramadan is Muslims' most important religious month as it is when the Koran was first revealed. It falls on the ninth month of the Islamic calendar – starting on August 22 in 2009 on the Christian calendar.

Most Muslims carry out Sawm or fasting, which is the fourth of the Five Pillars of Islam. Ramadan is also considered a time for greater spirituality, performing charitable deeds and spending time in prayer and contemplation.

During Ramadan many Muslims try to eat a large meal, suhoor, just before dawn. At dusk most Muslims will break the fast with dates and water, following the example of the Prophet Muhammad, before having a meal later.

The month of Ramadan ends with the Eid ul-Fitr festival, which is marked by visits to the mosque for prayer and gatherings with family and the community. 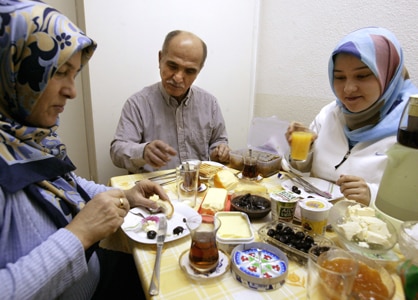 The Muslim holy month of Ramadan, the observance of which is marked by fasting in daylight hours, begins in Switzerland on Thursday. The majority ...