For Wikipedia founder Jimmy Wales, who was in Switzerland to receive the prestigious Gottlieb Duttweiler Prize, giving people access to knowledge is key.

Wales received the award, given to those who have made outstanding contributions to the community, on Wednesday evening for his free, online encyclopaedia.


Wales told swissinfo.ch beforehand that it was the most important prize he had ever received  and that he was amazed to be in the company of such past winners as former United Nations Secretary-General Kofi Annan.

Wikipedia, which was launched ten years ago this month and whose contributors are volunteers, now exists in 270 languages and has around 400 million users every month. It is run as a non-profit organisation relying on public donations, a situation which Wales has no plans to change.

The online encyclopaedia has big plans to expand in the developing world, with a new office to be opened in India.

swissinfo.ch: The prize’s press release praised Wikipedia as revolutionising access to knowledge as man’s most important resource. What is your comment on that?

Jimmy Wales:  Knowledge is our most important resource: the only way we can progress, make society better, make the world better is by understanding, by knowing and so it’s really important that as many people as possible have access to good quality information.

I believe that our humanitarian impact at Wikipedia is still yet to be realised, the really important work is yet to come, which is our work in the developing world as we’re seeing really fast growth in a lot of the languages of India. I believe, in the long term, bringing knowledge to people who previously had very little access to knowledge is going to be really quite amazing.

swissinfo.ch: It also praised Wikipedia for contributing to democratising knowledge.

J.W.:  The idea that we should have an open discussion, dialogue, debate, we should be transparent, respectful and thoughtful is really key to Wikipedia and that’s very different from a model from an elite few who decide things and then publish for everyone to see, so it’s a complete transformation in that sense.

swissinfo.ch: Have you been surprised at Wikipedia’s success over the past ten years?

J.W.:  I remember looking at a list of the top 100 websites many years ago and seeing an encyclopaedia reference style site at about number 50 and I remember thinking at the time that if we did a really good job, we might make it in the top 100 or top 50 and now Wikipedia is the fifth-most popular website in the world so obviously it’s exceeded even my very optimistic expectations.

swissinfo.ch: Quality is an aspect that has been criticised.

J.W.:  The main thing is having a core community that is really passionate about getting it right. What we want to do is give the software tools to that community so they can maintain and control the quality of the site and that’s worked very, very well and the quality’s been steadily increasing from the beginning and will continue to increase in the future.

swissinfo.ch: What do you think is the appeal of Wikipedia to its contributors?

J.W.:  First, it’s a charitable project, it’s a grand humanitarian ideal of free knowledge for everyone that is very inspirational to people. Secondly, it’s just fun, people just enjoy editing Wikipedia, they find it interesting, they meet other interesting people who are interested in the same things and they have discussions, debates and arguments and they work together and build something and they feel proud at the end of the day.

swissinfo.ch: There have been reports that fewer people are contributing. Is that something you are worried about?

J.W.:  Some of those reports are just wrong but we do take very seriously the question of how do we broaden participation. For us it’s not so much about the number of people participating, but it’s also about who is participating and we want to bring in more female editors, more older editors, people from areas of knowledge where we’re currently not as strong as we would like to be. So we have a lot of things we are doing to try to recruit new editors.

swissinfo.ch: What are your future plans for Wikipedia?

J.W.:  I think the biggest thing is our growth in the languages of the developing world, we’re opening our first office outside the US in India in the next six months and that will be there to support the growth of the Indian language versions of Wikipedia, we have over 20 of those. If that project is successful we’re going to replicate it in other places around the world because really the next decade is going to be about the growth of Wikipedia in the developing world.

Wales was born in Huntsville, Alabama in the United States. He studied finance and later worked as a trader in Chicago. He later became an internet entrepreneur, founding the portal Bomis with 2 partners in 1996.

In 2000 he founded Nupedia, which a web-based encyclopaedia with peer-reviewed contributions from experts. Wikipedia went online on January 15, 2001, having started as a side project.

Wales has separated from his second wife and has one daughter.

The Gottlieb Duttweiler Award is intended to go to people who have made "outstanding contributions to the well-being of the wider community and to a cultural, social or economic environment in which everyone can realise their potential and play an independent part in its development".

Gottlieb Duttweiler was the socially-minded founder of the Migros supermarket chain.

The SFr100,000 ($106,000) award was handed over at a ceremony in Rüschlikon near Zurich on Wednesday evening in front of invited guests.

He told Swiss television:  “Jimmy Wales could have earned a lot of money with Wikipedia, he decided to go without,  this project is financed through donations. It is for the community and is financed by the community, this is fantastic”.

The free online encyclopaedia Wikipedia – a source of information for many surfing the internet – has introduced Switzerland's fourth language ...

The online encyclopaedia Wikipedia, which is both popular and controversial in Switzerland and elsewhere, is celebrating its tenth birthday. Its ... 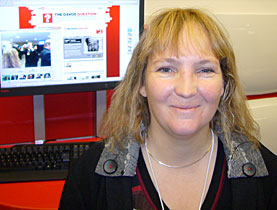 What the future holds for Wikipedia

Videos will soon be available on Wikipedia, and users will be able to compile their own mini-encyclopedias, says Florence Devouard, Chair of the ...

Dinosaurs in the workplace

Complaining about spotty wifi? What about the time when a computer took up a room? During a conference in February in Geneva called Lift, ...