The last of four paintings stolen from a museum in Zurich in 2008 has been found and returned to its owners.

The Zurich cantonal prosecutor’s office said on Friday that the picture, “Count Lepic and his Daughters” by Edgar Degas, had been recovered in Serbia a few months ago, but the discovery had not been announced because of ongoing investigations into the fate of the most valuable picture in the haul, Cézanne’s “Boy in the Red Vest”.

The Cézanne work, valued at SFr100 million ($109.6 million), was also found in Serbia and returned to Zurich earlier this month.

However, both pictures were damaged. Lukas Gloor, director of the Bührle Foundation which owns them, said repairs would take time, but that he was confident they could be restored to their former condition.

There were several tears and cuts in the Degas, although not in central spots.

The Cezanne fared better, with only one corner damaged.

During the robbery they were cut out of their frames, leaving them in a very fragile state, Gloor explained.

The other two pictures, Claude Monet’s “Poppy field at Vetheuil” and Vincent van Gogh’s “Blooming Chestnut Branches” were discovered in a car parked at a mental hospital in Zurich shortly after the robbery.

The Swiss and Serbian police collaborated closely in the search for the missing pictures, which at times involved investigators from six countries. Undercover agents were also brought in.

Four men – three Serbians and a Montenegrin – are being held in custody in Serbia.

The Cézanne oil painting seized in Serbia earlier this month is now back in Zurich. “The Boy in the Red Vest” by French Post-Impressionist Paul ...

"Works of art should not be hung in bunkers"

Following the return of a stolen Cézanne masterpiece, the president of the Swiss Museums Association tells swissinfo.ch about balancing security ...

Two years ago thieves stole SFr180 million ($169 million) worth of art from the private Bührle collection in Zurich, in one of Europe’s biggest ... 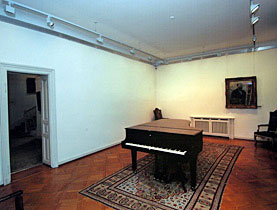 The armed robbers who drove away from the Bührle museum in Zurich with paintings worth SFr180 million ($165 million) have set wheels in motion in ...

The private art collection of industrialist Emil Bührle is said to be one of the best in the world. It contains works by masters such as van ...