The year is 2032. Zurich, ravaged by the economic crisis, has become a violent, lawless no-go zone. But then a giant vigilante turns up in medieval hunting gear…

Tell: The Legend Returns sees the Swiss national hero with a nice line in crossbow tricks appear as a comic superhero in the mould of Batman and Superman, but with a hint of the Terminator and RoboCop.

The comic’s Swiss creator, David Boller, who studied in the United States and worked for Marvel and DC among others, tells swissinfo.ch about Switzerland’s relationship with comics, how he got the idea for Tell and whether there’s a moral to the story (listen to audio for extended interview).

swissinfo.ch: What are your first memories of comics?

David Boller: My very first memory was when my mother gave me Tintin in America. I was five years old and I’d never seen anything like it – for a five-year-old Tintin just blew everything away.

Of course Mickey Mouse was really big and I had a subscription to the Mickey Mouse magazine which was fantastic – and those little pocket books, Walt Disney’s Lustige Taschenbücher, which were little collections of mostly Scandinavian and Italian material. Then there was Fix and Foxi, a sort of German Walt Disney knock-off…

D.B.: It was fairly common in my school at the time, but you’ve got to remember that that was the heyday of kiosk comics – you’d go to the newsstand and have dozens and dozens of comic book series.

When I was 13, I went to school in Zurich. The first comic store opened there in the early Eighties and it was literally El Dorado! Simply unbelievable. They had graphic novels from all over the world and pretty much all my lunch money went on that stuff.

swissinfo.ch: Are there regional differences within Switzerland? I imagine the French-speaking part of the country is closer to the French and Belgian comic tradition.

D.B: Asterix [by French cartoonists Goscinny and Uderzo] was always big in the German-speaking part, too. As were Lucky Luke and Tintin [by Belgian cartoonists Morris and Hergé respectively]. Asterix and Lucky Luke never really appealed to me, but certainly the Suisse Romande is extremely French-centric. Bear in mind that the most popular cartoonist in France at the moment is Swiss: Zep [Philippe Chappuis] has a series called Titeuf and it’s an incredible success; they sell millions of every new issue.

A taste of David Boller's comic, Tell: The Legend Returns. The entire comic can be read, in English, online. See the accompanying story for details.

swissinfo.ch: How did you get the idea for Tell?

D.B.: I was in the States and it dawned on me about ten years ago that there’d never been any Swiss superheroes. My initial idea was for a sort of superhero team hiding in a cave in the Swiss Alps – which actually we’ll get to in the second Tell book.

And then towards the end of my time in the States I realised that I should do something with Tell, the archetypal hero. But 9/11 had happened and I’d seen what the Americans had done with patriotism, and then the financial crisis happened and I thought ‘Swiss banks, Tell, patriotism’ – at that moment it all sort of came to me.

I never saw myself as a patriot; I always saw myself as a world citizen. Patriotism is a control mechanism to get people to do stuff they otherwise wouldn’t do. It’s very simple and it’s despicable. It’s one thing to be proud of your heritage, but to use it to go to war – especially what the Americans are doing – I think it’s absolutely despicable.

swissinfo.ch: Tell is set in a police state in which the controlling party bears a striking resemblance to the rightwing Swiss People’s Party...

D.B.: In fact the main guy is called Cholber, which is an anagram of Blocher [the People’s Party’s figurehead] – he looks the part too.

Also, at the end of the first book Tell turns out to be a cyborg, the perfect control unit – a sort of RoboCop meets Terminator – and over the next two books he has to find himself, because a cyborg is still part human.

swissinfo.ch: Is there a moral to the story?

D.B.: It should be good entertainment, but I also want to show people how difficult it is to navigate life these days and deal with the messages we’re getting. The biggest moral really is don’t believe everything the politicians and banks are telling you, and what they say is patriotic and what is not patriotic. I wanted Tell to be a very brutal vigilante hero to show people that it’s not clear who’s good and who’s bad. It’s just a question of who has what motivation.

We’ve got to be careful. I’d say Switzerland is still pretty much the best place to be in Europe – we are living in a little paradise – but the European Union... Just travel around the rest of Europe and it’s not that great.

swissinfo.ch: How would you describe the comic’s style?

D.B.: I really wanted Tell to look like a flawless American comic. I didn’t want it to be too artistic. I was wondering whether I should go a little more Frank Miller [film noir-influenced author of Batman: The Dark Knight Returns, Sin City and 300] – should I be more artistic with the panel layout? –  but I thought no, not for the first series: I just wanted to make it accessible, so people could look at it and see everything immediately.

swissinfo.ch: If the three books sell well, would you extend the series?

D.B.: I’m going to leave it somewhat open. If it turns out to be a big success, I’d be foolish not to give myself the opportunity to continue it one way or another.

There’s also the option of doing a true historical comic. Initially I was going back and forth asking myself how much literature and history should be brought in. I thought, well, if people really like that style, it doesn’t have to be superheroic – it could be maybe a little more French-looking, just like a really nice comic. Essentially it would be an adaptation of the Schiller play.

David Boller was born in 1968 and grew up near Zurich.

After self-publishing a series of comic books in Europe and founding his own comic magazine in 1988, at the beginning of the Nineties he graduated from the Joe Kubert School of Graphics and Cartoon Art in New Jersey.

After graduation he worked for Marvel, DC, Acclaim, Wildstorm, Top Cow and Warp Graphics on a variety of titles such as Spiderman, Batman, Witchblade, Magic the Gathering and Star Wars.

In 2008 he moved back to Switzerland to found Virtual Graphics and Zampano, Switzerland’s first professional online comics magazine.

Tell: The Legend Returns is a three-parter which can be read free online, including in English. In the shops it costs SFr20 ($20.50) per issue. The second issue will be published in June 2011 and the third in January 2012.

According to legend, William Tell came from Bürglen, canton Uri, and was an expert shot with the crossbow.

At the beginning of the 14th century, the Habsburg emperors of Austria were seeking to dominate canton Uri. Gessler, the newly appointed reeve of Altdorf, raised a pole in the village’s central square, placed his hat on top of it, demanding that all the townsfolk bow before the hat. When Tell passed by the hat without bowing, he was arrested.

As a punishment, he was forced to shoot an apple off the head of his son, Walter, otherwise both would be executed. Tell was promised freedom if he successfully made the shot – which he did, on November 18, 1307.

But Gessler noticed that before the shot Tell had removed two crossbow bolts from his quiver, and after the shot asked him why. Tell replied that if he had killed his son, he would have turned the crossbow on Gessler.

This didn’t go down well, and Tell was bound and brought to Gessler's ship to be taken to his castle at Küssnacht. A storm broke on Lake Lucerne and Tell escaped. He ran to Küssnacht and when Gessler arrived, shot him.

William Tell is said to have died in 1354 while trying to save a child from drowning in the River Schächenbach in Uri.

Lucerne may be a perfect tourist destination but until now it has not been known as a centre for cutting edge art. This may be about to change, ... 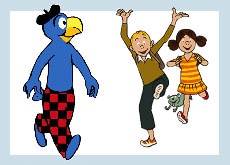 Globi, the blue parrot with the big heart, is one of Switzerland's most famous cartoon characters. This year he celebrates his 75th birthday. The ...

The legendary Swiss hero William Tell appears on all sorts of products. He can be seen on everything from coins to stamps, beer bottles and ...