As thousands of Swiss head overseas for their annual vacation, a hotel inspector tells swissinfo.ch what holidaymakers can expect - and how to avoid pitfalls.

Nina-Vanessa Heinemann works for Swiss-based holiday review portal Holidaycheck, the largest of its kind in the German-speaking world. She also appears as an expert on television.

July sees the beginning of the holiday season with many Swiss heading to Italy, Germany or France. Other popular destinations include Turkey or Egypt.

In her work, Heinemann, a German national, checks in as a normal hotel guest and assesses the establishment's standards of cleanliness, friendliness and information. Her passion, she says, is to find out whether guests are viewed as guests or merely as cash cows.

swissinfo.ch: What is the standard generally like in the popular holiday destinations?

N-V. H.: Well, it’s very, very different. In Germany, for example, there is a very strict regulation of stars by the German hotel and restaurant association. In other countries it's different. Sometimes it’s the state, the government or the minister for tourism.

You have a comfort standard in Germany, Austria or Switzerland for a three-star hotel, but if you going to Turkey or Egypt and book a three star hotel, you'll only get a hostel-type standard.

swissinfo.ch: What would be your advice to Swiss holidaymakers?

N-V. H.: The main advice is to check out what you want. Do you want to a club, a resort, more of a bed and breakfast or a luxury place? Then check the price and read the hotel’s instructions. Then you have to find out how a guest is really treated in the hotel and that is best done by reading reviews.

swissinfo.ch: Sometimes the hotel looks great in the catalogue, but when you arrive you find a motorway instead of the sea view.

N-V. H.: Yes that’s definitely the point, you have a catalogue language. The homepage and the catalogue are the only ways for hotels to present themselves, that’s their marketing tool and they want to present themselves the best way they can. So they have a language, like "in a central place" and that always means you have either cars, planes or buses in front of you, you're in the middle of a shopping centre or a lively area where people are going out around the clock and having fun, screaming and yelling.

swissinfo.ch: What have been the worst hotels you have inspected?

N-V. H.: I went to Turkey last year and there was a five star spa and luxury resort and I thought this must be great. And when I entered the hotel it was not that people were just unfriendly; they were so rude that they barked "passport" instead of asking to see it... Then I went into the room and there was water dripping from the air conditioning and the carpet was totally wet. I went to reception and asked for someone to fix it. Four hours later somebody came took it down, opened it, closed it again and that was it. It started dripping again, filling a glass in eight minutes.

I went down and said I wanted to talk to the manager and the manager said after dinner and I said perfect because I want to eat something. I thought maybe at least the food was good… and I went to the buffet and I was shocked. I haven’t ever seen this in my whole career in a five star hotel. There were just three food stations of French fries, bread and lambs liver, at least there was a sign telling me it was that, it looked like green eggs and vegetables … it was disgusting. There were little flies on the salad buffet. The only thing you could eat was fresh bread.

I asked the manager and he said they’re just Russians here and they’ve just destroyed everything so I’m not interested in investing some more money. I said how old is this hotel, he said: one and a half years. I asked whether he was interested in cleaning the rooms, the entrance hall or the windows. The answer was no. At least it was not just his fault alone, the tour operators are responsible too. They have to check out what people are booking.

swissinfo.ch: What should holidaymakers do in this kind of situation?

swissinfo.ch: But most of the time the hotels are alright?

N-V. H.: It’s 50/50. Sometimes you have good hotels. I was in Ibiza and I had a four, three and two star hotel and the best one was definitely the two star. It was the cleanest, had the most friendly people and the best food. So you can be surprised.

swissinfo.ch: What happens after your inspection?

N-V. H.: I go and speak to the people... My passion is to talk to them and confront them directly with the things I have found and to let them know what is going badly or well in the hotel. Mostly people really enjoy that, because they say that nobody had told them. Sometimes, they say: I know, but I don’t want to change it.

swissinfo.ch: Some people might say you have a dream job.

N-V. H.: Sometimes it is and sometimes it's very hard, like if you’re in a hotel like the five-star one in Turkey, as you feel that you don't want to sleep there. Not everyone wants to go to reception and complain because they think they will be thrown out of the hotel. I want to show that it's not the way hotel managers react normally. They try to help.

Most Swiss travel takes place inland at around 45 per cent of overall trips, according to Federal Statistics Office figures for 2008.

The most popular foreign destinations are: Germany, France, Italy and Austria – Switzerland’s neighbours. A Swiss trip lasts on average 3.6 overnight stays; a foreign one, 15.6.

Trends flagged up by the travel industry for 2010 include dollar destinations (profiting from the Obama effect), all-inclusive packages and city trips. The Mediterranean remains a favourite for families.

An online survey by Monster.ch, published on July 7, suggested that the Swiss were more likely to spend more on their holidays than their German or Austrian neighbours. Only 33 per cent of those polled said they would stay at home compared with 49 per cent of Germans and 44 per cent of Austrians.

She now works for Holidaycheck, a Swiss-based holiday review portal in Bottighofen on Lake Constance, which is the biggest German-language portal of its kind. Its biggest rival is TripAdvisor.

Heinemann is in great demand as a television expert, having appeared on German channels (which can also be seen in Switzerland). She can be seen on Kabel 1 from July 18 in the programme “Mein Revier”.

The Swiss take around four weeks a year of holiday, with French-speakers taking the longest vacations, according to a study. The report, issued ...

A summer campaign to encourage hiking in Switzerland sounds like trying to reinvent the wheel, as every tourist knows there are thousands of ... 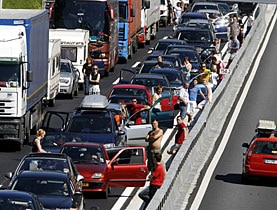 Two months of motoring misery start on Swiss roads this weekend, with the summer holidays responsible for long queues and short tempers. As Swiss ...

Holiday on the farm Once it was a service to the country, now it's an alternative holiday

Every year about 3,000 young people spend a working holiday on one of 1,200 Swiss farms. It's an opportunity to be close to nature, see where our ...