Inside the pink shop, plans are being drawn up for two coffins: one in the shape of a guitar, another with a rear-view mirror.

One customer wants to be able to “to look back on his life”. The other is a musician planning the ultimate guitar case.

They are two of the more unusual requests to have come through the doors of the Sarg Atelier (Coffin Workshop) since it opened on the banks of the River Aare in Thun in 2009.

Step inside the shop and you enter the world of its owner Alice Hofer. Dressed from head to toe in pink, she applies the same love of colour to the interior of her shop – and her coffins.

Gone is the solemnity usually found in funeral homes. Instead, ambient music plays softly in the background, a few candles are lit and coffee is served in cosy sitting areas. The pink reception area is replete with books by Persian philosophers, cards and CDs by Alice’s husband, the Swiss German rock star Polo Hofer.

“Death and dying and transforming have always been major issues in my life. I was really taken by the subject even when I was very young. It’s always been really fascinating for me, so it’s just logical that eventually I decided that I wanted to be involved with the subject on a regular daily basis,” says Hofer over coffee.

“I really felt a strong attraction to establish a safe space where people could just come in and talk and cry and laugh and deal in whatever way with the subject.”

Hofer can trace her first thoughts about death to her childhood autumns.

“I remember walking through the woods and wondering where do the leaves go after they fall from the trees. And what beauty there is in this process of dying. I figured that if nature can show us such a beautiful performance of life and death, then we could maybe learn something from it, we could imitate this process. That is my greatest motivation.”

As such, her business is there to help people choose a coffin and start thinking about their funeral arrangements. Customers are invited to fill in out a booklet for “arranging my earthly farewell”, which involves big decisions such as whether to be cremated or buried, and the minor, like what music to play at the funeral.

“I encourage people to become familiar with their own needs. Like how do we want to present ourselves in these last moments,” said Hofer.

“As we go through life there are so many things that fade away. But the one impression we have of a person lying in a coffin, this will never ever fade. This memory will always stay with us.”

As well as bespoke shaped coffins, she sells others that are decorated on the outside for around SFr2,500 ($2,532). The multicoloured array on display range from a red coffin with the Swiss cross and edelweiss to one covered in fake grass – a nod to the German phrase to “bite the grass”, that is, to die.

Her business does attract criticism, Hofer admits. “People say it’s odd and crazy and unsympathetic. But of course I don’t pay much attention to those kinds of remarks because I am so convinced of what I am doing and that this is a need for so many people.”

A search on the web for decorative coffins in Switzerland brings up few results; more common are offers of eco-friendly constructions, made of other materials besides wood.

According to J. Voeffray & Fils, a funeral home in Sion, decorative coffins are very rare in Switzerland but could become trendy. “Such things happen in cycles,” said the funeral home’s Cedric Voeffray.

British company Crazy Coffins has been making unusual versions for the past decade. Their work has even gone on show in museums and galleries around Europe.

John Gill, one of the directors, told swissinfo.ch: “There are people buying coffins made of wicker, bamboo, banana plant leaves, cardboard. There’s every kind of product out there - which there wasn’t 20 years ago when everyone went down in a wooden box.”

“So the market has definitely changed. I think it’s part and parcel of the wider social movement in the last 20-30 years.”

During the 1990s interest grew in decorating standard shaped coffins and these have since become more commonplace in Britain, he notes, with around one in every 100 coffins decorated.

He says influencing factors in bespoke coffins have included a growing desire for designer goods and people hearing about new ideas through the media.

There was also a surge in the 1990s in funerals among gay men who had died of Aids. “They were people who often had money and a taste for show. And often they were quite courageous in death and said we’re going to have a party, not a terribly depressing, dreary thing,” said Gill.

His workshop is currently making a Viking coffin for a woman with Viking ancestry, and a beer bottle for a man who owns a brewery.

This connection to a person’s profession, like the Swiss musician waiting for his guitar-shaped coffin, is common in Ghana. In the Ghanian capital Accra, well-known for its vibrant sculptural coffins, a fisherman will typically be buried in a fish coffin, a mother in a hen and a farmer in a cocoa pod.

It’s a tradition belonging to the city’s majority Ga tribe, who approach death as a time to mourn and celebrate life and use brightly coloured coffins in any form to reflect either the job, status or a particular attribute of the deceased.

In starting her business, Alice Hofer was inspired by the approach to death she saw in Mexico.

“They are very open towards the combination of death and beauty. For them it seems to be an aspect of life and in our culture it seems to be the end of life,” she said.

“I basically try to integrate all these aspects into the here and now. I’m sure it’s not just a trend, it’s a new and important way of looking at life and death.”

Hofer’s obviously already planned her own departure. But there won’t be any coffin or urn. Instead her ashes will be “blown away in the wind”.

Decorating a traditionally shaped coffin takes around 12 hours to complete. They sell for around SFr2,500. The shop also sells small coffins for babies.

Urns of all shapes and sizes are sold.

Pet owners can buy boxes for burying their animals or for keeping their ashes. Boxes vary from SFr30-500.

Visitors to Sarg are encouraged to fill in a planner where they can list all their preferences for their funeral.

A counsellor and Christian theologian is also on hand to talk to visitors.

The word coffin is derived from the French “coffin” and the Latin “cophinus”, which is the Romanisation of the Greek word “kophinos” meaning basket.

Coffins were until recently largely the domain of the funeral industry. Manufacturers usually do not sell directly to the public and will tend to work directly with funeral homes.

Funeral homes normally have showrooms where the coffins or pieces of material used to make coffins are displayed. Many now sell online.

But some coffin centres now encourage friends and family to paint a design or sign the coffin.

People are also commonly choosing environmentally-friendly and biodegradable coffins made of willow or seagrass for example.

Coffins can differ according to cultures. In some forms of Orthodox Judaism the coffin has to be made of wood and contain no metal parts. Coffins made from decay resistant wood such as cypress are in high demand in China and Japan.

The Ga tribe in Ghana create brightly coloured coffins in various shapes such as fish, animals or Bibles. A coffin can take on any form reflecting the occupation, status or particular attribute of the deceased. The National Museum of Funeral History in Houston, Texas is home to the largest collection of Ghanaian coffins outside Africa.

In the 1990s, American rock group Kiss – keen on their band memorabilia - produced a Kiss Kasket. 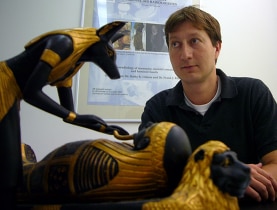 Researcher is no mummy's boy

Swiss doctor Frank Rühli is just 36 years old, yet he is already recognised as one of the world's foremost mummy researchers. The thrill of ...

Wondering why you’re suicidal, or if living close to an airport increases heart attack risk? If you live in Switzerland, researchers may have ...

Whereas in Germany the ashes of the deceased can only be buried in a cemetery, in Switzerland people are allowed to scatter them in the open. A ...