When Charlie Chaplin died at the age of 88 at his Swiss home, he left behind a legacy unparalleled in the history of cinema. Chaplin's son, Michael, gave swissinfo.ch a tour of the family estate and spoke about plans to turn the house into a museum.

The library at the Manoir de Ban, in Corsier-sur-Vevey, is still much as the great film-maker left it when he died in his sleep in the early hours of the morning on Christmas Day in 1977.

The bookshelves are lined with leather-bound collections of Punch and Strand magazines dating back to the late 19th century.

Beside a large wooden desk is the sofa Chaplin used in a scene from the 1931 film, "City Lights".

"When he was writing, he'd sit at the desk or in the armchair in the library and dictate. His secretary would come in and would take notes," says Michael Chaplin, who returned with his own family to live in the house ten years ago.

The victim of a witch-hunt during the McCarthy era in the United States, Chaplin was already in his 60s when, in 1953, he chose to live in exile in Switzerland with his family.

But the artist did not retire. He continued to make films, composed the musical scores to accompany re-releases of his silent movies and wrote his autobiography.

The Manoir de Ban is now destined to become "Chaplin's World: The Modern Times Museum". Devoted to the film pioneer and the early days of Hollywood, the site will also include a movie theatre, an outdoor stage and a film school.

"There had been plans for a museum in London and for one in Hollywood," says Chaplin, the driving force behind the Swiss proposal.

"So when we came up with the idea for the Manoir de Ban, we had to persuade everyone that Switzerland was the best place – in the house where he spent the last 25 years of his life."

The heritage site will not only encompass the manor house but also its parks, gardens and outbuildings that sprawl over 14 hectares overlooking Lake Geneva and the Alps.

Though the estate remains much as it was in his father's day, Chaplin hopes that relatives and friends will return pieces of furniture, paintings and souvenirs which once decorated the house.

It will help recreate the atmosphere of the last decades of the film-maker's life when he raised the eight children from his last marriage.

"If we had any influence on him, it was to make him relax and think a little less about work and to enjoy life which I think he did when he came to Europe," remembers Chaplin.

"It wasn't only us; it was being in Europe away from the pressures of Hollywood. For the last 25 years, I think he did have a family life, a regular routine and was emotionally stable. That all happened here in Switzerland."

And his low-key lifestyle may have disappointed the Swiss police who kept a file on him. The file was only made public long after the film-maker's death.

When he wasn't working, Chaplin says his father toured the Swiss countryside.

Chaplin also says the family used to walk down to the lakeside town of Vevey to go for dinner. The movie star enjoyed being able to move about in public without being mobbed by fans, as was often the case when he travelled abroad.

Charlie Chaplin did, however, enjoy his celebrity status. He loved entertaining artists and other celebrities at the Manoir de Ban.

There are two framed black-and-white pictures sitting on the grand piano in the sitting room of the house. One is of a grey-haired Chaplin directing a film scene, and the other is of the great pianist and family friend, Clara Haskil.

"He had great admiration for her. She would always come at Christmas," Chaplin recalls. "After the meal, she'd play on the piano and we'd sit and listen, but of course as a kid, I used to think it was a bit boring. But having heard her records since, I realise it was a great privilege."

Down the road from Vevey, the largest collection of Chaplin documents, ranging from manuscripts to old photographs, is stored in the town archives of Montreux.

"The Chaplin Project" (see related story and link) based in the Italian city of Bologna has been entrusted with the task of restoring Chaplin's films and is currently making a digital record of the documents.

The digital database will be available to film scholars and historians on the Internet as early as the middle of next year.

Once the cataloguing is complete, the documents will go to the Montreux archives, including those which had been stored in California and at the official "Association Chaplin" bureau in Paris.

No special ceremony has been planned to mark the 25th anniversary of the film-maker's death.

The best tribute that can be made to the memory of Charlie Chaplin, says his son, is the creation of the proposed museum and the return of his films to the big screen.

"A lot of work has been done to get his films back into the cinemas, especially in France," says Chaplin.

"I think it's very important that not only my father's films but old films are seen again in the cinema and not just condemned to be watched on television... especially comedy films because they need an audience. Laughter is contagious."

Chaplin was born on April 16, 1889 in London. He made his first appearance on stage in 1894 in a London music hall to replace his mother who had taken ill during the performance.

From a broken home, Chaplin spent many years of his early youth in a workhouse along with his brother Sydney.

He began his career as an actor on the English stage in 1903. Chaplin toured the United States as a member of the Karno troupe in 1910. Four years later, he made his first appearance in films for the Keystone Studios.

Chaplin's "Tramp" character first appeared on screen in one of his early Keystone shorts, "Kid Auto Races", in 1914. The character helped make him a leading Hollywood star. Chaplin founded United Artists together with Douglas Fairbanks, DW Griffith and Mary Pickford in 1919.

He defied the arrival of sound in films with the release of commercial and critical successes, "City Lights" (1931) and "Modern Times" (1936). In 1947, he was accused of being a communist sympathiser and left the United States for good in 1952, and settled in Switzerland the following year.

He made his last film, "A Countess from Hong Kong", in 1966. Chaplin returned to Hollywood to receive a special Oscar in 1973. He was knighted by the Queen of England two years later. He died at his Swiss estate on December 25, 1977. 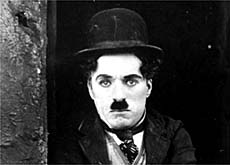 The "Chaplin Project", based in the Italian city of Bologna, has been entrusted with the task of restoring the artist's films and digitalising his ...