Intricately carved in the shapes of humans, birds and animals, a collection of stringed musical instruments from India is attracting people to Museum Rietberg in Zurich.

The Sculpted Sound exhibitionexternal link features more than 90 stringed lutes – most of them made by the Santhal people, one of India’s oldest and largest tribes. An estimated six to ten million Santhals live in the rural areas in the states of Jharkhand, West Bengal, Bihar, Odisha and Assam, as well as in neighbouring Nepal and Bangladesh.

It was the Sarinda – one of the oldest sculpted musical instruments carved by the Santhals –that first caught the interest of collector Bengt Fosshag. A successful illustrator and graphic designer from Germany, Fosshag is known for collecting some of the world’s most important lutes.

“It was sometime in the 1960s when a friend of mine from Lahore brought me a Sarinda that looked a bit like a human skull,” he told swissinfo.ch.

Fascinated by the Sarinda, Fosshag decided to amass similarly sculpted stringed instruments. He then acquired a Dhodro Banam, a hollow one made from a single piece of wood, and a Huka Banam, a lute referred to as a “coconut instrument” – which has no tuning peg, and the string of which is knotted to its neck. Both of these have vanished, even from the Santhal community, and have been replaced by more modern instruments.

Fosshag donated the majority of his huge collection to the Linden Museum in Stuttgart in 1996; the rest has now made its way to Switzerland. While Museum Rietberg was able to purchase some of these instruments, the rest were a gift from Fosshag.

“You have to bring them to such a museum to give them recognition,” says Fosshag of smaller cultures that are more-or-less unknown in Europe.

“To give a full view and meaning of a culture is very important and that is what interests us. It is really sad to see that due to globalisation, only the high cultures from big cities like Hollywood movies and music are gaining importance. The smaller cultures, even though they exist in very remote areas, are somehow fading away. They are dying out and we need to preserve them,” Lutz told swissinfo.ch.

Museum Rietberg specialises in the old cultures of Asia, Africa and Columbian America. One of its main focuses is South Asian and Indian art.

“We have an important collection from Hindu and Buddhist cultures as well as Indian miniature paintings. For the past decade, we have also been very interested in the tribal arts of India,” added Lutz.

To gain a better understanding of the Santhal people and their culture and musical instruments, the Rietberg is collaborating with the National Crafts Museum in New Delhiexternal link.

“At the moment one really does not know a lot about these instruments – their iconographic details and what and how they were used. A joint scientific study with India to understand and document the history, culture and music of the Santhals will help us find more details,” noted Lutz.

The National Crafts Museum will work with Museum Rietberg to conduct a scientific study on the Santhal instruments.

“We are a very unusual museum of living traditions and this is very much within the kind of area that we work in,” said Ruchira Ghose, chairwoman of the National Crafts Museum.

Every month, her museum invites 50 craftspeople from all over India to showcase their art, music and craftwork.

“We have galleries displaying their work and we also have live performances. So this way we’re not just communicating the rich heritage of Indian crafts, but also supporting their livelihoods,” says Ghose.

While Museum Rietberg shows Fosshag’s collection and researches the history of the instruments, the crafts museum in Delhi will also have an exhibition and invite a group of six Santhals for a musical performance. With their highly developed dance and musical traditions, the Santhals have influenced many other arts – such as Rabindranath Tagore’s music in Bengal or even the Indian film industry, Bollywood.

“There is, on the one hand, a lot of influence from the Santhals through mainstream art and I find it very puzzling that – unlike other tribal groups from India that now have certain status in India and internationally in the art circle – the Santhals have never got that recognition. So these exhibitions are extremely positive and will help their art emerge, and they could reach the level where they ought to be,” Ghose said.

The exhibition at Rietberg – the first of its kind to run for almost a year – will see several visits by Indian researchers to Zurich for a number of events, workshops, concerts and lectures to help with the scientific study.

But Fosshag has his regrets.

“I have never been to the land where my collection comes from. I wanted to visit India in 2000, but I became very sick and now I am too old to travel.” Fosshag, now in his seventies, mostly built his collection via dealers from Germany, France and England.

“To me it’s more about what I think and imagine them to be, and I have created an image about them over the years in my mind,” he said.

Thanks to the research being conducted, it’s just a matter of time before Fosshag will know whether his imagination of the Santhals and their instruments matches reality.

Two curators at the Rietberg Museum, Marie Eve Celio Scheurer and Johannes Beltz, are piloting this project with Ruchira Ghose, director of the Crafts Museum in India. The two museums will publish their findings at the end of their research.

The book on the life of Santhals will include interviews of Santhal craftspeople, musicians and dancers. It will also include essays by scholars working on Santhal community.

Switzerland doesn’t have a colonial past like many other European countries. This meant Swiss collectors were some of the first to look at ...

Luthier ‘The lute is a marvellous little construction’

In his search for the perfect sound, Jorge Sentieiro is especially happy if he finds it on one of his own historic instruments. The Portuguese, ... 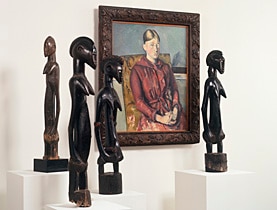 An art encounter of a different kind

At first glance, impressionist painter Monet may not have much in common with the tribal carvings of spirit crocodiles from Papua New Guinea – or ...