Relations between German- and French-speakers in Switzerland are still primarily defined by language.

That was the conclusion of a recent seminar in the bilingual city of Biel, which set out to explore multilingualism.

“In discussions about bilingualism, we have to be clear whether we are talking about it on an institutional or and individual level,” Iwar Werlen, professor for linguistics at Bern University, told swissinfo.

Werlen took part in a research project which analysed social networks in Biel where, according to the latest census, 14,000 of the city's 49,000 residents are French speakers.

Biel is unusual in that it is one of only a few bilingual cities in Switzerland. “We have a law in Biel that allows us to communicate with the authorities in either French or German,” Werlen said.

In the past 30 years, the number of French speakers in the city has declined by 14 per cent.

Biel is typical of many cities along the "Röstigraben" – the imaginary linguistic barrier between French- and German-speaking Switzerland.

“For the past 30 years people in western Switzerland have believed that French is being ousted by German,” historian Bernhard Altermatt told swissinfo.

“The number of German speakers has been declining since 1900 but people are still afraid of being “Germanised”, and that has influenced local policy,” Altermatt said.

Linguist Claudine Brohy says that even though the German speakers are in the majority nationwide, Fribourg is very much a French city.

“Fribourg does not really promote its bilingualism,” she told swissinfo. “We have not had a German speaker in parliament for a long time.”

“I also think it is a shame that there are no bilingual schools in the nearby canton of Fribourg,” Brohy lamented.

Other languages have made their way into Switzerland and have influenced the national languages.

“Immigrants from Portugal, Spain or Italy normally send their kids to French-speaking schools. Those from Turkey and the Balkans prefer a German-speaking education,” Werlen told swissinfo.

“The integration of immigrants from the Balkans is very good. Especially the second generation speaks German as their mother tongue, even though they don’t speak it at home.”

However, Brody thinks another bone of contention between French and German speakers is dialect.

“Swiss-Germans prefer speaking French to High German and the Swiss-French use the excuse of not understanding the Swiss-German dialect,” she said.

But according to Werlen there is a big difference between the two bilingual cities of Fribourg and Biel. “In Fribourg you’d always approach someone in French, whereas in Biel it doesn’t matter.”

The two-day seminar “Bilingual Cities” took place from March 19 to 20 in the bilingual city of Biel.

It was organised by the “Forum for Bilingualism”. 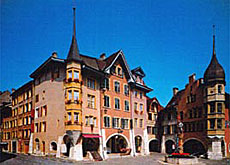 Biel presented itself in its best light last year when it was one of four sites for Switzerland’s national exhibition, Expo.02. But with the ...