Fifteen years in the making, the Chaplin museum is entering the final stages of preparation. swissinfo.ch took a walk through a very muddy building site above the Swiss city of Vevey.

Chaplin’s World, programmed to open this coming spring, aims to reinvent the museum-going experience. Set in a 14-hectare park of lush trees, it will occupy the mansion where Chaplin lived his last 25 years.

“No other museum in Switzerland will attract people from the other side of the planet,” claims Yves Durand, the Canadian cultural entrepreneur who instigated the project in 2000 with his architect partner Philippe Meylan.

Durand enters the room in shirtsleeves despite the winter coolness of the makeshift offices in an offsite barn in the village of Corsier.

We are less than a kilometre away from Le Manoir de Ban, the neo-classical listed building above the village where Chaplin lived with his family. We will visit it later on, but only from the outside, as it has been stripped bare and is being entirely refurbished, including the service buildings. A large purpose-built studio, which will provide visitors with a Chaplin movie-immersion experience, is in the final stages of being fitted.

On the ground floor of the offices, Charlie’s possessions are stacked high, waiting to be returned to the mansion when the refurbishment is complete.

Volumes of ‘Punch and Judy’ stand in endless reams of leather-bound books above the trunk that accompanied the ‘Tramp’ in his travels. A magnificent gilded mirror overlooks the chintzy furniture and furnishings that have yet to be renovated by craftpersons before they make their way back to the museum.

To complete Chaplin’s portrait as a writer, composer and producer, the project developers have had access to his 81 films, 15,000 photos stocked at the Elysée Museum in Lausanne and 200,000 documents archived in Montreux.

These are the remnants of a surprisingly bourgeois interior fitted in the mansion by Charlie, the son of British vaudeville artists, and his wife Oona, née O’Neill, the daughter of American playwright and Nobel laureate in literature Eugene O'Neill. They would not look out of place as a stage setting for a late-19th century period piece.

Chaplin decided to reside in Switzerland from 1952 onward after being refused re-entry into the US during the McCarthy era.

He lived with his family in Corsier until his death on Christmas Day 1977 at the age of 88. Oona, who was 35 years younger, gave him eight children. Two, Eugene and Michael, were still living in the mansion when Durand approached the family in 2000. Their mother had passed away in 1991.

Asked whether his North-American emotional brashness had helped him to secure the family’s confidence - they could, after all, have sold the mansion for a higher price to a property developer - Durand answered that emotion is at the heart of everything that Chaplin did.

“We promised Chaplin’s children that we would not attempt to interpret their father, but let him speak for himself.”

In the end, the heirs gave Durand and his associates not only the exclusive licensing rights, but they also opened up their childhood memories (albums and movies), which will become part of the display.

Durand’s enthusiasm gives him a youthful exuberance as he explains why he never gave up on the long-running project despite the numerous setbacks.

Once the family was persuaded to sell the mansion, he had to contend with the wall of scepticism that the project came up against when it was presented to the locals and their political authorities.

Among the resistance was the fear that a Disneyworld-like park would ruin the Chaplin heritage and landscape. Doubt was also expressed about the viability of the business plan. “We needed to convince everyone of the quality of the concept and gain their trust.”

Whereas negotiations concerning environmental and transportation issues went remarkably smoothly, one private neighbour’s opposition was more difficult to overcome.  Durand estimates that seven out of the 15 years of project development were spent in legal procedures and Swiss courts.

“It wasn’t such a bad thing,” he reflects. “Slowing down the process allowed us to come up with an even better project.”

He is nevertheless boundlessly optimistic about the outcome. “I’m from North America, I’m a dreamer,” he says, adding that to be a dreamer where he comes from is a positive thing. New sources of investment have allowed the private financing to expand from CHF20 million to CHF60 million.

Durand points out that out of the 1,000 museums of Switzerland, only 15% are privately funded. Chaplin’s World now has private investors from Luxemburg, Switzerland and Canada on board, as well as bank financing. Additional partners are canton Vaud, which put up an interest-free loan, and Grévin, the French entertainment empire responsible for the famous wax museum in Paris.

Our visit takes place in two separate venues that mirror Chaplin both as a man and an artist. The Manoir de Ban mansion is dedicated to his life and his lifestyle: “We speak about everything and hide nothing, including the problems he faced as a womaniser,” reveals Durand.

The newly-built studio, which is 16m high to accommodate stage sets and includes a 150-seat cinema, will present the artist and his oeuvre. Durand has worked with renowned set designer François Confino to develop the walk-through concept and integrate numerous multimedia and virtual technologies.

Sign of the times, both spaces will be interactive and entertaining. Durand defends the idea that audiences must be amused. “People need to be entertained. But at the same time, they need to walk away with something substantial.” The project is pitched at the general public and Chaplin-connoisseurs alike.

He then reminds us that Chaplin said: “My art is for the people.”

Film compilation courtesy of Cineteca di Bologna with additional thanks to the Association Chaplin in Paris.

Half-Swiss, half-Canadian Jean-Pierre Pigeon has been brought in by Grévin as director general of the entire site. His enthusiasm is also apparent as he guides the visit and reels off the additional attractions of the museum complex that will hopefully bring in even more than the 300,000 expected annual visitors.

Chaplin’s Café Restaurant will open in an existing wooden beamed farmhouse at the entrance of the property and will serve ‘Chaplin-inspired’ food in the daytime. In the evenings, it will become a semi-gourmet restaurant.

The top floor of the mansion, where the Chaplin children lived under the gabled roofs, has become a 250m2 VIP reception area up for hire.

Pigeon stresses that Chaplin’s World has been built 90% by a local workforce. And indeed the dozens of vehicles surrounding the construction site carry Vaud license plates. The museum will generate 25 jobs, not including the outsourcing for the restaurant, gardening and security.

The official opening date will be announced at the beginning of the new year.

“We aim to make Chaplin’s World one of the most important cultural venues of Switzerland,” Durand insists.

Chaplin was born on April 16, 1889 in London. He made his first appearance on stage in 1894 in a London music hall to replace his mother who had taken ill during the performance.

From a broken home, Chaplin spent many years of his early youth in a workhouse along with his brother Sydney.

He began his career as an actor on the English stage in 1903. Chaplin toured the United States as a member of the Karno troupe in 1910. Four years later, he made his first appearance in films for the Keystone Studios.

Chaplin's "Tramp" character first appeared on screen in one of his early Keystone shorts, "Kid Auto Races", in 1914. The character helped make him a leading Hollywood star. Chaplin founded United Artists together with Douglas Fairbanks, DW Griffith and Mary Pickford in 1919.

He defied the arrival of sound in films with the release of commercial and critical successes, "City Lights" (1931) and "Modern Times" (1936). In 1947, he was accused of being a communist sympathiser and left the United States for good in 1952, and settled in Switzerland.

He made his last film, "A Countess from Hong Kong", in 1966. Chaplin returned to Hollywood to receive a special Oscar in 1973. He was knighted by the Queen of England two years later. He died at his Swiss estate on December 25, 1977.

100 years on What the Tramp tells us about Charlie Chaplin

The birth 100 years ago of Charlie Chaplin’s Little Tramp is celebrated on all five continents this year. In Switzerland, where Chaplin spent the ...

Memories of Charlie Chaplin, one of the world’s most famous comedians and stars of the silver screen, will live on in western Switzerland, as work ...

Plans for the Charlie Chaplin heritage site near Vevey are back on track after receiving an interest-free loan of SFr10 million ($10.75 million) ... 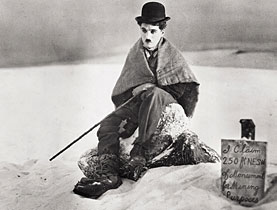