Zurich’s exclusive Bahnhofstrasse has had a Christmas lighting makeover after the previous modern design - a row of tubes along the street - flopped with the public.

“Lucy”, as the new network of twinkling LED lights is called, was switched on early Thursday evening. The first responses seem positive and there are hopes that Lucy will boost Zurich's festive image.

At 6pm the lights went on, albeit with several involuntary flickers, to a great "ooh" from the crowds lining the Bahnhofstrasse and the adjoining Paradeplatz.

"I'm very happy, I think people like it and it's the atmosphere we hoped it would bring," said Markus Hünig, chairman of the Bahnhofstrasse Association, which was behind the new lights.

His view was backed up by watching Zurich residents. "They are really lovely and romantic," Verena Korrodi said. "Much better than the neon tubes of the years before".

Visitors from abroad were also impressed. "They look like stars to me, especially when you look down the street and you see all of them at the same time," said Tom Keebler, an American air crew member on a two-day stopover.

There have been Christmas lights in the Bahnhofstrasse, the world’s fifth-most expensive retail street, since 1971. But in 2005 the street's association decided to replace the popular old version with a more modern one.

The World’s Largest Timepiece, by two young Zurich architects Fabio Gramazio and Matthias Kohler and costing SFr2.4 million ($2.4 million), consisted of a chain of 275 seven-metre-long tubular bulbs down the middle of the street. Light points in the tubes sent ripples along the length of Bahnhofstrasse.

The installation was hailed by the organisers and artistic circles, but Zurich residents and tourists found it less than illuminating.

“There were two problems which people raised: one was that the light was cool and not Christmas-like,” Hünig told swissinfo.ch.

“The other was that people could not see the movement on the light points. I always said that if people looked from a distance it would have had an entirely different effect.”

After two years of complaints it was decided to change the Timepiece, and after a competition, Lucy was chosen.

Daniele Marques, the architect in charge of the Lucy project, said the idea was to give Bahnhofstrasse a much more festive feeling and remind people of the 1970s lights.

Marques calls the design an atmospheric space, defined by very many glittering light spots. This is achieved through a canopy and strings of irregular length which drop down towards the pavement.

LEDS were used because they need relatively little electricity -- indeed Lucy needs half as much power as the World’s Largest Timepiece.

But there was a problem: LEDs also emit a cool light and in one direction only, instead of in three dimensions like light bulbs.

“We developed a crystal to put round the LEDs so that the light’s reflections can be enjoyed from all three sides. The crystals shine out the warm atmosphere that we want,” Marques told swissinfo.ch.

In all, around 12,000 clear and coloured crystals have been used for Lucy, as well as 40km of transparent cable. It is run via computer.

The whole project was funded by 28 sponsors – including big banks UBS and Credit Suisse as well as chocolatier Lindt and Sprungli – to the tune of around SFr2.5 million.

Hünig said that he expects Lucy to be in the sky – she is named after the Beatles’ song - for around ten to 20 years.

As for the old installation, Hünig says he will make an announcement in January as to its future, but buyers have so far remained switched off. It is currently in storage.

The Zurich city authorities also have great hopes for Lucy. They did not participate in the financing of the project, but as the street landowner were involved from the start.

Christine Bräm, head of design and development at the city’s civil engineering office, said Lucy was very important to the city’s image.

“We could test that through the World’s Largest Timepiece,” she said, referring to the headlines at both home and abroad that greeted the 2005 installation.

“So we hope this time that it’s going to work and that people feel emotionally attracted to it and that it will bring out Zurich’s image to the whole world."

Lighting up the street

The first Christmas lights, designed by Willi Walter and Charlotte Schmid, illuminated Bahnhofstrasse from 1971. In 2005 they were replaced by the World's Largest Timepiece.

The lights and controlling technology for the installation were manufactured by the Italian company Artemide. The crystals developed are unique to the project. The Christmas lighting project was a new departure for the high-end lighting company, explained its managing director for Switzerland, Steffen Salinger.

A subset of the Lucy team has also won a Christmas light project in Lucerne, which will use the same crystals. The lights will adorn the Seebrücke bridge.

The exclusive street is the home of luxury retail, well-known brands and banks – UBS and Credit Suisse have, for example, their headquarters at Paradeplatz at the end of the street.

It was created in 1864 following the construction of Zurich Main Station (Hauptbahnhof) in 1847.

It is 1.4 kilometres in length and connects the station to Lake Zurich.

Bahnhofstrasse was named the world’s fifth-most expensive retail street in 2010 by Location Services Research. This has proved too much for some retailers.

Swiss plan to splash out at Christmas

While most Europeans will be cutting costs this Christmas, retail studies have shown the Swiss will be spending more than last year. Swiss ... 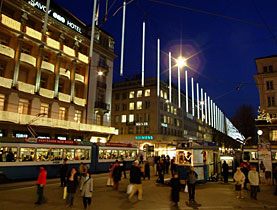 Zurich's Bahnhofstrasse is still one of the most expensive in the world for renting store space, says a study released on Wednesday. The study by ... 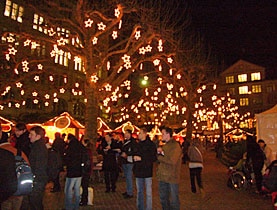 Sampling the lights and delights of Zurich

The normally calm banking centre of Zurich becomes a blaze of light and colour in December as its residents prepare to celebrate Christmas. ...

The Arbres & Lumières festival in Geneva. For the past nine years in December, trees in the centre of Geneva have been clad in lights, colours, ...