The Swiss police have announced that they will stop looking for eight people who went missing following a huge landslide near Bondo, a remote village in canton Graubünden. The victims were hikers from Germany, Austria and Switzerland.

Eight people had been swept away by the landslide on August 23 in the Val Bondasca that was made up rocks, mud and debris falling at a speed of 250km/h from Piz Cengalo. Search operations ground to a halt following a second landslide at around 16:30 on Friday. All the victims were hikers: Two Swiss, four Germans and two Austrians.

Several people who had returned to their homes after the original landslide had to be evacuated. Eyewitnesses, such as a Swiss television reporter, described how they were surprised by the incident. The mudslide smashed equipment that was being used to clear debris from the previous landslide.

Rescuers searching for eight people missing were able to leave the mountainside in time.

The mountain that crashed down on Bondo was deemed at risk after a scientific study detected weaknesses.

Rescuers used a helicopter, dogs, thermal imaging and mobile phone location devices to look for the eight hikers and climbers.

The search had been called off after nightfall on Thursday for safety reasons. Police have sealed off airspace for a five-kilometre radius until Monday to give priority access to rescuers.

One hundred inhabitants of Bondo were evacuated as a precaution and some had been allowed to return home in the course of Friday morning.

Hikers from nearby huts were also airlifted after rocks and mud hit the area. About 120 rescue workers are in the region.

The citizens of Bondo, a small village in canton Graubünden, were hit by a massive landslide on August 23, 2017.

Buildings were damaged and television images showed a trail of destruction left by a river of mud and stone after the original landslide on Wednesday.

It is believed the event was caused by a combination of thawing permafrost and water pressure dislodging rocks.

A search is underway for 8 people missing following a massive landslide in Bondo, canton Graubünden. Rocks rolled up to the entrance of the ...

The authorities were alerted by an automatic alarm system that had been set up in the region after a massive landslide in 2012 down Piz Cengalo, the source of the rocks on Wednesday.

In 2013, 60% of locals voted in favour of spending CHF4.5 million ($4.7 million) on a flood prevention project that involved relocating a campground, widening the riverbed and building a concrete wall to shield the village.

Thawing permafrost and heavy rainfall have been responsible for several fatal landslides or rockslides in recent years in Switzerland.

Thirteen people were killed by a landslide in Gondoexternal link, a small village in canton Valais near the border with Italy, in 2000. The landslide was triggered by days of torrential rainfall.

In 2003, 90 climbers had to be airlifted off the Matterhorn after an unusually large part of the mountain came tumbling down. No-one was hurt, but climbing was temporarily suspended.

In May 2006, Switzerland's main north-south road axis through the Alps – the Gotthard - was temporarily closedexternal link following a rockslide, which crushed a car killing two people.

Two months later, 400,000 cubic metres of rockexternal link fell from one of Switzerland’s most iconic mounrains – the Eiger. No-one was injured or property damaged in the incident.

Heavy rainfall was again responsible for a landslide that killed two peopleexternal link in Lugano, canton Ticino, in November 2014.

The particularly warm summer of 2015, combined with precipitation at high altitudes, resulted in a significantly higher number of rockslidesexternal link. The biggest rockslide that year happened in September when 80,000 cubic metres of rock fell in canton Valais.

In July of this year scientists warned of a heightened risk of rockslidesexternal link in the Moosfluh mountain range flanking Switzerland’s longest glacier, the Aletsch. Extra sensors have been installed after increased slippage on the mountainside was observed.

Having studied the same area, scientists at Zurich’s Federal Institute of Technology issued a reportexternal link showing a direct linkage between retreating glaciers and rockslides.

The mountain commune of Bregaglia in southern Switzerland has won the 2015 Wakker architecture prize. The idyllic valley that connects canton ...

Nouvo The fear on the mountain

What effect is global warming having on the Swiss Alps?

There are fears of a major landslide could happen above the Aletsch glacier. Extra sensors have been installed. 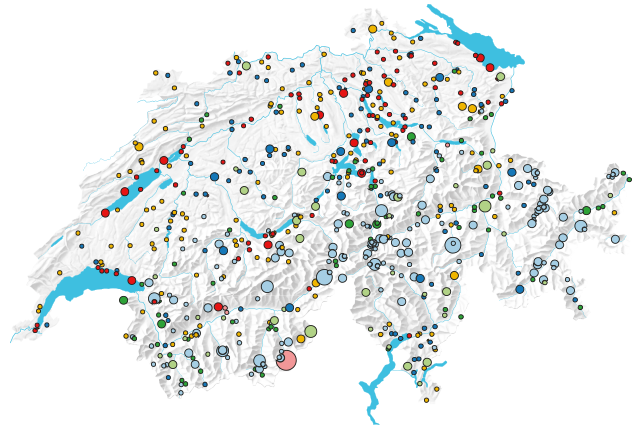