A huge slice of rock has fallen from the Eiger mountain in the Swiss Alps in a spectacular collapse that came after days of warnings from scientists.

The rock - loosened by melting glacial ice – crashed down shortly before 8pm on Thursday, blanketing the Bernese Oberland resort of Grindelwald in a cloud of dust for hours.

Rescue chief Kurt Amacher of the Swiss Alpine Club told swissinfo that about 400,000 cubic metres of stone - or 20 per cent of the endangered rock mass - had come crashing down.

The rock broke off in sections and thundered down hundreds of metres below onto the Lower Grindelwald glacier.

Grindelwald itself was never in danger from the fall, no one was injured and no buildings were hit, Amacher added. He said that the remainder of the rock could fall very soon.

The amount of fallen rock is estimated to be equal to a half of the volume of New York's Empire State Building.

Earlier on Thursday, a 30-metre high rock formation on the Eiger known as the Madonna fell as a result of the pressure.

Geologists had predicted last week that a dramatic fall was imminent because of the retreat of the glacier – blamed on global warming.

A slab had been moving away from the rock face at a rate of up to a metre a day and a fissure between the two surfaces, which was first spotted at the beginning of last month, had grown to about five metres.

Researchers at Zurich University warned on Monday that alpine glaciers would all but vanish by the end of the century if global warming were not halted.

Computer modelling experiments showed that the Alps would lose 80 per cent of the glacier cover if summer air temperatures were to rise by three degrees Celsius.

The study found that if temperatures were to rise by five degrees, the Alps would become almost completely ice-free by 2100.

Switzerland's glaciers lost 18% of their surface between 1985 and 2000. In the Alps, the average loss has been 22%.
Swiss glaciers are melting more slowly because most of them are at high altitude.
Meltdown affects smaller glaciers - which represent 18% of total glacier surface but nearly half the losses incurred – first, according to a 2004 study from Zurich University.

The Eiger at 3,970 metres above sea level is one of the most renowned mountains in Switzerland, with its north face offering a major challenge to climbers.

Thursday's fall of rock from the mountain is a further example of instability throughout the Swiss Alps.

On Monday a 70-year-old German was killed by a huge mudslide that descended from a glacier in the Corvatsch region of canton Graubünden.

At the end of May, rock fell on the main north-south road axis north of the Gotthard tunnel, killing two Germans in their car. As a result dangerous overhanging rock had to be removed and the motorway was closed for a month. 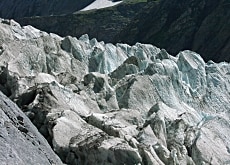 Researchers at Zurich University are forecasting that alpine glaciers will all but vanish by the end of the century if global warming is not halted. 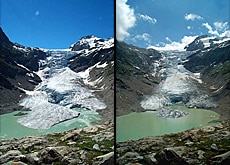 Most of Switzerland's glaciers have continued to melt away, according to the latest measurements published by the Swiss Academy of Sciences. ...

The Eiger was in a sullen mood earlier this week, not wanting any part in the opening ceremony of the "Eiger Live" mountain festival in the ...