The largest underground lake in Europe has reopened to the public three years after its future was threatened by collapsing walls.

Its resurrection is down to the faith and perseverance of local people who raised the SFr2.5 million ($1.9 million) necessary to carry out the repairs.

The lake at St Léonard in canton Valais is nearly 300 metres long, has an average width of 15 metres and remains at a constant 11 degrees Celsius.

But disaster struck almost three years ago when a two-ton boulder broke free, tumbling down and smashing one of the tourist boats.

"After that, the cantonal geologist told us the walls and roof were no longer stable and so we had to shut the cave," Jean-Marc Burgi, director of the site, told swissinfo.

The small community of St Léonard was suddenly faced with losing its only tourist attraction, which had drawn on average 100,000 visitors since it first opened to the public in 1949.

They rallied round their lake, and even though it took them more than two years, they were finally able to raise the money to pay for the repairs.

Visitors who are rowed across the still, clear water can once again marvel at the gypsum, schist and marble cave surface - as well as hundreds of iron stabilising rods that now protrude from it.

The repair work began at the beginning of this year. Before it could start, the lake was drained and a special lift built to transport construction vehicles to the bottom of the cave.

It was the second time such a large amount of water had been removed.

The lake was first explored by Swiss speleologists in 1943, but at that time there was only a 50-centimetre gap between the water surface and the top of the cave.

An earthquake measuring 5.6 on the Richter scale changed all that three years later by emptying the cave of half its contents. Water seeped out through fissures in the cave floor.

The St Léonard authorities seized the opportunity and soon approved plans for its commercial exploitation.

Now that it is back to being the tourist attraction it once was, Burgi is optimistic visitors will once again be lured to Europe's largest subterranean lake.

"It's unique. I only know of one other such lake," he says. "It's in Australia and larger than this one."

About 100 tourists at a time are rowed in long boats the length of the cave, during which time they are told about the history, mythology surrounding the cave and its geology.

The cave follows a vertical seam of gypsum, which is bounded at the northern end by clay schist and to the south by marble.

The formation of the cave is largely due to the dissolution of the gypsum, which is a very soluble rock.

The water flows into the cave from irrigation ditches running through the vineyards above ground, and from the underground water table.

It is the largest subterranean lake in Europe.
It measures on average 260 metres in length and about 15 metres in width.
The cave is made up of gypsum, schist and marble.
The rock was deemed unstable in 2000, so it was closed to the public.
Repair work has now been completed and it has reopened as a tourist attraction.
The lake is open annually to the public until the end of October (next year from March).
The boat trip lasts 40 minutes and costs SFr10.
An English commentary is provided. 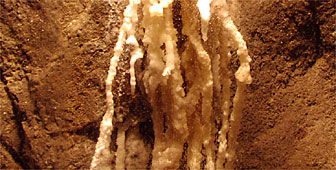 Worth one's salt - the Bex mines

The salt mines in Bex kept the population well supplied for over three centuries and were once a symbol of power and wealth. The ...