Hiltl in Zurich is the oldest vegetarian restaurant in Europe and is currently managed by the fourth generation of the same family.

When the restaurant was first opened 111 years ago, it was ridiculed. These days, it is considered a gastronomic highlight of the city on the River Limmat.

And so, Restaurant Hiltl was born. Today, it is Ambrosius's great grandchild, Rolf Hiltl, who recounts the story of the long-standing family business. He welcomes us in the restaurant's stylish dining hall. His blue eyes and blond curls are unmistakable signs of his Bavarian roots.

"My great grandfather was cured of gout in just a few months and lived to the grand old age of 93," he says. Representing the fourth generation, 40-year-old Rolf Hiltl took over the family business in 1998, exactly 100 years after Europe's first vegetarian restaurant was founded.

Over the past 100 years, the business has also had to contend with some difficult times. The 20th century was marked by its fair share of crises and wars. This resulted in cost-cutting.

"For us, however, it was perhaps not as difficult as for some. When times are hard, it's not always easy to get hold of meat – but this didn't affect us," says the current owner.

The relatively small variety of vegetarian ingredients that were available to the Hiltl family several decades ago encouraged them to remain innovative and creative with their food. In those days, supplies included little more than eggs, flour, potatoes, grain and a few vegetables.

Thanks to this creativity, the restaurant was able to make a name for itself and survive the difficult post-war years at a time when meat became an almost integral part of the Swiss diet.

For a long time, vegetarian cuisine lived a shadow existence. Only in the 1970s did it first enjoy popularity when young people in particular developed new sensitivities to nature conservation and animal welfare. Interest in far-away cultures such as India, the birthplace of vegetarian cuisine, also emerged.

"Globalisation was very good for vegetarianism. We were able to discover cultures with far more diverse vegetarian dishes than our own.

"Take, for example, India, China or Malaysia, and also Mediterranean cuisine," Hiltl says. He travels extensively every year to find new recipes around the world. The business employs people from 40 different countries.

Over the years, the Hiltl restaurant has transformed from a "Vegetarians' Home and Teetotallers' Café" into a gourmet temple.

The restaurant not only attracts strict vegetarians but also part-time ones – like the boss himself. For every now and again, Rolf Hiltl treats himself to some meat.

"A large number of the early vegetarians were dreamers who wanted to create paradise on Earth. Today, health consciousness and ecological awareness are the primary motivations.

"When the newspapers broke the news of mad cow disease a few years ago, people were queuing up at our restaurant", recalls Hiltl.

Ambrosius Hiltl would certainly be very surprised if he could see his restaurant on the Sihlstrasse today. It was completely refurbished in 2006.

Visited by 1,500 people a day, the Hiltl business now includes not only the restaurant but also a bar, a disco and a cookery school.

Hiltl has become an icon in Zurich and can be found in every city guide. Its guests include celebrities such as Paul McCartney and Marc Forster.

Motivated by success, Rolf Hiltl founded a chain of vegetarian fast food restaurants together with the Frei brothers. Trading under the name Tibits by Hiltl, they have already opened four outlets in Switzerland and one in London since 2000.

"What I particularly like about my work is that I can make my customers happy without hurting a single animal," says Hiltl.

"Since 1898 we have served around 40 million dishes. Imagine how many animals would have had to die if each dish had contained even just 100 grams of meat."

The first evidence of a vegetarian diet comes in ancient philosophical and religious texts, particularly from Greece and India.

Historical figures who have been vegetarians include Leonardo Da Vinci, Voltaire, Tolstoy and Einstein.

A vegetarian culture started developing In Europe from the middle of the 19th century. Various national vegetarian societies were founded at that time.

In 1908 the International Vegetarian Union was founded in Dresden as the umbrella organisation for all the national societies.

According to the Swiss Vegetarian Association, between two and three per cent of Swiss are vegetarians. 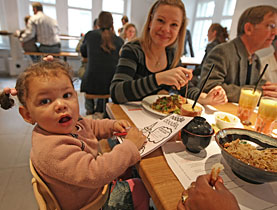 A trendy Asian noodle chain from Britain is hoping to cash in on a growing demand for quality fast food in Switzerland by opening its first ... 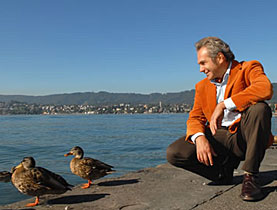 Lawyer lends his voice to the animals

Antoine Goetschel's job as animal welfare attorney in Zurich is not only unique in Switzerland – it's also a worldwide first. Zurich's pioneering ... 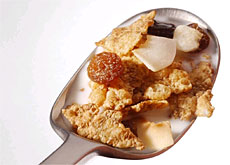 It is 100 years since Swiss doctor Maximilian Bircher-Benner opened a sanatorium in Zurich serving up a special dish of fruit, milk and nuts to ...

The historic vegetarian restaurant in Zurich from its beginnings until today. The Haus Hiltl, which opened in 1898 is Europe's oldest vegetarian ... 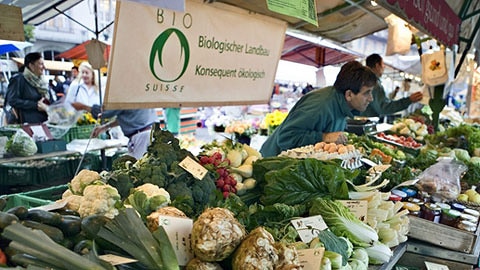 The Swiss are champions at buying organic products. The Swiss spend more on organic food than any other nationality, but consumer enthusiasm is ...