Five young musicians at Zurich University of the Arts earned their Masters diploma in pop music, the first to graduate in the discipline.

The young students – four men and a woman – hope to turn their talents into careers.

For 25-year-old Mara Miccichè from Zurich, pop music is anything that isn’t classical or jazz. “Pop has many facets. What particularly interests me is the independent area, which is continually growing and thanks to the internet allows networking outside the country.”

Miccichè has played the piano since she was four and she also plays the guitar. Her “main instrument” though is the voice – music is her main form of expression.

She began her studies at the university as one of the first five on the course of studies in pop music, and in mid-June she will become the first woman with a Masters in pop.

She has learned a great deal in the past five years – not least about herself.

“It was an exciting experience and I tried out a lot. Before, I had an indie rock band but now I’ve become more experimental,” she told swissinfo.ch. She now feels she’s on her way to finding her own style.

The singer describes her first two years at the university as very intensive with many exams and a lot of theory: harmonics, ear training, music history, teaching with instruments, as well as pop styles and pop history workshops, from the 1950s to today.

From the third year, when they get the bachelor’s degree, the young musicians can for the most part fashion the teaching according to their own interests.

A class, all of the same age, consists of five people who study either singing, keyboards, guitar, bass or drums. In this way, they can form a band which can experiment in workshops and gain experience.

Those wishing to study pop music at the university have to go through an entrance examination.

“We are looking for musicians who have already given concerts, written songs, have been in a studio and now want to seize the opportunity to make a career,” says Heiko Freund, who is head of the pop department at the university.

The aim of the course is for those who gain the diploma to later be able to earn a living from pop music.

“I tell my students that we give them a set of tools that will allow them to take up different jobs in pop music,” Freund adds.

There is not only the singer on the stage but people behind the scenes: the songwriter, the guitar players in the studio, the sound engineer – all professionals who make a living doing this.

“We don’t make future pop stars as they do in casting shows.”

The course stems from the Bologna reform at the beginning of the millennium. In 2004 guitarist and music teacher Freund received a mandate to do a feasibility study.

"We bring together young like-minded people who have the same talent and spice it up with a few people like my teachers and myself, who have been in professional work for a long time.”

It’s more a kind of coaching than old-fashioned teaching, he said. “What we offer is the opposite of  restrictive and the environment is stimulating.”

He explained that if you bring a few talented people together in a room, there’s enough critical mass to spark things off.

“Sometimes I notice that I’m not even needed in the room. Then I leave and come the following week to see what has happened,” Freund says.

It’s exactly this kind of freedom with no restrictions that Miccichè appreciated. “Otherwise I could not have made it,” she says.

She also enjoyed the family atmosphere at the university.

“You get to know many fascinating people from various areas of music and there are new combinations and synergies that can create something new,” she says.

Miccichè is a great fan of Icelandic singer Björk, but she doesn’t just confine herself to pop music. She sings her own compositions, until now mainly in English.

Her Masters project is called Iokoi (see link). She wants to continue this after she’s received her diploma. She also hopes to go on stage in Italy, where she travels often, as well as Switzerland and other countries.

“You’re not looking for perfection when you sing. Anyone can sing and everyone has his or her own distinctive voice. You can work a lot on technique but in the end you have to have the courage to do something of your own – uninhibited, without thinking about it too much and you have to be curious,” Miccichè says.

After her Master's degree she would like to teach music, otherwise do temporary work and hopefully play concerts.

“I feel an inner urge to take my project out into the world because live energy is something indescribably wonderful.”

Education in pop music at the Zurich University of the Arts is unique in Switzerland. A similar course is offered in the German city of Mannheim.

The course has existed since the autumn of 2006 and stems from the Bologna study reform.

It lasts five years, three for the bachelor’s degree and a further two to gain the Masters diploma.

The classes each contain five students, who together form a band. One person has one instrument. There’s a singer, someone who plays on keyboard, a guitarist, a bass player and a drummer.

From the third year the musicians can more or less choose what they want to do.

At the end of the Masters programme there is a file about their projects, a CD/DVD production and a farewell concert.

The university aims to educate career musicians who can earn a living from what they have learned.

In the pop department, there are mainly young people from the German-speaking part of Switzerland. Women are rare, particularly when it comes to playing a musical instrument.

The pop music department at the Zurich University of the Arts is led by guitarist and music teacher Heiko Freund.

She was born in 1985 and grew up in Zurich. Her mother tongue is Italian.

After her graduation, she studied for a term at university, went travelling and began her studies in pop music at the Zurich University of the Arts in autumn 2006.

She has played in various bands. Her instrument is her voice but she also plays the piano and guitar.

After ending her master studies, she wants to live partly in Switzerland and partly in Italy, and perform in concerts.

Despite being outwitted by an online pirate, the organisers of the 45th Montreux Jazz Festival were all smiles at this week's launch of the ...

By Bernard Lechot in Zermatt

Unique live concert footage spanning the entire 44-year history of the Montreux Jazz Festival has been saved for future generations under a new ...

By Simon Bradley in Caux 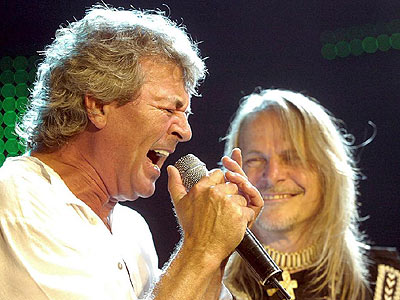 Deep Purple "smoke" on the water at Montreux

The 40th Montreux Jazz Festival ended on Saturday with a concert by Deep Purple. Lead singer Ian Gillan told swissinfo ahead of the gig what it ...

Swiss photographer Hannes Schmid opens up his musical "family album". In Rockstars, the internationally renowned artist presents the best of his ...