Nothing archetypally Alpine – cowbells, alphorns or any form of cheese – stands out in the contemporary art centre's smart, minimalist environment.

At the moment, the only thing noticeably Swiss in Manhattan's downtown quarter might be the 21-year-old Institute's name and perhaps some European-sounding accents resonating off the wooden floorboards on a quiet day.

Some of the country's most notable artists have indeed been shown here, including sculptor Alberto Giacometti and mixed media artist Dieter Roth, who worked in chocolate.

Nevertheless, as the country's diplomatic officials explain it, to be Swiss these days is not necessarily to be traditionally Swiss, but rather international and outward looking. For a city like New York, the Institute is a fashionable complement to the staid world of diplomacy.

"Culture is business and business dominates New York," Gabriela Eigensatz, the Swiss cultural attaché and an Institute board member, told swissinfo. "But then, culture is also in everyday life. People are very open to culture, they want to enjoy it."

Gianni Jetzer, the Institute's director for the past 18 months, explains why the Swiss cultural centre has such a cosmopolitan focus.

"National identity is a very twisted subject nowadays," he mused. "Contemporary art is a minority thing to a certain extent. It is a lot about finding new languages and ways of communication, of thinking about the world in general... a very Swiss thing."

"We are Swiss, but we have also been New Yorkers for the past 21 years," he says. For him, the prerequisite for any aspiring artist is talent, not nationality.

For a contemporary art centre with a small budget in a city brimming with venerable cultural establishments, the Swiss Institute attracts its fair share of media coverage.

This year's exhibitions have won praise from many of the city's most influential critics. In March, the New York Times declared the institute's Dark Fair to have "the most buzz this year".

"We have a lot of reviews for the shows. Every show more or less gets reviewed in the bigger newspapers."

Jetzer thumbs through a binder of newspaper clippings. "That was Daniele Buetti's show in the New York Times... This show with Tom Burr was called 'Good news for people who like bad news'. That was New York magazine..."

The project began modestly in 1986, when it occupied two mid-town rooms and was staffed by volunteers. Four years later, it began receiving funding from the Swiss government.

During the mid-1990s, the Institute saw a significant rise in corporate contributions, and it also continued moving beyond its niche roots – art by the Swiss, for the Swiss.

Indeed, the contemporary exhibitions may boast somewhat of a broader appeal than two decades ago, but Jetzer draws the line between modernity and the mainstream. He says art doesn't need to be prosaic – dumbed down – to be popular; nor will it be.

Part of the point is to support new ideas and emerging artists – to "keep the freshness and innovation of the product" – and to serve as an incubator for new talent. He refers to the Institute as an art "think tank".

The address on New York's legendary Broadway Avenue is home to a small and international staff. Jetzer is Swiss, but the assistant curator is a 23-year-old from the United States, the gallery manager is Estonian and someone else hails from Luxembourg.

At present, they are managing two shows; one by Canadian Ryan Foerster (Jetzer calls him a "post-minimal punk") includes a giant cheque, a piece of shimmery cloth and bundles of self-produced flyers positioned on the floor. "It asks for artistic presence without being loud," Jetzer explained.

Semi-transparent black window coverings dampen the light and make it look as though it might rain. With the windows open, they do little to mask the sounds and smells that are unmistakably New York.

Do people know they're not supposed to stand on that fabric on the floor? "Usually, yes," he said.

Two doorways and a right turn away is a larger space. It is dominated by a massive, stealth bomber-like wooden sculpture. "It explodes the architecture of the site," Jetzer said. The piece, Untitled, was created by the nomadic Swiss duo Gregory and Cyril Chapuisat, and appears as though it crashed into the building.

It and six other pieces are part of a group show called the Why of Life. Jetzer says the pieces explore life and death from the philosophical proposition known as determinism.

"I wanted it to reflect those moments we all have in life when you look on maybe the surface of the water or look into the sky and you think everything is so beautiful and big, but at once, you feel how small and vulnerable and unimportant your existence is," Jetzer said. "And I wanted to meet that point. So much is just pure coincidence."

The theme is thought provoking and at the same time accessible. "The show has to make sense on a very first degree, visual level. You should be able to question the shows and the artwork and get into it. It should be entertaining and enriching, visually, without knowing," he said.

It also defies an often self-absorbed and aggressive Wall Street culture, a point Jetzer acknowledges and embraces. "It tries to slow down the whole crazy process of New York City."

The Swiss Institute was founded in 1986 and portrays itself as an "independent, not-for-profit" organisation. Originally, it occupied two living rooms in mid-town Manhattan and has been on Broadway Avenue since 2004.

It is not affiliated to the Swiss government, but receives 45 per cent of its funding from the Swiss Arts Council, Pro Helvetia. The remainder comes from private donations.

It describes its mission as fostering a dialogue between Switzerland, Europe and the United States, and claims to present "a distinctive view of art and a way of thinking which asks audiences to break with traditional assumptions about art and national stereotypes".

Gianni Jetzer was formerly the curator of the contemporary art museum in St Gallen and of the Migros Museum for Contemporary Art in Zurich.

His vision for the Swiss Institute is to reach beyond the city's art scene, in which it is well known, and says there is a sizable community interested in contemporary culture – but not necessarily in contemporary art – that the institute could tap into.

He says that would require a marketing budget that doesn't really exist.

Instead, Jetzer has resorted to other, more imaginative means. During the Why of Life's run, the Institute has been hosting yoga sessions twice a week. It lets people experience the art in a different way, he says. 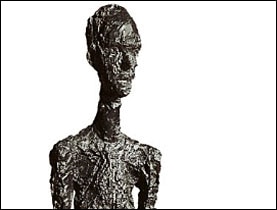 Sculptor Alberto Giacometti has retained his title as the most expensive Swiss artist after one of his pieces fetched a record price at a New York ... 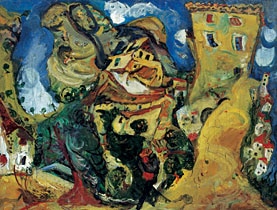 The visionary painting of an agonised soul

Chaim Soutine, a Belarussian Jewish painter whose bold works reveal deep emotion and turmoil, is the subject of a special exhibition at Basel's ... 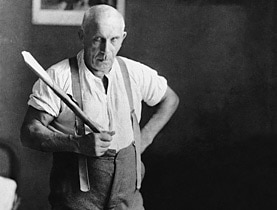 Portrait of the madman as an artist

An exhibition at Bern's Fine Arts Museum is showing the work of a convicted paedophile and schizophrenic, Adolf Wölfli, who started drawing as a ...

Lighting up the art world