Researchers at the federal technology institute ETH Zurich have discovered that natural weather phenomena and weaker solar radiance are responsible for the hiatus in global warming that has been occurring since 1998. But they warn that the overall warming pattern is slated to continue.

The study, published in the journal Nature Geoscience, corrects calculated climate models for the warming and cooling influences of the La Nina and El Nino weather patterns as well as for solar cycles, which dictate how much solar radiation reaches Earth. Researchers found that events like the eruption of the Icelandic volcano Eyjafjallajökull in 2010, as well as a longer-than-normal weak solar cycle and dueling La Nina and El Nino influences, made the period from 1998 to the present day cooler than expected on Earth.

However, the ETH team also says the so-called “warming hiatus” is just temporary.

“Short-term climate fluctuations can easily be explained. They do not alter the fact that the climate will become considerably warmer in the long term as a result of greenhouse gas emissions,” says Reto Knutti, study co-author and Professor of Climate Physics at ETH Zurich. As soon as weather and solar patterns return to the values from previous decades, he expects the overall warming trend to continue.

Knutti attributes the discrepancy between scientific climate models and measured climate data to the way measurements are interpreted. For example, he points out that such data is only gathered from weather stations on Earth’s surface, which are not present in all areas and are especially lacking in uninhabited areas like the Arctic, which have experienced significant warming trends and ice melts.

Planet’s future Expert says climate change is up to us

The best way to manage climate change is to have a target, says renowned climate physicist Thomas Stocker. He warns that mankind must adapt while ...

By Gaby Ochsenbein and Luigi Jorio

Thanks to the purchase of millions of emissions reduction certificates in foreign countries, Switzerland has managed to meet its goals under the ... 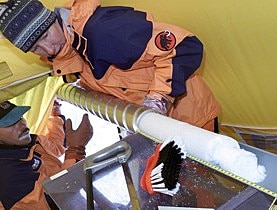 Global climate change progressed faster in the 20th century than at any other time during the past 22,000 years, warn Swiss scientists. Their ...