A stone relief that turned up in Geneva in 2014 having been stolen from the Nile Delta some 30 years ago will soon be returned to Egypt.

“During an inventory check of the Geneva free port at the end of 2014, the Federal Customs Administration identified … a granite relief of unknown origin and informed the Geneva public prosecutor, who opened a criminal inquiry,” the Geneva cantonal prosecutor said on Monday.

After an examination by Philippe Collombert, professor of Egyptology at the University of Geneva, the inquiry said the stele – an upright stone slab – came from the temple of Behbeit El Hagar, next to the city of Mansoura on the east bank of the Damietta branch of the Nile.

The Geneva authorities added that a comparison of pictures taken on the site in the 1970s by French archaeologist Christine Favard Meeks with photos taken more recently had “established beyond doubt that the granite relief had been stolen from the site”.

The stele will be handed over to the Egyptian authorities in the near future by the person responsible for cultural goods at the Federal Office of Police.

Originally, free ports were designed to temporarily store commodities and later manufactured goods in transit, but they are increasingly used as permanent homes by investors and collectors.

Free ports The discreet bunkers of the super-rich

The wealthy are increasingly investing in art and other treasures stashed in free ports which offer discretion, high security and tax benefits.

In 2013, the Geneva free port, whose warehouses offer floor space equivalent to 22 football pitches, held around 1.2 million artworks. It also houses the world’s biggest wine cellar, according to its directors. Around three million bottles of vintage wine, mostly from Bordeaux, are sitting in wooden cases in the vaults of the building, slowly maturing at an ideal temperature and gaining interest for their owners.

The “free” aspect of free ports refers to the suspension of customs duties and taxes. Goods may be kept there for an unlimited period of time and at minimal expense. A painting can be flown in to Geneva and kept at the warehouse for years without having to pay a levy. While goods are stored at free ports, owners pay no import taxes or duties until such time as the goods reach their final destination. If the work is sold at the free port, the owner pays no transaction tax either.

In the past, investigations have led to Swiss free ports. In 1995 it was discovered that Geneva’s free port was a haven for an international network of looted antiquities linked to the Getty Museum in Los Angeles. In 2003, Swiss customs discovered 200 stolen ancient Egyptian treasures, including two mummies, at Geneva’s free port. They were returned to Egypt.

Following these scandals Switzerland moved to clean up its free ports and tightened laws on money-laundering and the transfer of cultural property. Free ports became subject to the same regulations that guide all imports, with the obligation to declare ownership, origin and value for all goods imported. Since 2009, a complete inventory is also required.

But cases still arise. In 2010, a Roman sarcophagus was discovered by Swiss customs officers in Geneva’s free port. There are allegations that it might have been plundered from a site in southern Turkey.

Free port problem Closing in on the archaeological underworld

Switzerland has been cleaning up its free ports after a 1995 scandal on its home turf triggered a probe into looted antiquities. Globally, the ...

What goes through an archaeologist’s mind when they see historic sites being blown up or demolished?

Switzerland has returned 32 cultural treasures dating from the Pharaonic and Roman periods to the Egyptian Embassy in Bern. 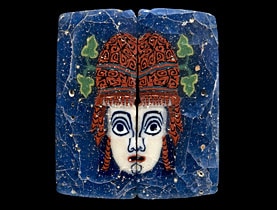 From cakes to mosaics

Achille Groppi was a Swiss coffee house owner in Cairo with an eye for both mouth-watering confectionery and sparkling Egyptian antiquities. For ...