On the occasion of its 75th anniversary, the Swiss Broadcasting Corporation (SBC) has defended its online strategy in the face of protests from publishers.

The SBC said its multimedia websites added value to its radio and television programmes and were helping the corporation retain its competitive edge.

In a speech to mark the anniversary on Friday, the director-general of the SBC, Armin Walpen, said in the digital age it was essential to provide the public with more than just radio and television programmes.

The SBC internet strategy has proved controversial, with commercial publishers complaining that they should not have to compete with publicly-funded web services for advertising and sponsorship.

They have already lodged a complaint with the federal regulator about a news internet portal run by SBC's German-language television channel.

However, Walpen said the public broadcaster was not vying with commercial websites.

He said the corporation, swissinfo's parent company, would not carry advertisements on its sites, but he added that it could not do without sponsoring for its internet services.

The public broadcaster announced last year spending cuts worth SFr80 million by 2010 to make up for lower income and planned investments.

Parliament is due to approve legal amendments that would give a bigger share of public licence fees to private radio and television stations.

Walpen had announced in 2005 that an unspecified number of jobs would also be axed, partly through natural wastage.

But initial plans to cut swissinfo to the bone were abandoned following opposition in parliament and by the Swiss expatriate community.

The Swiss Broadcasting Corporation (SBC) consists of seven units in the German, French, Italian and Romansh language regions of the country.

It is mainly funded through public licence fees, but also through advertising on television and sponsoring.

SBC is planning to mark its 75th anniversary with a series of broadcasts on its history and boost its role in education projects.

SBC posted a SFr1 million deficit ($0.8 million) and turnover of SFr1.5 billion in 2005.
It has a workforce equivalent to 4,660 fulltime positions.
SBC was founded in 1931, but the first public radio station was set up in the city of Lausanne in 1931. 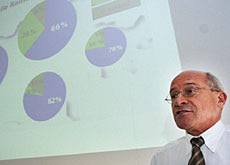 The Swiss Broadcasting Corporation (SBC) has announced plans to cut spending and axe an unspecified number of jobs from 2007. The country’s ...

SRI reflects on 70 years of history