A new photographic exhibition on display at the Vatican museum, ‘Life of a Swiss Guard’, reveals the most photographed military corps in the world in a new light, away from the uniforms and flags.

Following the example set by Pope Francis in his desire for a more open Church, the Swiss Guard has opened its most private moments to the world through the lens of photographer Fabio Mantegna. The exhibition exposes the private life of the guards behind the Vatican walls – a life rarely seen by the public.

“The photographs reveal a noble and ancient lifestyle, but also the youth of a group of boys in the service of the pope,” says Vatican museum director Antonio Paolucci.

The exhibition depicts the daily routine of these young men.

“We don’t want to be superheroes, nor be called the guardian angels of the pope; we want to carry out our service in silence, with devotion and humility,” said Swiss Guard Commander Christoph Graf at the unveiling of the exhibition.

“It’s not a normal military service. It’s a service to the pope, for the Church and you must love both,” Graf tells swissinfo.ch.

The Swiss Guard’s work is even more demanding when it comes to protecting someone like Pope Francis, who is opposed to rigid protocols.

“It is always interesting to serve him. He does not always follow protocol. It’s true that for security, it’s sometimes an added difficulty, but we’re used to it and it’s a good thing,” says Graf. “He needs his freedom. I believe he very much appreciates it and we want to guarantee it for him. At the same time, we are responsible for his security and we need to be watchful on all fronts.”

It’s a delicate and complex mission, especially during these times of heightened terrorist threats.

“I speak as a representative of the Guard and it is obvious that our eyes are not closed to these threats,” says Sergeant Urs Breitenmoser, spokesman for the Swiss Guard. “These situations that we see are very difficult for us. The pope condemns violence; he wants closer relations with the other religions. We see that it is possible to live together in a peaceful manner – the religions side by side – and we believe in it.”

The faithful The Swiss soldiers guarding the pope

May 6 is probably the most important day of the year for a Swiss Guard. This is when new recruits swear an oath to Pope Francis and his successors ...

At the salute of the Swiss Guard, Pope Francis responds with a nod or a shake of the hand. The more relaxed military relations and the possibility to speak directly with him have created a strong sense of trust between the heir to Saint Peter’s throne and his army.

The images chosen for the exhibition immortalise these moments of great humanity and, of course, of the comradery amongst the pope’s soldiers.

Many of the photos are snapshots of leisure moments, rest times and also of training and ceremonies. In one particularly poignant image, photographer Fabio Mantegna has captured Graf’s son putting on his father’s helmet.

“I photographed the son playing with his father’s helmet, smiling and admiring it, and generally very happy,” says Mantegna. “I imagine that, for a child, seeing his father dressed as a commander is very impressive. It’s one of my favourite photos.”

The final result surprised even the members of the Guard, as they almost never see the photos taken by tourists.

“It’s a work about our routine. When we see these photos, we can say to ourselves that it’s lovely to see to what point our work is rich and varied; full of beautiful moments,” says Breitenmoser, who has been a Guard for nearly 20 years.

Other images show the Italian lessons, the smiles at the French chefs in the dining hall, the chatter of the cadets during their free time in the Vatican gardens.

The Guards were the first visitors to the exhibition. Some of them are pictured several times, as is the case of Benjamin Croiser, from Gimel in canton Vaud.

“These photos have an interesting point of view because they show the work in a world of art, history and silence. Before coming here, I thought a Guard was somebody very severe in his manner, as we see them in the churches,” says 23-year-old Croiser.

The silence, emptiness and solitude are the abstract elements that feature in Mantegna’s photographs. The interminable corridors and endless staircases guarded by immobile sentinels.

“We wouldn’t say it, but to stand for six hours, even if it’s not a surveillance activity, is very tiring,” says Breitenmoser. “We work for six days followed by three days of reserve and rest. If the pope has nothing planned during these three days, the guard can go out and visit Italy or return to Switzerland. Today, it’s better than it was in my day.”

The transformation from total solitude to the swell of the masses in Saint Peter’s Square sometimes takes just a matter of minutes. The Swiss Guard receives psychology courses to help them learn how to deal with the public masses.

“It calls for significant mental flexibility and we need to prepare ourselves, look after our physical health, sleep well,” says Breitenmoser, who in one image is pictured in front of the pope-mobile in Saint Peter’s Square.

When a young cook from Zurich chose to follow in his father’s footsteps and join the Swiss Guard, he didn’t expect the Vatican to propose a ...

Changing of the guard Swiss Guard has a new leader

Pope Francis has promoted the No. 2 officer in the Swiss Guard to head the elite unit of soldiers tasked with his protection. The previous ...

The pontiff has quashed rumours that he dismissed the commandant of the Vatican’s Swiss Guard for being too strict.

Swiss Interior Minister Alain Berset shakes hands with Pope Francis in St Peter’s Square on May 6, the traditional day when new members of the ...

Thirty new Swiss Guards were sworn in on Tuesday in a special ceremony at the Vatican, pledging their allegiance to Pope Francis and promising to ...

The Swiss Papal Guards have marked the ofiicial resignation of Pope Benedict after seven years in office. In a symbolic gesture, the sentry ... 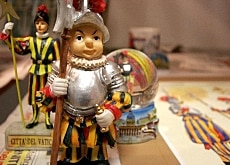 Foreign Minister Micheline Calmy-Rey has inaugurated the first Swiss museum of the Papal Guards in the southern town of Naters. Calmy-Rey hailed ...