Heidi, Leonhard Euler, and Henri Dunant are famous Swiss, so famous that you can find their names literally hurtling through space, attached to asteroids.

A so-called minor planet has now been named after a Swiss village near Zurich. Wiesendangen is the home of the amateur astronomer who discovered the lump of rock somewhere between Mars and Jupiter.

Markus Griesser first identified the asteroid in 2004 using a telescope at the local observatory in Winterthur. The celestial body, which is about one kilometre in diameter, takes around 3.6 years to travel around the sun at a speed of 84,000 kilometres per hour.

Griesser suggested naming it after his village, an idea a committee of the International Astronomical Union recently took on board.

In fact, it has become harder to find new asteroids since 1990 according to Thomas Schildknecht of Bern University's astronomy institute.

"Most of the big ones between Mars and Jupiter, where they are most common, had been found by then," he told swissinfo.

"Anything large that is undiscovered will usually be much further away, beyond Neptune, and that requires more powerful telescopes and automatic scanning systems."

Finding an asteroid that is deeper in space also requires patience nowadays. Astronomers often have to compare pictures taken days apart to see if an object has moved.

Just how many of these minor planets have been found by Swiss is not known. But the Bern astronomy institute has racked up 120 on its own, many of them thanks to Paul Wild, who even has his name linked to a comet.

Besides Heidi, Euler the mathematician and Dunant the founder of the Red Cross, there are many other Swiss names out in space. Those of astronaut Claude Nicollier, physicist Albert Einstein, philosopher Jean-Jacques Rousseau, hermit Nicholas of Flüe and composer Arthur Honegger are among the others.

Swiss towns and cities such as Lausanne, Basel and Lugano have also been honoured in this way. The mayor of Wiesendangen confirmed he was pleased to be joining this company.

Specialists say Griess' discovery of a small object is rare occurrence since it was made with a small telescope. However Schildknecht says that Swiss amateur astronomers certainly contribute a lot of potential sightings.

"The Swiss public is also very interested in astronomy, " he added. "Thousands of people visit public observatories each year."

Schildknecht says this interest is not really reflected by the state of professional astronomy in Switzerland.

"There are few scientists actually working in this field," he said, adding that the public does not realise that much astronomy has little to do with peering through a telescope.

What people often want to know, he says, is if an asteroid can destroy us as it crosses the Earth's orbit.

"It would be a big catastrophe," Schildknecht admits. "But the law of averages shows that you are a lot more likely to be killed crossing the street than by an asteroid impact."

There are more than 20 public observatories in Switzerland, as well as privately owned ones.

There are also astronomy institutes in Basel, Bern, Zurich and Geneva.

Asteroids, also called minor planets or planetoids, are a class of astronomical objects.

The term is generally used to describe celestial bodies that drift in the solar system in orbit around the Sun.

Hundreds of thousands of asteroids have been discovered within the solar system and the present rate of discovery is about 5,000 per month.

From a total of nearly 370,000 registered minor planets, over 150,000 have distinguishable orbits allowing them to be given permanent official numbers by the International Astronomical Union.

Of these, 13,627 have official names, including one called Mr. Spock. 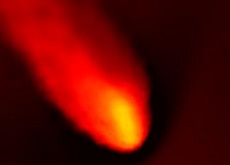 Scientists at Zurich University and the Federal Institute of Technology claim to have discovered the origins of some of the universe's darkest ...

Discovery could help in hunt for alien life

A Swiss-led team of scientists has detected a new planetary system, consisting of three planets, outside our solar system. The findings, which ...

The space probe Stardust has returned to earth after a seven-year journey to collect dust particles from the comet Wild 2. The comet was named ...