When the Cold War thawed, many of Switzerland's underground military bunkers underwent a radical transformation.

Some are now owned privately and serve as high-security data storage centres for banks or other financial organisations or as vaults or even hotels.

Neighbours – everybody needs good ones – but the receding threat of invasion has left Switzerland with a problem: what to do with all their underground bunkers? Most are no longer secret, and the few that are still supposed to be can be located within a few mouse clicks.

The coordinates of the "K20 central compound", a SFr259 million ($235 million) bunker of all bunkers - used as a command centre during times of war by the Swiss government - has been published several times in Swiss and foreign media.

Swiss military justice is usually swift to act when journalists reveal the locations of the country's underground hideaways.

In 2003 a reporter for the Weltwoche weekly magazine was taken to court after he mentioned the approximate site of a secret bunker belonging to the Bern cantonal government. He was acquitted but had to pay a SFr400 fine.

In 2005 a Basler Zeitung newspaper reporter was fined SFr700 for disclosing the whereabouts of a local government's bunker.

"What's visible from the outside can be photographed and discussed; what isn't, can't," said Hansruedi Moser, head of information at the federal chancellery.

But not everyone keeps to these guidelines. It is known for example that the control centre of the World Economic Forum is situated deep in the Davos mountainside, in eastern Switzerland.

The private sector has since discovered that these "demobbed" bunkers can be a good investment.

For example Siag, "the leading Swiss solutions provider of secure management for digital information", has two high-security data centres in the Swiss Alps.

"We rent the bunker long-term from the government or enter into joint ownership," Christoph Oschwald from Siag told swissinfo.

The firm Swiss Data Safe (SDS) offers its customers "protection in prehistoric rocks" in a former government bunker in the bowels of the central Swiss canton of Uri.

How does one get access to a former government bunker? SDS managing director Dolf Wipfli doesn't beat about the bush: "We bought it."

Do the authorities keep an especially close eye on firms that run bunkers? "As a private company, we comply with the existing laws. Beyond that, there are no additional controls," Wipfli said.

Bunkers also have their other uses. La Claustra is a four-star hotel in the Gotthard mountain range. Nothing unusual about that, you might think, except that La Claustra is a converted artillery stronghold.

Jean Odermatt, an artist and sociologist, had the idea years ago of creating a cloister-like hotel in a mountain that offered conference halls, comfortable rooms and upmarket cuisine – all 2,500 metres above sea level.

A key part of Switzerland's Second World War defence strategy has given rise to a place of relaxation, reflection and realisation.

"Our guests include people who want to wander around the Gotthard range, but also businesspeople who want to give their colleagues courses in a special environment or come up with new strategies inside a mountain," said hotel manager Jenny Hutter.

swissinfo, based on an article in German by Erwin Dettling

Before and during the Second World War, Switzerland's main goal was to preserve its independence and to stay out of the fighting.

To face the threat of invasion Switzerland increased the training of recruits and built defence works. Reserves were called up to guard the border with Germany.

The population were told to stockpile food and given instructions about how to prepare for air raids. Every available piece of land was dug up for planting crops to ensure food supplies.

The Nazis aimed to destroy the Swiss army and invade the central part of Switzerland, which was important for strategic and economic reasons. The plan was never carried out.

The first important bunker was built in Switzerland in 1886, not long after the opening of the Gotthard railway.

In 1937 a growing threat of war created the need for more fortifications. General Henri Guisan oversaw the construction of central fortified defence structures in the Swiss Alps, the so-called Réduit.

By the end of the war in 1945 the Swiss government had spent an estimated SFr8 billion by today's prices on bunkers.

As a result of various army reforms, since 1995 most strongholds and bunkers have been vacated and their secrecy has been lifted. But a few are still active. 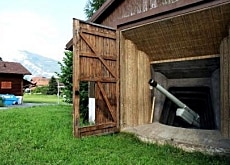 As the Swiss army continues to undergo sweeping reforms, more and more of its rich past is going on public display. swissinfo’s journey begins at ... 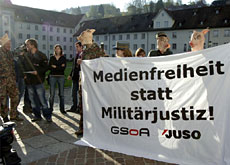 A military court has acquitted three Swiss journalists of publishing a leaked document that was intercepted by the Swiss intelligence service. ... 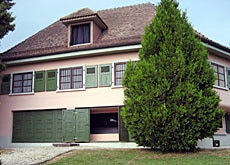 For years the mysterious pink family house on the former Geneva-to-Lausanne main road puzzled locals – never any lights in the windows or cars on ...