A report has found serious deficits in the measures in buildings to protect people from the effects of radon, a naturally-occurring radioactive gas, Swiss public television SRF reported on Friday.

Every year around 200-300 people die from lung cancer linked to radon exposure, the Federal Office of Public Health says.

Eight years ago the federal authorities launched an action planexternal link against the gas, which runs out this year. It was aimed at increasing the number of radon measurements taken in buildings and ensuring that remediation (decontamination) were carried out if needed.

Radon is produced by the radioactive decay of uranium, which is present in small quantities in soils and rocks around the world. Some places in have higher levels of the gasexternal link than others. The gas can occasionally seep into people’s homes undetected from the ground, as it is colourless and odourless.

But a recent report commissioned by the federal office shows that many measures outlined in the plan had not been carried out satisfactorily.

“We are not where we want to be. We have a clear need for action,” Daniel Storch, head of the public health section Radiological Risks, told SRFexternal link.

Radon measuring had only been carried out in 6% of buildings in Switzerland and it was not possible to tell how many buildings had been remediated, as there was no data, the report found.

Storch said a review of the situation was needed. At present radon measurements are carried out by experts and put into a database, but there is no requirement to do this when a building is remediated. That’s why the authorities want to ensure that data is recorded all along the process, from measuring to post-remediation.

Since 2018 it has been a requirement for buildings with radon levels above a certain thresholdexternal link to be remediated.  But only around a fifth of buildings affected have actually had work done on them, the cantons estimate. From this year every new building project is required to check that radon regulations have been followed, SRF reported. But only three cantons are putting this into practice, with a further eight planning to (there are 26 cantons).

The Federal Office of Public Health is drawing up an improved action plan, which takes note of the points in the report, to run from next year until 2030. The new plan will be put before the government in spring.

Safe disposal Nuclear waste is no match for ancient rock

A special type of clay found beneath Swiss soil could solve the dilemma of what to do with nuclear waste. 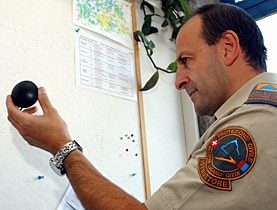 Hundreds of thousands of Swiss homes are subject to higher levels of the potentially harmful gas radon than is allowed under World Health ...