The purchase of new fighter jets is “a superfluous luxury for the daily air police”, argues Brigitte Crottaz. The social democratic politician explains why she is calling for the people to say “no” to the CHF6 billion fighter jet purchase on September 27. 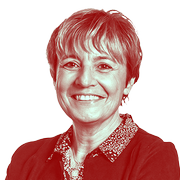 What are the real risks for our country?

A 2014 report by defence department experts concluded that the main risks to Switzerland’s security in the decades to come are terrorism, cyber criminality, and climate change, while the risk of a traditional war is highly improbable.

But military officials have nonetheless held on to this possibility, and now they want to be equipped with fighter jets that are clearly luxury planes superfluous to the daily needs of the air police.

Who are the potential enemies?

Switzerland sits at the geographical centre of Europe and enjoys good relations with its neighbours. If we can imagine an attack, it would come from further afield, flying over several countries before arriving here. It would have immediately triggered a reaction from North Atlantic Treaty Organisation (NATO) air forces.

As experts have underlined, a classic aerial attack against Switzerland is therefore hardly credible. An attack by drones or missiles is, however, a lot more realistic – and in this case, fighter jets would be of no use.

What is the role of the air police?

We are convinced that the air police are indispensable. But they must have a fleet adapted to the size of our country and the risks it runs.

More than 90% of missions undertaken by the air police are civilian: a private plane that has forgotten to connect its transponder, a passenger plane that has deviated from its flight path and is flying over our airspace without authorisation, surveillance of the airspace during important events (the World Economic Forum in Davos, for example, or a papal visit).

Which planes for the air police?

The fighter jets dreamed of by military officials have an autonomous flying time of one hour. The surveillance of our airspace therefore needs at least 40 planes. Those which the army wants to buy are expensive (models ranked the 6th or 9th most expensive in the world), pollutive (3.3l of kerosene/second) and noisy. They are little adapted to the geography of Switzerland and need 15 minutes just to warm up before taking off; a lost passenger plane crosses Switzerland from north to south in 15 minutes!

Light fighter planes used by many countries for their air police are more than sufficient for 90% of missions. They also cost CHF25 million each, have a flight autonomy of 2.5 hours, consume five to 10 times less kerosene and are less noisy.

Coupled with the FA-18 if necessary (10 to 20 missions per year), this would be an optimal scenario for effective air policing.

Why not maintain cooperation with our neighbours?

Our air police have never functioned 24 hours a day. Nobody noticed this fact before 2014, when a plane was hijacked and was escorted to Geneva by Italian and French jets.

We then learned that our air police operated within office hours and had agreements with the air police of neighbouring countries to intervene if necessary.

After this incident, air police working hours were extended until 10 pm, but it is only from January 2021 that we will have a 24-hour air police service. This will be more expensive but hardly more useful since there has been only one “rescue” carried out by our neighbours in recent years.

How to ensure the defence of Swiss territory in the face of threats?

The purchase of ultra-sophisticated, expensive, noisy, and pollutive planes will be completely useless in the case of a terrorist incident, cyberattack or climate catastrophe. But the CHF18 billion they will cost (CHF6 billion for purchase, CHF6 billion for maintenance, CHF6 billion to upgrade) will put such a strain on the military’s finances as to prevent it from purchasing super radars, as well as control systems and ground-to-air defence against drones and missiles – risks that are a lot more realistic than a traditional war.

‘The purchase of new fighter jets cannot be put off’