The first same-sex partnership was registered on Tuesday at a register office in Ticino after the entry into force of the new federal partnership act.

As of January 1, gay and lesbian couples are able to have their civil union officially recognised thanks to a new federal law passed in 2005.

According to the Italian-language RSI public radio station, the couple who registered their partnership have lived together for 30 years but wish to remain anonymous.

"The ceremony was moving and very well organised by the register officer," said Donatella Zappa, from the pro-gay marriage association "Imbarco immediato", who attended the ceremony.

"The couple who got married today are already quite old and have been looking forward nervously to what is the crowning moment of their lives," said Zappa.

The federal partnership law, which came into force on January 1, legally recognises same-sex marriages throughout Switzerland. Under the law, same-sex couples will be able to register their partnership at a registry office.

The civil union between gay couples remains distinct from marriages by name, but the new law means gay couples will have the same pension, inheritance and tax rights and obligations.

Foreign partners will receive residency. But the naturalisation process will not be made easier as with married couples.

Adoption and fertility treatment is forbidden and partnerships can only be dissolved by a court.

In June 2005 the Swiss voted in a national referendum by 58 per cent in favour of registered same-sex partnerships, which the "yes" campaign described as "wonderful".
To register their partnership, couples have to be over the age of 18, not already married or linked by a registered same-sex civil union, and not be parents. One of the two partners must be Swiss or have Swiss residence.
The union is recorded in front of a registry officer, but each partner does not have to say the traditional "I do".
Registered partnerships have existed in Geneva since 2001. 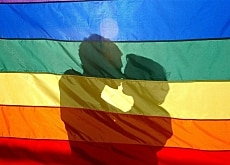 A Swiss offshoot of the Roman Catholic Church is to become the country's first officially recognised church to bless same-sex couples on a ... 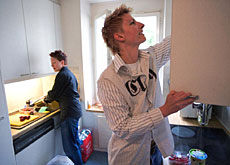 Gay rights’ groups are celebrating after voters on Sunday approved a new law allowing homosexual couples to register their partnerships. The ...