Switzerland has always been the crossroads of Europe and today there are “cultural routes” commemorating the historic highways and byways through the country. It is becoming an increasingly popular way to tour the country.

It’s not really a mass phenomenon like the exodus to the ski resorts every winter. Yet during the summer hundreds of thousands of people set out along the many historic trails which crisscross Switzerland.

A few figures suffice to establish the significance of hiking for tourism in Switzerland. The network of mule-tracks, paths and trails of all kinds, marked with the familiar yellow signposts, is over 60,000 kilometres long.

This is almost as much as the entire network of national, cantonal and municipal roads (71,000 kilometres). Every year, one third of the Swiss population goes on hikes, covering a total distance equivalent to 13,000 times the earth’s circumference, according to figures provided by the Swiss Hiking Federation.

Walking, as is well known, stimulates the imagination. Feel like travelling through time? Nothing could be simpler. Take the trail which leads from the Abbey of Saint Maurice in Valais, one of the great centres of Christianity during the Middle Ages, up as far as the Great Saint Bernard Pass.

Take it step by step, mile by mile. Once in a while, pause. Close your eyes and turn back a thousand years.

Maybe Sigeric the Serious walked on the very same stepping-stone where your shoes now tread. Appointed Archbishop of Canterbury in 990 AD, Sigeric set off on foot for distant Rome to receive the Pope’s blessing.

His travel diary, found in 1994 in the British Library, has helped scholars to reconstruct the Via Francigena, the famous network of highways and byways which led from England to Rome.

This part of the “Frankish route” which passes through Switzerland – from Sainte-Croix, in present-day canton Vaud, to Bourg-Saint Pierre, in Valais – is today one of the many cultural routes promoted by ViaStoria, the centre for the history of transport and travel, a spin-off of Bern University.

Trails that tell a story

It all started in 1988. The Swiss government, aware of the fact that traditional routes were in danger, decided to take an inventory of the historic trails of the country, recalls Hanspeter Schneider, director of ViaStoria.

It soon became apparent that the inventory should not be an end in itself. “We came to realise that a historic route is better protected when it is being used,” he explained.

This eventually led to the idea of offering a new tourist experience by mapping out “cultural routes”, using the information collected in the inventory. “The objective is that each of these routes should tell something of the history of Switzerland,” said Schneider.

Examples include the Via Salina, the salt route that links Bern to Salins-les-Bains and Arc-et-Senans, in France, along which, at some points, you can still see the grooves cut in the rock for the wheels of carts.

Or the Via Sbrinz, which takes you from the region of Stans, in canton Nidwalden, to the  Val Formazzo and which was already being used in the Middle Ages to transport Sbrinz cheese, valued for its good conservation properties.

For those interested in more recent times, there is the Via PostaAlpina, a trip through the steep winding roads of the central Alps that can be undertaken partly on foot and partly on the yellow buses of Swiss Post.

The Via PostaAlpina is the most recently-established of these cultural routes, and it is also the first to include a corporate partner in its name. Yet Schneider sees no risk of the project being hijacked for commercial gain.

“Post Bus is not just any private partner,” he said. “Its famous yellow buses have an almost mythic status and represent a very important element in the history of travel in Switzerland. For us this aspect is primary.”

A search for values

The tourism potential of these routes is well worth considering, according to people working in the sector. “In summer, 80 per cent of the people visiting our region come to hike,” explained Urs Zenhäusern, director of tourism for canton Valais.

“Up until fairly recently, hiking meant getting from point A to point B in so many hours, but today people want something deeper out of it. In this sense cultural routes are real treasures. On every route there is so much to discover, to do or to feel.”

Next year, as part of its annual campaign, Switzerland Tourism will focus on traditions and promote these cultural routes further.

According to Véronique Kanel, spokesperson of Switzerland Tourism, this is much more than a niche market. “There is quite a large audience for this – people interested in the religious, social and cultural side.”

She agrees with Zenhäusern’s analysis: “Populations in Western societies are ageing. So there are a lot more people around who have the time to do things at a slower pace, stopping for longer to really get to know a region.”

“These routes are a perfect example of this trend in the evolution of tourism.”

Furthermore, this kind of trip is meant to be done mainly on foot. And that is certainly also an important aspect, given the growing interest in sustainable tourism and soft mobility.

There are no precise figures yet that would make it possible to evaluate the impact of this kind of tourism. Schneider offers some data, however: “Among the packages offered by Hiking in Switzerland, those that link hiking with historical and cultural content are the ones that achieve the highest figures in the whole country. It’s an ideal combination.”

There are also packages available for cultural routes, which, apart from hotel bookings include various other services, such as transport of luggage. “The Via Spluga is one of the most popular routes. Every year there is a turnover of about a million francs for these packages.”

This is equivalent to about 2,000 people. The figure may seem insignificant at first sight, but if one considers that “95 per cent of people following these routes do so by themselves”, the numbers take on a new meaning.

The economic aspect, although it is important, should not obscure the main reason for this kind of project, namely the preservation of significant historic heritage, Schneider emphasised.

This objective has been achieved, in Zenhäusern’s view: “Big investments have been made in rebuilding, securing and opening up access along the whole length of the routes.”

Tourism Monitor Switzerland 2010 reports that the sporting activity most preferred by the majority of tourists is hiking.

In a poll of 9,000 people of 110 different nationalities about the sporting activity that most interested them in Switzerland, 68.8% of those who responded chose “a walk of less than two hours”.

Véronique Kanel of Switzerland Tourism says tourists from China, India and the Gulf states are probably an exception: sporting activities are not currently a priority for them in Switzerland.

There is no precise data about the users of the cultural routes, but Kanel thinks it likely that most of them are Swiss and European tourists, who are more interested in Swiss history or in European history in general than people from further away.

Besides doing research and consultancy on the historic travel routes in Switzerland, ViaStoria, which started as a spin-off company from Bern University, also exports its know-how abroad.

The centre has, for example, been working on a project in Nepal, which is shortly to be extended to the whole Himalaya region.

“In Nepal there is an important network of footpaths,” explains ViaStoria head Hanspeter Schneider. “In recent years it was realised that funds for development aid were being used to build roads.”

“Once there is a road, the traditional path is used less and starts to deteriorate. Given the importance of these routes for trekking, it is crucial to preserve them.”

The Cultural Routes of Switzerland project has won several awards. In 2008 it won the Alpine Convention’s 2008 competition for the most “innovative and sustainable tourism project”, and in 2007 it won the Milestone, the Swiss tourism prize.

“Most travellers wish to see a lot of remarkable things in a short time,” wrote Jakob Samuel Wyttenbach in one of the very first guide books to ...

By Julia Slater in Grindelwald and Meiringen

Historic routes to be preserved for posterity

Switzerland has always been a transit land, and today is no different. But building for the present often means destroying the past. Routes used ... 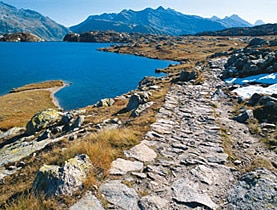 Following in the footsteps of the tortoise that beat the hare, a Swiss institution has won an international award for its innovative approach to ...

Lofty perspective A bird's-eye view of the Alps

Slovenian pilot, photographer and biologist Matevz Lenarcic takes us up in his plane. His exhibition, The Alps - A Bird's Eye View, is being shown ...

Mounting the mountain Competing to carry tourists up the Alps

Long before the Jungfrau Railway went into service, cogwheel trains were chugging up central Switzerland’s Pilatus mountain. But the railway now ...