Self-reliance is an integral part of Swiss history and economic policy, and the country stocks food, medicines and oil in large quantities to cope with possible shortages. What's kept on reserve?

In mid-April, the Swiss government announced its intention to put an end to the compulsory stockpiling of coffee in the event of a crisis in the country, making headlines around the world. After examination, the Federal Office for National Economic Supply (FONES)external link considered that coffee "was no longer a vital good" and that because of its low-calorie content it did not contribute to the daily energy intake required by a human being. The 16,500 tons of green or roasted coffee currently stored in the Alpine nation can therefore be sold if the project is definitively adopted.

What emergency stocks are we talking about?

Soap, screws, lubricants, cocoa and even tobacco… In the past, Switzerland used to build up basic stocks of all kinds of products. But the government's policy has evolved over time to adapt to threats. The nation's Economic Supply Act (NESA)external link was last revised in 2016 and now focuses on staple foods such as sugar, oil and cereals, energy sources (petrol and fuel oil) and medicines (antibiotics and vaccines). All these goods must cover normal needs in the event of a crisis for 3 to 6 months.

How are the stocks built up?

If the Swiss emergency supply system is attracting great interest abroad, it is mainly because of the way it is managed. Responsibility rests largely with the private sector, not with the authorities. For example, an importer of petrol will be required by law to store some of it for emergency use. This avoids the need to build up large reserves in one place.

In return, Switzerland finances the storage costs of companies through a reserve fund managed by the Reservesuisseexternal link organisation. The cost of managing these minimum reserves is CHF14 ($13.70) per inhabitant per year.

As a small country without access to the sea and dependent on imports, Switzerland has taken measures since the Middle Ages to ensure the supply of vital foodstuffs in the event of a serious shortage. But until the First World War, the constitution did not contain any articles to combat supply risks.

During the First World War, Switzerland experienced chaos due to a lack of preparation, which forced the authorities to create a federal food office responsible for all procurement tasks.

During the Second World War, Switzerland was better prepared. It used all economic means available, in particular the Wahlen plan, introduced in 1940 to increase agricultural production by using vacant land. As early as 1955, a new federal law explicitly focused on the compulsory reserves imposed on the private sector.

In 2019, do these reserves still have a purpose?

While the threats of war have almost disappeared in Europe, Switzerland's procurement policy is now more focused on market disruptions and the stability of its business location. For cost reasons, companies tend to have ever lower inventories. However, technical, logistical and crop failure problems in countries of origin can at any time undermine the supply of basic foodstuffs.

Last autumn, for example, it was necessary to start stockpiling mineral oils, fertilisers and animal fodder because of the difficulties encountered by merchant ships sailing up an almost dry Rhine River. In 2017, Switzerland, which has large reserves of medicines, also had to draw on its stocks to cope with the global shortage of an antibiotic considered crucial for fighting infections in hospitals.

Switzerland recommends that each household should have a stock of drinks and food for a period of seven days in the event of a disaster. Items of everyday consumption such as radios, candles, matches or toilet paper should also be stored.

However, according to a survey carried out by the government last year, one third of the Swiss population does not have sufficient emergency provisions. The survey also shows that the Swiss are not afraid of food shortages.

When asked why they maintain a personal stockpile of supplies, the Swiss say they are not necessarily thinking about the possibility of a crisis. Instead, it's about taking advantage of store sales, keeping things on hand for unexpected visitors and not wanting to go shopping every day.


Translated from French by Dominique Soguel 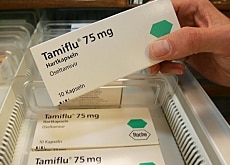 Swiss stock up for times of crisis

Switzerland has stockpiled enough of the drug Tamiflu to treat one quarter of the population should bird flu become a human pandemic. The country ...

A Swiss resident consumes 4,200 litres of water per day - just over the global average.

Inside Geneva Can the city of peace stop the arms race?

Can disarmament bodies in Geneva world help as the world appears to slide dangerously towards another arms race?

By Imogen Foulkes in Geneva