Child jockeys who race camels in the Gulf states could soon be replaced by robots thanks to a Swiss firm, which has developed mechanical camel riders.

K-team was commissioned to build the robots by the state of Qatar, which earlier this year prohibited children under 16 from being used as jockeys.

Team member Alexandre Colot was recently in the capital Doha to assess the performance of a robot called Kamel. He said the trials had been very successful and that the robots were fast catching up with their human counterparts.

"On a three-kilometre track, it ran at a maximum speed of 40km/h. We also did a full race on a five-km track and we were just ten seconds slower than the best time [recorded on that track]," he told swissinfo.

The shift from children to robots has been prompted by concerns over child welfare. Human-rights groups estimate that there are about 40,000 boy jockeys - some as young as four - who have been bought or kidnapped from countries in south Asia and forced to work as riders.

Groups say the children are often housed in appalling conditions and given only a subsistence diet to keep their weight down for racing. It is not uncommon for the boys to be injured during the races.

Apart from Qatar, only the United Arab Emirates has so far imposed restrictions on child jockeys.

K-team became involved in the Qatari project to find robot alternatives to child riders in 2003.

In all, it took one year and $1 million (SFr1.2 million) to develop Kamel in its present form. The project was finished in December 2004, but had to wait for a patent before going public.

"We’ve had ten engineers working on this project, two biologists and one designer, so it’s quite a large amount of work that has been done in one year," explained Colot.

The result is a robot which is designed to look like a small human. It fits into a specially designed saddle and has two arms that can operate the camel’s reins. It is also able to operate a whip.

Instructions are sent to the robot by remote control and walkie-talkie, operated by a camel handler who follows the racers in a vehicle.

The robot is also equipped with a global positioning system satellite beacon, as well as shock absorbers.

The plan is to have 20 robotic jockeys – which each cost around $5,000 - ready for the start of the racing season in October. Moves are already underway to set up an assembly plant, maintenance centre and training institute as a joint venture between Qatar and K-team, said Colot.

He added that Qatar, which owns the patent on the robot, was also considering selling the idea to other Arab countries where camel racing is popular.

But the engineer said that despite the authorities’ enthusiasm for the project - they want to replace all child jockeys with machines by 2007 - not everyone is so keen on the robots.

The camels have accepted their new mechanical jockeys– after a few teething problems – but the same cannot be said for some of the humans involved in the racing business. Some have expressed concern that robotic jockeys will ruin the lucrative sport, in which winners can pocket thousands of dollars.

"It will take time before all races are run with only robots," Colot told swissinfo. But he is confident that the mechanical riders will endear themselves to racing enthusiasts eventually.

"In Qatar, [human] jockeys cannot weigh less than 50kgs. The robot is only 25kg with a saddle so in time it will be more interesting to use the robots."

The first Kamels are expected to be in the saddle at the end of this year. 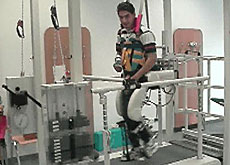 Robot helps patients back on their feet

Semi-paralysed patients and stroke victims all over the world are learning to walk again with the help of a Swiss invention. The Lokomat walking ...

Robots which dust, wipe, clean and scrub are being put through their paces this week at the first international cleaning robot competition in ...