Switzerland has helped draft principles paving the way for negotiations between Israel and the militant Palestinian group Hamas.

A senior Swiss foreign ministry official, Thomas Greminger, confirmed the existence of the so-called "Swiss document" on Thursday, which dates back to 2006.

Over the past few days, former Palestinian Foreign Minister and top Hamas official Mahmoud al-Zahar and Palestinian President Mahmoud Abbas, who is also known as Abu Mazen, have publicly discussed the existence of a declaration of intent - drafted by Swiss officials - opening the way for talks between Israel and Hamas.

Speaking at a celebration in Ramallah on Sunday, Abbas claimed that Swiss Foreign Minister Micheline Calmy-Rey revealed to him that despite Israel's stated policy that it would not speak to Hamas, representatives from both parties had met for clandestine talks in Switzerland.

The negotiations, held under the banner of "The Switzerland Accords" proposed the establishment of a Palestinian state within temporary borders in exchange for a 15-year ceasefire. "They spoke of a temporary state, but this is unacceptable," said Abbas.

In an interview with the Swiss News Agency, Greminger confirmed the existence of the "Swiss document", which he said was the fruit of several months' contacts with all Palestinian parties.

The Swiss diplomat insisted that Switzerland played the role of "creator of ideas" and not mediator between Israel and Hamas.

He declared that all parties had been informed at least informally, including Israel. However, the Israeli embassy in Bern refused to confirm this information.

Abbas was personally informed by Calmy-Rey, as "we didn't want to do anything behind Abu Mazen's back," the diplomat told the agency.

The document was handed over to the prime minister at the time, Ismaïl Haniyeh, a Hamas leader, who passed it on to Abbas.

For Greminger, the key element is that Hamas is ready to discuss a long-term ceasefire and not a peace accord. The Islamic movement would guarantee Israel's existence without having to formally recognise the Hebrew state, which it has always refused.

According to the media, a ceasefire would be accompanied by the ending of Palestinian rocket attacks against Israel, the end of targeted killings of activists by Israel, the lifting of certain roadblocks around the Gaza Strip and the exchange of prisoners.

On the Palestinian side, the situation became more complicated last summer when Hamas took control of Gaza, driving out Fatah security forces loyal to Abbas.

In reply, the Palestinian president sacked Haniyeh and appointed a new cabinet, which was backed by the international community, but which Hamas considered illegitimate.

"We hoped that this document might become the pillar of a unity government but that didn't happen," noted Greminger.

Unlike many other western countries, Switzerland says it is ready to discuss with all Palestinian parties involved in the Middle East crisis, both Fatah and Hamas. For Bern, a long-term peaceful solution is impossible without the involvement of the Islamic movement.

Contacts between Swiss diplomats and Hamas representatives are a thorn in the side of the Israeli authorities, which, like the European Union and the United States, consider Hamas a terrorist organisation.

At the end of December the Israeli prime minister, Ehud Olmert, ruled out ceasefire negotiations with the Islamist movement and said his military was fighting a "true war" against armed groups in Gaza.

But two Israeli ministers, Shaoul Mofaz and Binyamin Ben Eliezer, raised the possibility of a ceasefire with the organisation if it could put forward a credible proposal.

In the past, the Swiss foreign ministry has always been a strong supporter of Middle East peace initiatives. At the end of 2003 it played a key role in drawing up the "Geneva Initiative" – an extra-governmental, unofficial draft peace plan established between Israel and Palestine.

The Geneva Initiative proposed giving Palestinians almost all the West Bank and Gaza Strip and part of Jerusalem, drawing Israel's borders close to what existed before the 1967 war.

In return for removing most of the Israeli settlements in those areas, the Palestinians would limit their "right of return" to Israel to a number specified by Israel and drop all other claims and demands from Israel.

The Palestinian Authority, for its part, rejected the text and Hamas described it as a betrayal, as it didn't give Palestinian refugees full right of return.

The Israel's prime minister at the time, Ariel Sharon, also snubbed the text, calling it dangerous for his country. 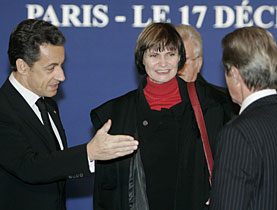 An international conference of donors, including Switzerland, has pledged $7.4 billion (SFr8.5 billion) in much-needed financial support to the ... 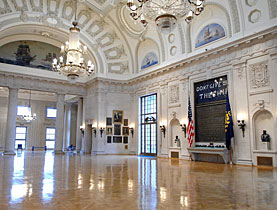 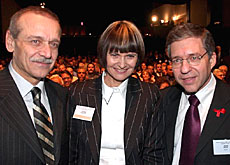 New peace plan gets off the ground in Geneva

Prominent Palestinians and Israelis joined former US President Jimmy Carter in Geneva on Monday to launch a Swiss-backed peace plan for the Middle ...