Six decades after the signing of its founding treaty, the European Union appears more fragile than ever. But a Swiss who studies European integration puts things in perspective.

Few people were excited by the white paper on the future of Europeexternal link that Jean-Claude Juncker, president of the European Commission, delivered in early March. His ideas on re-launching the European project, such as developing a “federal core” around Germany and France, lacked inspiration and were old, according to critics.

But did Juncker have any other options?

“He certainly didn’t want to walk into the lion’s den with elections set to be held in France and Germany that will have a crucial effect on the future of the EU,” René Schwok, director of the Global Studies Instituteexternal link in Geneva, tells swissinfo.ch.

“There were the personalities of the main players – Kohl, Mitterrand and Delors – but also the really favourable context resulting from the fall of the Berlin Wall,” he says.

European economic cooperation began with a treaty agreeing on a common market for coal and steel. Sixty years later, the European experiment ...

From crisis to crisis

That dynamic shattered during the 2000s with the failure of the European constitution, the economic and financial crisis in 2008, the euro crisis and then the Greek crisis. More recently have come the influx of refugees, Brexit and the rise of anti-European parties in several member states.

“The rise of populism remains the greatest danger facing the EU,” Schwok says, even though recent elections in the Netherlands, where the far-right candidate Geert Wilders did worse than expected, showed that the populist push is not inexorable.

“Every time there’s a problem in the EU, journalists, experts and politicians announce the end of the EU,” Schwok says. “These predictions do not always come true.”

But the latest threat is unique. Russia under Vladimir Putin has shown to be particularly interventionist in European electoral processes via its propaganda machine and support for anti-European parties.

“That’s new,” Schwok admits. “But we need some time to be able to measure the effect of this interference. Acts of manipulation by Putin can weaken the EU from the inside, but they can also have the opposite effect and further the marginalisation of these parties if they are perceived as pawns of Putin.”

One of the most common criticisms of the EU is the economic policy favoured by Brussels, seen as much too liberal for both those on the left and the sovereigntist right.

Schwok thinks that criticism is exaggerated, arguing that the EU is not purely free market-oriented like the United States, Asia and other parts of the world.

“[The European project] champions free trade in favour of competition and against protectionism,” he says. “But this opening of markets is accompanied by regulations concerning the environment, health and social security.”

“Don’t forget that European countries are the most socially minded in the world. But the states have not wanted those social responsibilities to be transferred to an EU level.”

EU critics also highlight the fact that citizens cannot vote on measures decided in Brussels and the lack of pan-European elections.

Schwok acknowledges their concerns and the increased interest in participative democracy and referendums across Europe. But he thinks such votes are best kept at the national level.

“It’s difficult to imagine such elections at a European level because they don’t exist at the heart of the member states. And when [these countries] consult their citizens by referendum, it’s in a spirit of a plebiscite,” he argues.

Switzerland and the EU

A troubled relationship. Switzerland has a turbulent relationship with the European Union. While many Swiss would be happy to join the EU, there ...

Even in Switzerland, which has a strong participatory democracy, the government can’t call a referendum. The law requires a vote if the constitution is changed, or citizens must call for it through collecting signatures.

An initiative option does exist for European citizens, but Schwok points out that it’s actually more like a petition. One million EU citizens can ask the European Commission to draft a bill, but the Commission can refuse their request, as it usually does. And, if the bill does get taken up, it is not submitted to the public for a decision, but to heads of state and the European Parliament.

That process differs from Switzerland, where Schwok says a decision “goes to the people even if the government is against it – as is often the case”.

Still, popular participation in legislative decisions doesn’t spare Switzerland from the doubts, rejections and mood swings that seize the citizens of EU member states. They simply appear on the political scene more quickly because of the country’s frequent votes – Switzerland’s meticulous clock of democracy generally smoothing out its more disruptive elements.

The EU: a brief history

The Treaty of Rome was signed on March 25, 1957 by Belgium, France, Italy, Luxembourg, the Netherlands and West Germany. It is a constitutional cornerstone of the modern European Union because it created the European Economic Community, a proposed single economic market for all member states.

Following the Single European Act in 1986 and the Maastricht Treaty in 1992, the European Community became the European Union with the goal of creating an economic and monetary union with a single currency. Today, the euro is used by 19 of the EU’s 28 member states.

More options Switzerland: ‘No alliance with Britain against the EU’

Should London should seek a Swiss-style relationship with Europe once Brexit is fully consummated? Hardly.

Talks between the European Commission and Swiss Presidents have failed to yield a breakthrough in the current impasse between the two sides over ... 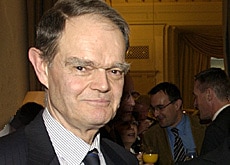 50 years of Swiss mistrust of Europe

Max Petitpierre was Swiss foreign minister when the Treaty of Rome was signed on March 25, 1957. His son, Gilles, talks to swissinfo about ...