The defence ministry says it sees no present danger from thousands of tons of munitions currently lying at the bottom of Swiss lakes. The shells and ammunition are considered so benign that regular checks may be discontinued after 2019.

The ministry's latest environmental impact survey drew the same conclusions as predecessors in 2008 and 2012 – namely that the munitions were not leaking and the water contained toxins of such minute levels that the water is safe to drink. In 2012, it concluded that it is better to leave the munitions where they are than to remove them with high risks of explosions.

Water samples showed levels of hazardous materials were at least 100 times below the safe limit, according to the results of the latest tests published on Friday. There was also no evidence of explosives leaking from munitions.

Therefore, the 8,120 tons of munitions dumped in in lakes Brienz, Thun and Lucerne between the 1940s and 1960s will remain where they are. They lie at depths of up to 200 metres and have been covered by sediments of up to two metres thick, making them difficult to recover.

Most of the munitions came from factories in Thun in canton Bern and Altdorf in canton Uri. Around one third date back to the Second World War and were dumped in 1948 on government orders after the catastrophic explosions of stockpiles shortly beforehand, including one in Mitholz in the Bernese Oberland that killed nine people.

In 2019, further sediment and water samples will be tested, the defence ministry said in a statement, which added that there is no need to continue the monitoring programme at regular intervals.

There are an estimated 8,210 tons of munitions lying at the bottom of some of Switzerland’s biggest lakes.

Other lakes have been a dumping ground for the Swiss army or used for target practice. Lake Walenstadt received weapons, Lake Alpnach gas masks, and barbed wire ended up in small lakes around the Gotthard Pass. 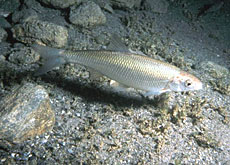 Munitions dumped by the Swiss army in Lake Thun must be removed and disposed of, says the Bernese cantonal fishery association. The weapons ...