The disappearance of a five-year-old girl more than two weeks ago has led to much soul-searching over child protection in traditionally "safe" Switzerland.

Philip Jaffé, professor of psychology at Geneva University, tells swissinfo there are certain steps parents can take but ultimately there is only so much they can do.

Missing children and child murders are rare in Switzerland. The disappearance of five-year-old Ylenia on July 31 in Appenzell has been headline news and captured the attention of the entire country.

swissinfo: The disappearance of Ylenia – along with that of the British girl Madeleine McCann – has understandably raised questions about child protection. Are we right to be afraid?

Philip Jaffé: No, because the abduction of children is a very rare occurrence just about everywhere – and especially in Switzerland. Our concern is really not commensurate with the actual danger or risk factor.

However, there's no doubt that there are not only more cases of child abduction but they have changed in nature. It used to be that child abductions were for ransom, such as the Charles Lindbergh and Getty cases; now we have paedophilic abductions.

swissinfo: How real is the threat from paedophiles? There is already a heightened fear in other countries, is it now Switzerland's turn?

P.J.: In many ways Switzerland has been blessed in terms of security in all senses of the word, and I think this is another sign of the loss of innocence of this country.

Switzerland is always a bit behind the curve in many ways. The fears are awakening and I don't put it past the Swiss mentality that in five years' time we'll be doing the same things as in Britain and North America: fingerprinting kids, taking DNA samples, putting electronic tags on them. I hear people talking about this and it's scary.

swissinfo: What can or should parents be doing to prevent this kind of tragedy? Is there anything they can do?

P.J.: There are two ways to answer this. Answer number one is that whatever you do you're probably not going to prevent the abduction of your child, because it's such an easy thing to do.

swissinfo: But there needs to be a balance doesn't there? Too much supervision can be bad for a child's development.

P.J.: No parent can be with their kids all day long so the real trick – and that's what good parenting is about – is to be sufficiently present. If you're too present, you create another set of problems for your kids and the first one is that you impede or inhibit their ability to develop a sense of autonomy and individuality, which is a big deal in terms of developmental goals.

swissinfo: As children return to school after the summer holidays, should we be putting them on their guard? What kind of prevention message should we be telling them?

P.J.: Parents need to send out some messages to kids and they have to provide some degree of awareness that there are multiple dangers out there in the world, without communicating their own anxiety to the child. If we take the walk from home to school: that's a dangerous journey. Obviously the worst threat is cars but you also have adults along the way who could be a danger.

swissinfo: At what age should children be allowed to play alone outside or go to school alone? Some schools encourage kids to go by themselves from the first year?

P.J.: I'd say certainly not before that. And I think then it depends on which child and how much practice each parent has had with that individual child. From there you can probably pick out a few kids who can do it without too much of a worry. But there'll be quite a sizeable minority, if not a majority, of kids that I wouldn't allow to go on their own to school.

Ylenia from Appenzell in northeastern Switzerland was last seen at a swimming pool on July 31, according to police, who have declined to release her surname in keeping with Swiss privacy laws.

That evening police found her backpack, cycling helmet and scooter beside a path in woods about 30 kilometres from the swimming pool.

On August 1, in the same forest, police found the body of a man who they said had shot himself in the head with a pistol.

A day earlier he had shot and injured a 46-year-old man allegedly taking a nap. The younger man fled and was taken to hospital. He has since been discharged.

Police said the dead man was a Swiss native who had lived in Spain with his wife since 1990. His van, also found in the forest, had Spanish number plates and had been seen near a swimming pool in Ylenia's hometown on Tuesday morning. 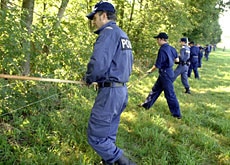 Speculation is rife in Switzerland over the disappearance a week ago of a five-year-old girl and the subsequent suicide of a 67-year-old man. On ...