A museum has opened in the town of Martigny, in canton Valais, celebrating the past and present of Switzerland's most famous dog breed, the St Bernard.

The institution also takes a look at the Great St Bernard Hospice high in the Alps, where the dogs earned their legendary status as lifesavers of travellers lost in the snow.

At the end of 2004, the friars at the hospice said a lack of manpower meant they would have to give up their world famous rescue dogs. The biggest fear was that this would mean the end of the animals' breeding programme.

The breed is in no danger of becoming extinct, but if the decision had been followed through, it would have been the end of an era. Only dogs bred at the hospice or in Martigny, in the French-speaking part of Switzerland, are classified as coming from the Great St Bernard.

Fortunately the Barry Foundation, named after the most famous of the rescue dogs, stepped in and took over the kennels in early 2005, ensuring that the canines will still be keeping watch over the St Bernard pass.

At that time the idea of a museum on the history of the animals was also mooted. It was accepted and the museum has been opened in a former arsenal building.

"It was an old dream," museum director Bernadette Pasquier told swissinfo. "But thanks to a SFr5 million ($4 million) donation from the Bernard and Caroline de Watteville Foundation, the dream has become reality."

The breeding programme has also been included in the museum, bringing the permanent exhibition to life.

Although the dogs are the centre of interest, the role of the hospice sitting on the alpine road between Switzerland and Italy has also been explained.

Friars have been living on the 2,500-metre-high pass for nearly 1,000 years, and have been dispensing spiritual guidance for the past three centuries. The hospice itself was built on the pilgrim route between Canterbury in England and Rome. According to legend, it was founded by Saint Bernard of Montjou.

The dogs - originally a crossbreed - are first believed to have appeared on the pass in the middle of the 17th century. Their presence was recorded in paintings and drawings dating back to 1695 and has been attested by official documents since 1703.

The hospice was built in a place were extreme weather was the norm. Apart from July and August, visitors can expect a rough welcome from the elements.

Early pilgrims had a tough time, with little more than a steep, narrow and poorly maintained road to take them across the mountains. They had worry about avalanches, snowfall, clouds and wind before they could seek refuge at the hospice.

The friars often knew when someone was on the way, and when night fell, would go out looking for travellers who had failed to arrive. The dogs would accompany them, helping uncover those who were lost.

Whether the dogs used their own initiative to go out and look for missing travellers by themselves carrying a barrel of rum around their necks is highly unlikely, even if it is part and parcel of the legend. There is no mention of the barrels in hospice chronicles.

But the legend of the St Bernard dog lives on. A short film shown at the museum gives an idea of the extent of the rescue work carried out by these animals.

The most famous of them all, Barry, is on show in all his mounted glory. On loan from the natural history museum in the Swiss capital, Bern, he will eventually be replaced by a copy.

Barry, who died at age 14 in 1814, is supposed to have saved 40 people - with or without a barrel of rum. He did not die on the job in a snowstorm either, but in the relatively comfortable surroundings of the Swiss capital.

The rescue dog's reputation lives on. At the museum, books, paintings, advertisements, stamps, bottles and chocolate are testimony to the hound's enduring image.

And like the crossbow, Barry has come to symbolise all things Swiss.

The Great St Bernard Hospice has honoured Barry by always having one dog with the same name.

The mounted Barry shows a large and strong dog, but much smaller than the modern St Bernard.

He was acclaimed for his rescue work, having saved around 40 people, although this number is disputed since detailed records of successful rescues were not kept.

The hospice dogs' work was recognised far and wide. Chronicles, as well as verbal reports by Napoleon's soldiers who crossed the pass with him in 1800, tell of the many lives saved by these dogs in the face of "the White Death".

The fame of the St Bernard then known as the "Barry-dog", spread throughout Europe in the 19th century, and Barry himself became the epitome of the rescue dog. 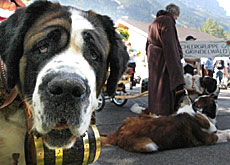 The future of St Bernard rescue dogs in the southwest of Switzerland has been secured. A new foundation is to look after them and a former Geneva ... 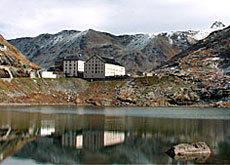 The friars who run the lodgings on the Great St Bernard are ensuring that the long and colourful history of the pass is not forgotten. "We are ...