The Swiss Union of Police Officers has warned that a shortage of personnel is at least partly to blame for an increase in violent crime.

The warning comes just days after the Federal Police Office revealed that cases of murder and acts of violence were on the rise.

According to official crime statistics published last week, police reported 213 murder cases involving a total of 244 victims last year – up nearly 14 per cent on 2003 and the highest level since 1990.

Cases involving serious bodily injury also rose, while reported incidents of violence against the authorities increased by over 20 per cent.

But they add that 2004 was a particularly bad year.

"The number of cases of violent crime was too significant last year for the increase to be attributed solely to this trend or to natural fluctuations between one year and the next," the Federal Police Office said in a statement.

The office's Henriette Haas cites a recent change in the law as one explanation for the rise in the number of incidents last year.

"Before the new law, victims could ask police to drop the charges if they decided after initially reporting the crime that they didn’t want the case to be pursued. But now officers will continue investigations regardless," said Haas.

The Swiss Union of Police Officers is sounding the alarm.

The union's general-secretary, Jean-Pierre Monti, told swissinfo that the drive to cut public spending was putting "intolerable pressure" on police officers across the country.

He expressed particular concern about the rise in acts of violence against the authorities and law-enforcement officers.

"We just don’t have the staff we need to be able to work on crime prevention," said Monti.

The union says Switzerland is short of around 1,600 police officers and is appealing to the authorities at both a federal and cantonal level not to make "false economies" by implementing even more cutbacks.

Monti believes there is a direct link between the shortage of officers and the rise in cases of violent crime.

"We can see that violence on the streets of Swiss cities is increasing... and this may well be because there is a much less visible police presence."

Daniel Fink, head of criminal-justice statistics at the Federal Statistics Office, told swissinfo that there were currently around 16,000 police officers in the country - not including border or military police.

He said the number had remained relatively stable since 2000 and was unlikely to change significantly in the future.

Haas said the Federal Police Office was not in a position to comment on a possible link between pressure on jobs and rising crime.

"The political question of whether it may be due to a lack of officers is not for us to answer," she said, adding that her office’s role was to collate rather than interpret data submitted each month by police officials in the country’s 26 cantons.

Haas confirmed that the statistics were in line with crime predictions contained in the Federal Police Office’s annual domestic-security report, published earlier this year.

Publication of the latest set of figures comes less than three months after senior police officers in Zurich criticised a proposal to shed between 170 and 200 jobs within the 1,700-strong cantonal force, saying the move could lead to a rise in crime.

Fears about the impact of job losses were raised after the cantonal authorities unveiled a wide-ranging package of public-spending cuts.

"It is clear that the public purse is coming under enormous pressure," said Monti.

"But the situation in Zurich is extremely serious... and domestic security should not have a price tag attached to it."

Statistics from the 2004 crime survey: 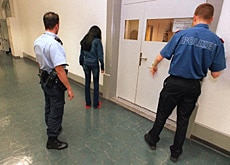 Police warn of rise in crime if jobs are lost

Police in Zurich have criticised a proposal to shed as many as 200 jobs within the force, saying it could lead to a rise in crime across the canton. 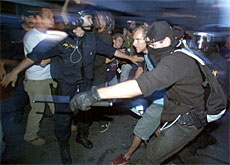 There has been a significant rise in the number of violent crimes committed in three of Switzerland’s most populous cantons. In Zurich, acts of ...