The situation in Naples – rubbish has been uncollected in the Italian city for several weeks – has shown what can happen when a waste disposal system breaks down.

Switzerland itself generally has a successful waste management policy. But although the Swiss are great recyclers, they are among the worse offenders in terms of the quantity of rubbish produced.

Poor waste disposal infrastructure and the rubbish tax have been blamed for the situation in Naples, as has the low recycling rate. There has also been interference by the Camorra, the Neapolitan version of the Mafia, which has a hand in the waste business.

Naples has therefore resorted to reopening old landfill sites and exporting rubbish to other regions of Italy and to Germany. Swiss waste incineration companies are also in talks with Naples.

The principles for best managing waste to ensure a low impact on health and the environment have long been recognised. The European Union has set out four Rs: reduce, reuse, recycle and recover.

Switzerland, although not a member of the EU, is considered a model in waste disposal. More than five million tons of urban refuse was produced in the country in 2006, of which around half was recycled. Most of the rest was incinerated.

The more than 50 per cent recycling rate makes the country among the greenest in Europe. For some materials, such as glass, the rate rises to 95 per cent.

"The margins for improving recycling of domestic rubbish are not very big, as we already recycle a lot," said Mathias Tellenbach, deputy head of the Waste and Raw Materials section of the Federal Environment Office.

Improvements could be made, however, in the plastic materials used in industry, he added.

To help encourage recycling, many local communities have introduced a rubbish bag tax. Rubbish bags have to carry a sign – a sticker or printed on the bag – that the tax has been paid. Recycling is generally free.

According to the federal office, 3.65 million tons of refuse went through the country's 29 incineration plants in 2006, of which 417,000 tons came from neighbouring countries.

Incinerators produced around 3.1 per cent of electricity in Switzerland in 2006.

Only a small part of the waste ends up in landfill sites. "It has been prohibited since 2000 to throw combustible or chemically unstable materials into landfill sites," said Tellenbach.

"Only the remains of combusted waste, some building materials and industrial waste are still going into rubbish dumps."

Here again Switzerland leads the way. In many other countries, the use of such sites is much higher – in Italy it is 63 per cent, Greece, 91 per cent, and Britain, 78 per cent.

But Switzerland falls down when it comes to the first R: the reduction of the use of raw materials.

On average the Swiss produce 714 kilograms of waste per person each year, making them among the worst offenders in Europe.

Tellenbach says that such statistics should be approached with caution. "It is precisely because the waste collection system is so efficient that no refuse quota escapes the statistics," he said. "In other countries the statistics could be less complete."

"Comparisons between countries are always difficult, however it is true that each inhabitant of Switzerland produces annually an amount of rubbish that is equivalent to ten times their own body weight," said Tellenbach.

swissinfo, based on an article in Italian by Andrea Tognina

Authorities in Naples started shipping some of the city's two weeks' worth of uncollected rubbish to other parts of Italy on January 11.

The latest crisis is one of a series of waste collection breakdowns going back almost 15 years.

It is due to the fact that the Campania region produces more rubbish than it can dispose of acceptably.

Nearby landfills are saturated and residents oppose the construction of new dumps and incinerators, which they say pose health hazards.

Government plans to open four new dumps have been blocked by angry residents and the Camorra, the Neapolitan mafia, continues to make money by controlling the illegal dumping of millions of tonnes of toxic waste. 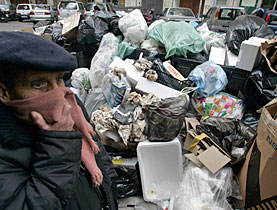 As the rubbish crisis continues in Naples, Swiss waste incineration companies are in talks with the city authorities in Italy over importing the ... 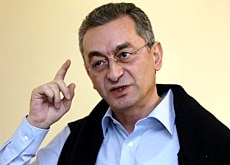 Being green is good for business