The grounding of the Swissair fleet on October 2, 2001, could have been avoided had the management kept a proper grip on the carrier's finances.

In a damning indictment, a report by Ernst & Young says management incompetence and a lack of aviation experience brought down Switzerland's national airline.

Ernst & Young's Ancillo Canepa was highly critical of the situation in general.

"When such huge amounts [of money] are involved, you rarely see such a debacle," he told swissinfo.

Few Swiss will forget the national humiliation felt on October 2 and 3, 2001, when pictures of thousands of stranded Swissair passengers were beamed around the world.

Airline bosses blamed the fallout from September 11 for pushing Swissair over the edge. But an Ernst & Young inquiry into the debacle - made public on Friday - maintains that the cash was there to keep the airline flying, at least temporarily.

The report contradicts the version of the bankrupt SAirGroup -Swissair's parent company - which blamed the grounding on a lack of liquidity, saying it only had SFr14.5 million ($10.6 million) in its coffers.

Ernst & Young says Swissair actually had a total of SFr50 million at its disposal on the morning of October 2. It adds that a further SFr73 million could have been tapped had it not been for "administrative inadequacies".

"The liquidity issue alone would not have mandated the grounding of flight operations, at least not on October 2, 2001," said the report.

The report added that just before the filing for debt-recontruction at the end of September 2001, payments of about SFr150 million were made, which were not essential to maintain business operations. But the report does not say who received the money.

It said the funds could have been used instead to avoid the grounding of the fleet.

Former Swissair chief and board member, Mario Corti, rejected outright the claim that the grounding could have been prevented.

"I vehemently reject the suggestions of Ernst & Young," he said. "On October 2 [2001], we had around SFr4 million in Swissair's account and SFr10 million in SAirGroup's."

The inquiry also heavily criticised Swissair's board of directors for their handling of the crisis.

"According to the information available to us, no board member had solid experience in the operative management or in monitoring an international airline company," said the report.

The report was also scathing of the implementation of the "hunter strategy" - a disastrous expansion plan under which Swissair acquired minority stakes in other mainly loss-making airlines in Europe.

The report said there was no overall investment plan and that the board did not have the strategy monitored by professional risk managers. It added that there was inadequate financial information in place for this purpose.

Ernst & Young went on to slam the board for allowing management to buy into airlines which were financially unsound at excessive prices and for not intervening when acquisition budgets were exceeded.

"During the decision-making phase of the acquisition, SAirGroup behaved hectically and during the implementation phase with little diligence," said the report.

The enquiry confirmed that the hunter strategy had overreached itself and did not confirm to the original plan set out, which was a moderate investment strategy with minority investments ranging from ten to 30 per cent.

"From the outset, the implementation of the hunter strategy did not conform with its conception," noted the report.

"Investments in airline companies were acquired which exceeded 30 per cent and which did not fulfil or only partially fulfilled the criteria set forth in the hunter strategy."

It was Corti's predecessor, Philippe Bruggisser,who was the architect of the doomed strategy.

Bruggisser expressed regret that things had gone wrong but also defended himself.

"I always acted to the best of my knowledge and conscience in the interests of Swissair and tried to do my best for the company," he said.

Also criticised was the fact that the board allegedly allowed the SAirGroup to bypass EU law in the acquisition of certain airline investments.

The fact that the Swiss people voted against the joining the European Economic Area (EEA) in 1992 left Swissair no entry into the European market.

This meant that Swissair had to make alliances with other European airlines to maintain its competitive position in Europe.

The carrier set itself the target of becoming the fourth most important airline in Europe, and the SAirGroup assumed full financial and commercial risk for this plan.

"The unconsolidated and consolidated financial statements for 1999 and, to a much greater degree for 2000, did not fairly present the economic and financial situation of the SAirGroup," said the report.

It said that by the time SAirGroup's unconsolidated and consolidated financial statements for the year 2000 were made public in 2001, the ability of the SAirGroup to continue as a going concern was seriously jeopardized.

The law firm overseeing Swissair's liquidation, Wenger Plattner, said the report would be studied in depth before any decision was taken on possible legal action against Swissair's former management.

All four political parties in government in Switzerland have reacted to the report by demanding legal action.

The report says the grounding of the Swissair fleet on October 2, 2001, could have been avoided.
SAirGroup blamed the grounding on a lack of liquidity, saying it only had SFr14.5 million in its coffers.
Ernst & Young says Swissair had SFr50 million at its disposal on the morning of October 2 and a further SFr73 million could have been tapped had it not been for "administrative inadequacies".
The report heavily criticises top management for their handling of the affair.

The court-appointed administrator of the Swissair Group, Karl Wüthrich, said on Friday an investigation would examine responsibility for the ... 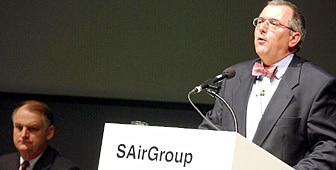 Claims against the collapsed SAirGroup are not likely to be settled until 2004, the company's administrator told a creditors meeting on Wednesday.